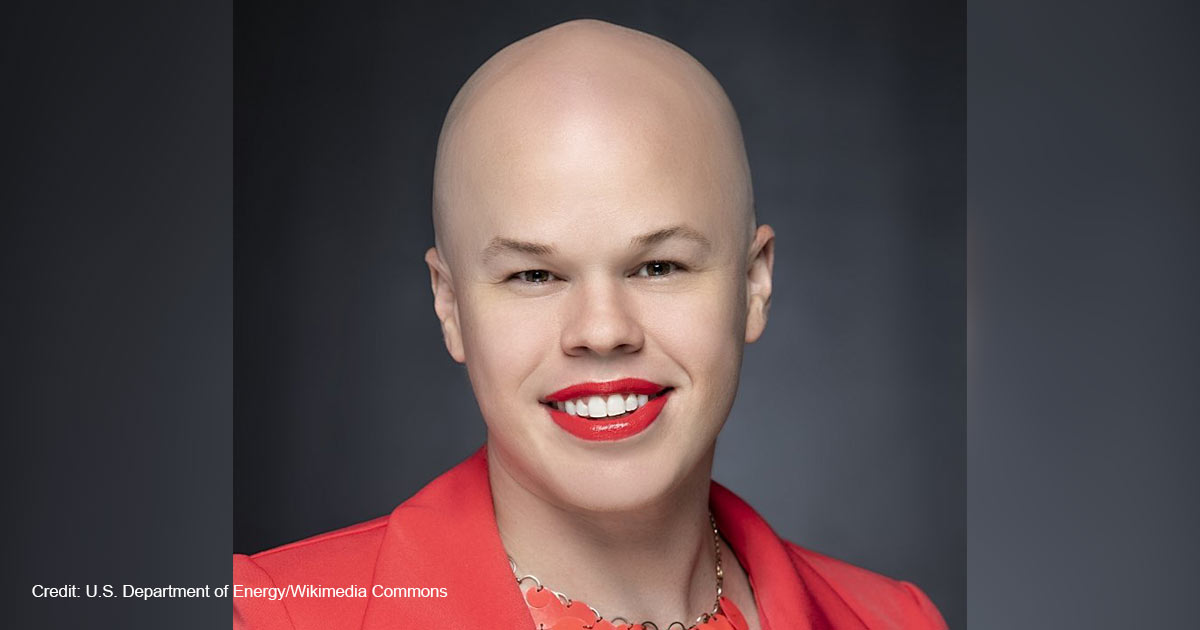 The Biden administration has fired Sam Brinton, the gender-fluid official in charge of disposing of the nation’s spent nuclear fuel, after allegations he stole two women’s suitcases. Brinton’s lipstick-laden penchant for teaching “kink” sessions raised public alarm, and his “ever-changing story about abuse” played a key role in the ban of reparative therapy.

President Joe Biden announced the 35-year-old Brinton would act as “deputy assistant secretary for spent fuel and waste disposition” in February. “Sam is also a well-known advocate for LGBTQ youth and helped to secure protections against the dangerous and discredited practice of conversion therapy in more than half of the country,” Brinton’s DOE biography, which has since been removed from the website, stated. “They identify as gender-fluid and use the pronouns they, them, and theirs.” The page has since been removed.

Police accuse Brinton of stealing two women’s suitcases from airports in Minneapolis and Las Vegas. Officials say the Biden official stole a navy blue Vera Bradley bag worth $2,325 at the Minneapolis-Saint Paul International Airport on September 16. Security footage shows Brinton suspiciously removing a luggage tag from the suitcase before leaving the airport, they say. The “genderfluid” former nuclear secretary reportedly said the mix-up happened due to exhaustion, before calling police back to admit he lied. Media reports of Brinton’s arrest led Las Vegas security to identify him as the suspect in the theft of a woman’s luggage worth more than $3,670 in July.

Between the two alleged acts of theft, Brinton hosted “kink 101” seminars on college campuses and fetish seminars. One of his presentations was titled “Spanking: From Calculus To Chemistry.” He also indulged in “pup play,” in which his partners dressed as puppies.

Brinton, who is legally married to another man, has participated in events held by the “Sisters of Perpetual Indulgence,” a drag troupe that dresses as nuns. He also boasted of wearing female clothing and inspiring conversations about genderfluidity at work, financed by U.S. taxpayers.

Last Tuesday, a group of 16 Republican congressmen led by Rep. Andrew Clyde (R-Ga.) asked Energy Secretary Jennifer Granholm to ask for Brinton’s resignation “following felony theft charges,” said the letter. “As an appointed official, Sam Brinton represents both your Department and the United States. It is simply not possible for an individual to represent American values and simultaneously violate the felony laws of the land.”

In a nod to Biden’s policy of appointing minorities for the sake of representation and normalizing deviant behavior, the congressmen wrote, “we implore you to set aside petty politics and appoint only the most qualified and dedicated individuals to influence America’s energy sector.”

Brinton first came to national popularity in 2010-2011 while offering horrifying tales of torture designed to stop him from being attracted to the same sex. Brinton equated so-called “conversion therapy” with abuse everywhere from state legislatures to the United Nations’ Committee Against Torture, often under oath.

In his earliest testimony, Brinton — the son of Southern Baptist missionaries — claimed when he told his parents he felt attracted to other men at age 11 in the 1990s, “Dad just started punching” and sent him to the emergency room multiple times. “My dad has held a gun up to my head multiple times.” They then took him to undergo therapy.

“The therapist ordered me bound to a table to have ice, heat and electricity applied to my body. I was forced to watch clips on a television of gay men holding hands, hugging and having sex,” wrote Brinton in a 2018 New York Times op-ed.

Trying to remember the name caused him to “revert to near suicidal tendencies,” putting his safety and very life in danger, Brinton claimed.

“Brinton’s testimony about his alleged experience played a key role in banning legitimate practices across the nation,” Dr. Joseph Nicolosi, who practices Reintegrative Therapy, told The Washington Stand. “Brinton claims he was in torture therapy as a young child for years and can’t remember the therapist’s name. He later claimed the therapy took place in his twenties. But even as he was attacking therapies that don’t exist, he was engaging in sadomasochism and simulated bestiality with young men and women.”

Wayne Besen, who identifies as gay, wrote at LGBT Nation, “Has Sam Brinton’s story always been too good to be true?” Besen accused Brinton of “utter shamelessness” and an “unquenchable desire for self-promotion.” And he charged “some of America’s top LGBTQ+ activists and organizations,” including the Trevor Project and the National Center for Lesbian Rights, with being “willfully blind to Brinton’s shortcomings.”

Family Research Council questioned Brinton’s veracity multiple times over the years, pointing out such inconsistencies as a picture of the family at Brinton’s graduation after Brinton said his father threatened to murder him on sight the next time they met.

“My colleagues and I warned lawmakers in California and Massachusetts, and the LGBT activist groups which were sponsoring him, about Sam Brinton’s ever-changing story about abuse he allegedly underwent in therapy because of his LGBT attractions,” Nicolosi told TWS. “Reintegrative Therapy is scientifically shown to decrease suicidality among men with same-sex attractions by addressing underlying traumas … Of course, no one cared about his credibility until he got caught stealing luggage.”

Brinton will go to court in Minneapolis next Monday, December 19. Brinton faces five years in prison and a $10,000 fine on the Minnesota case, if convicted.