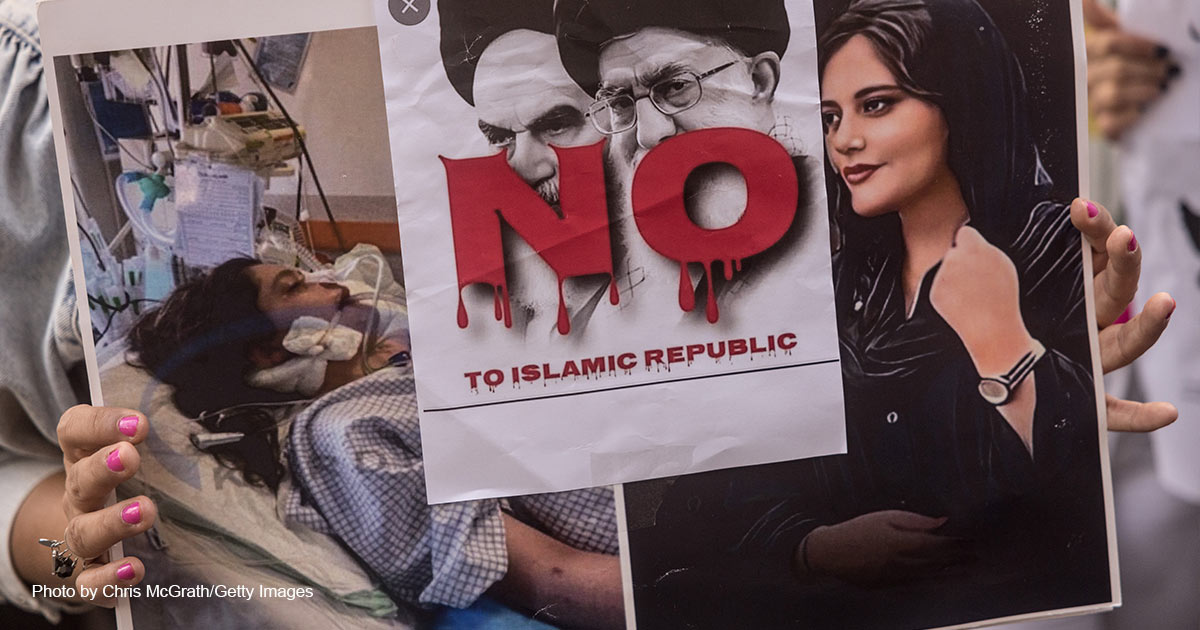 One afternoon in mid-September, 22-year-old Mahsa Amini was viciously attacked in Tehran by Iran’s “morality police.” According to the Associated Press, Mahsa was “severely beaten by the security forces in a van and was taken to the capital’s Kasra Hospital due to the severity of her injuries. ... Reports indicate that her death was due to a fracture on her skull due to heavy blows to her head.”

The reason for Mahsa’s arrest and subsequent abuse is hard for westerners to fathom. She was attacked because she was not properly wearing her hijab, a required-by-law head covering for all women, Muslim or not. Some of Mahsa’s hair was exposed. And for this she was beaten to death by enraged “morality police.”

Iran’s authorities surely underestimated the surging anger that followed this attractive young woman’s death. In the first days afterward, the streets of Tehran were increasingly flooded with angry protestors. And until today, protests have spread to every corner of Iran. Defiant women have publicly ripped off their hijabs and burned them openly in the streets; angry men and boys are bravely marching alongside the women, fighting off the police and declaring their solidarity.

The response of the regime has been vicious — even deadly — but has failed to quell the crescendo of chanted protests. In intense standoffs, the police and other authorities have been assaulted.

For decades, those of us who have reported on Iran’s religious oppression have noted that abuses of women and Christian converts are widespread. Why? Because both are perceived by religious leaders as threats to their radical Islamist cult, which rules the country with male iron fists. But worst of all in the mullahs’ eyes are former Muslims who have converted to Christianity. Farsi/Persian-speaking Christians who meet in “house churches” are illegal; they frequently suffer violent invasions, arrests, and sometimes death. They are at least as provocative as Mahsa, and likewise suffer severe abuse.

Radio Free Europe/Radio Liberty reported in May 2022, “One of the most striking trends in 2021 was the increased involvement of Iran’s powerful Islamic Revolutionary Guards Corps (IRGC) in the crackdown on Persian-speaking Christians. The IRCG [sic] was responsible for 12 of the 38 documented incidents of arrests of Christians or raids on their homes or house churches in 2021.”

Iranian Christian converts often point out that the harsh violence which takes place in the name of Islam — including the recent uproar over women’s hijab violations — has deeply disillusioned young Muslims. Unsurprisingly, many of them have been introduced to Jesus and have converted to Christianity in ever-increasing numbers.

To make matters worse for the regime, today’s Christian conversions bring together two of the mullah’s most despised rivals: courageous women like Mahsa and spiritually-inspired Christian believers. It is widely reported that women comprise a substantial portion of Iran’s house churches’ leadership. In fact, one underground church overseer told The Washington Stand that seven of the 12 churches he works with are led by energetic, courageous women — all converts from Islam.

And for the first time since the 1979 Islamic Revolution, during the recent demonstrations, Iran’s Christians have publicly spoken out against the regime. In an act of great courage, 300 Christian leaders have added their names to the following declaration:

We are very pained and angry about the murder of Mahsa Amini. As before, our hearts are crushed and bleeding from the countless murders of freedom-loving men and women.

But we don’t think it is enough to only express our solidarity in words, and instead want to join in practical action against this bloodthirsty 43-year-old infection on our society.

For days the brave people of Iran have come to the streets to take a stand against oppression, tyranny and dictatorship.

Men and women, old and young, from different ethnic groups and religions are shouting for freedom, equality and justice — a loud cry that comes from throats full of suffering and pain, a suffocating suppression of more than 40 years.

Despite the fact that the regime has pointed guns and tear gas at the people and has narrowed the Internet channel, these days we are witnessing more and more people’s courage, dedication and unification with the intention of a complete revolution; a revolution against oppression, which not only aims to destroy women but also to destroy human beings and humanity.

We Christians have not been spared from the brutal repressions since the first day that the Islamic Republic stepped into our country — from serial murders to imprisonment, torture, humiliation, rejection, flogging, exile, forced veiling, deprivation of privacy even in our own homes, deprivation of work and education, confiscation of property and destruction of our churches, which are only part of the regime’s desperate attempt to crush us.

We have suffered but we have not retreated. For our Messianic beliefs and belief in freedom and choice of thought, by saying a firm “no” to compulsory religion, we have proudly accepted the punishment of standing and resisting for years, both ourselves and our families.

We all sympathize. Our pain comes from the wounds caused by the sharp claws of oppression on our bodies; a body that is taller these days but screams for freedom with all its heart.

So, we are with each other, and we stay and we are not afraid. As we consider ourselves a part of the body of society, and not separate from it, we are still with each other in nationwide protests and for people’s rights inside and outside of Iran, both virtually and on the ground. We continue. And we share in the cost of fighting for Iran’s freedom from captivity and darkness.

What price will be paid by those 300 outspoken Christian signatories? The cost for their courage could be excessive and perhaps even deadly. However, along with more than a million Iranian Christian believers, they are counting on a lasting and eternal reward — one that is not of this world.