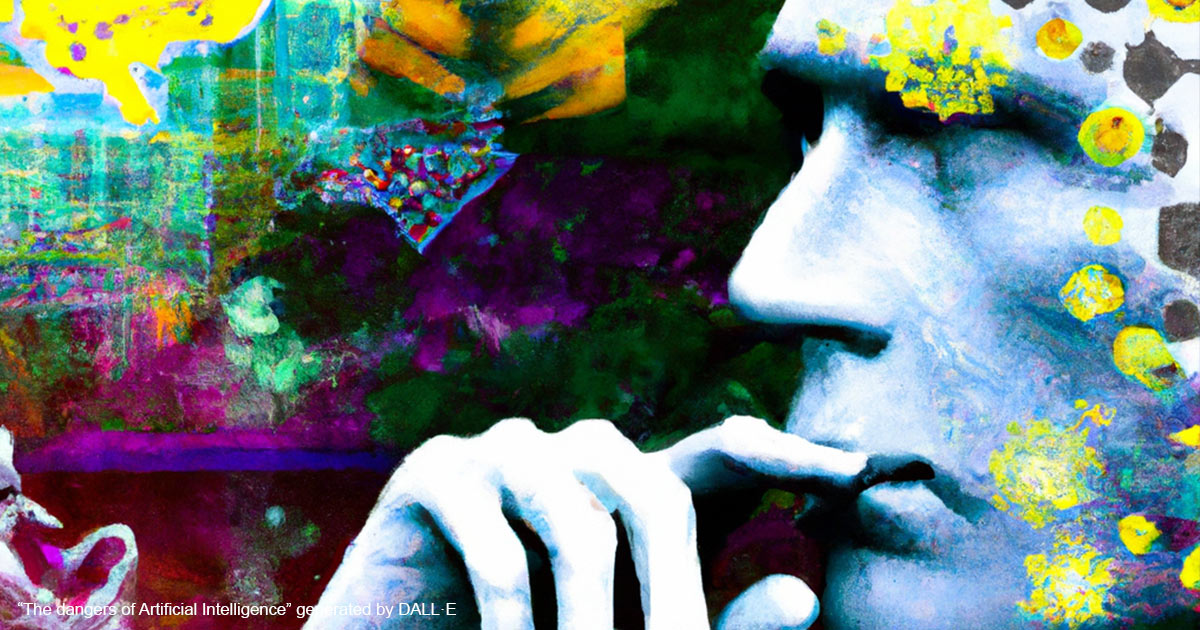 Almost a decade ago, on a whim, I answered an unknown call to my cell phone. It was some sort of survey, and I for once decided to play along to see where it was going. There was something peculiar about the way the voice on the other end spoke that raised my suspicions, so I asked, “Are you a robot?” The voice chuckled and replied, “Am I that bad? I hope my boss isn’t listening to this call.” He then proceeded with the survey. Still not completely convinced, I interjected, “Sorry, but before I go on, I just need you to answer one question for me: What color is the sky?” The voice then quickly said, “Hmmm. I’ll have to research that and someone will get back to you.”

The game was up, and the survey company hadn’t programmed for that. But even 10 years ago it bothered me at just how good the computer was at imitating human interaction. That was a decade ago. Now, the rapidity with which AI seems to be gaining intelligence is incredible.

For example, I didn’t write this:

The rise of artificial intelligence (AI) is transforming industries and society at an unprecedented pace. From self-driving cars and intelligent virtual assistants to sophisticated medical technologies and advanced manufacturing systems, AI is increasingly being used to automate and improve a wide range of functions and processes. As AI continues to advance, it is raising important questions about its potential impact on the workforce, privacy, and the very nature of intelligence itself.

The paragraph above was written entirely by the AI program ChatGPT, a new AI bot from OpenAI, a group that describes its mission as ensuring, “that artificial general intelligence (AGI) — by which we mean highly autonomous systems that outperform humans at most economically valuable work — benefits all of humanity.” How did the computer do? To be honest, it sounds to me more like the opening to a high school essay. It doesn’t necessarily draw the reader in — just the facts ma’am. But maybe that’s my own bias. After all, from a simple command it’s almost like it knew what I wanted. I instructed the bot to “write a lede for an article on the rise of AI,” and out popped the text above.

If you think this sounds a little too biblical, you’re probably right. When Moses was on the mountain doing covenant business with God, his brother Aaron was busy placating the people with a golden calf, which they then proceeded to worship. When confronted later by Moses, Aaron’s excuse was that it just happened: “I said to them, ‘Let any who have gold take it off.’ So they gave it to me, and I threw it into the fire, and out came this calf” (Exodus 32:24, ESV).

Of course, Aaron’s idol didn’t simply emerge from the fire, just as the paragraph above didn’t simply emerge from the mind of a microchip. Both required levels of design and craftsmanship. Aaron and his craftsmen forged the golden calf from available materials and a model for design — it was an image of a calf, if you will. The artificial writer is likewise forged by human programmers and a model for its design — the image of a human, imago hominis if we want to get Latin about it.

These may not be the droids we were looking for, but is it fair to compare AI to the idols of antiquity? After all, one might argue, no one is worshiping artificial intelligence — certainly not in the same way as the Israelites on the mountain. No, we don’t offer sacrifices, we just talk to our machines and increasingly expect them to answer us. Nothing similar there at all.

The ancient biblical prophet Isaiah spoke often about idols and humanity’s relationship to them. He warned the Egyptians that the Lord would, “confound their counsel; and they will inquire of the idols and the sorcerers” (Isaiah 19:3). He also readily mocked the makers of idols, who use half of their materials for crafting their objects of worship, and then use the other half as fuel to cook their food (Isaiah 44:9-20).

AI isn’t new. In pop culture, the concept has been around since “The Adventures of Pinocchio,” echoed in Hasselhoff’s car in “Knight Rider,” and taken to the stars in C-3PO and HAL. In real life, hints were seen in early industrial automation, and now it’s something we use every day. The Lensa app is painting our portraits, and DALL-E 2 created the image used with this article from a simple set of instructions. Using something isn’t necessarily idolatry. I’m not about to give up AI traffic modeling apps which shorten my commute, and I can use them without worshiping them (they’re right down to the minute most of the time, but sometimes they’re way off). AI can help us in tremendous ways, but we must keep top of mind that AI is only as good as its maker. And if the maker is not the Maker of all things, there’s always room for error.

Can AI think for itself? I asked ChatGPT, “Are you sentient?” Here’s the answer it gave:

As an artificial intelligence, I do not possess consciousness or sentience. I am a computer program designed to process and generate text based on the input I receive. While I can generate responses to a wide range of questions and perform various tasks, I do not have feelings, thoughts, or experiences in the same way that humans do. I do not have the ability to perceive the world or to experience consciousness. My responses are based on the data and instructions that have been programmed into me, and my primary function is to assist users by providing information and answering questions to the best of my ability.

Our worry is not the fabled singularity, where machines become self-sustaining and can think for themselves. Our caution should be a familiar one — that we’re not putting our hope in the created. The created will fail us. It’s only a matter of time. Contingencies are infinite, and even the most intelligent AI is still artificially intelligent. Hope in the imago hominis is just as perilous as hope in humanity itself. Isaiah warned those who put too much stock in the created, “When you cry out, let your collection of idols deliver you! The wind will carry them all off, a breath will take them away” (Isaiah 57:13). We who were created in the imago dei — the image of God, need only look to him for deliverance. And his enduring word provides us with an intelligence that creates out of nothing, needs no programming, and can lead us through any contingency. He isn’t the droid we’re looking for, but his is the intelligence we need.

“‘For who has understood the mind of the Lord so as to instruct him?’ But we have the mind of Christ” (1 Corinthians 2:16, ESV).