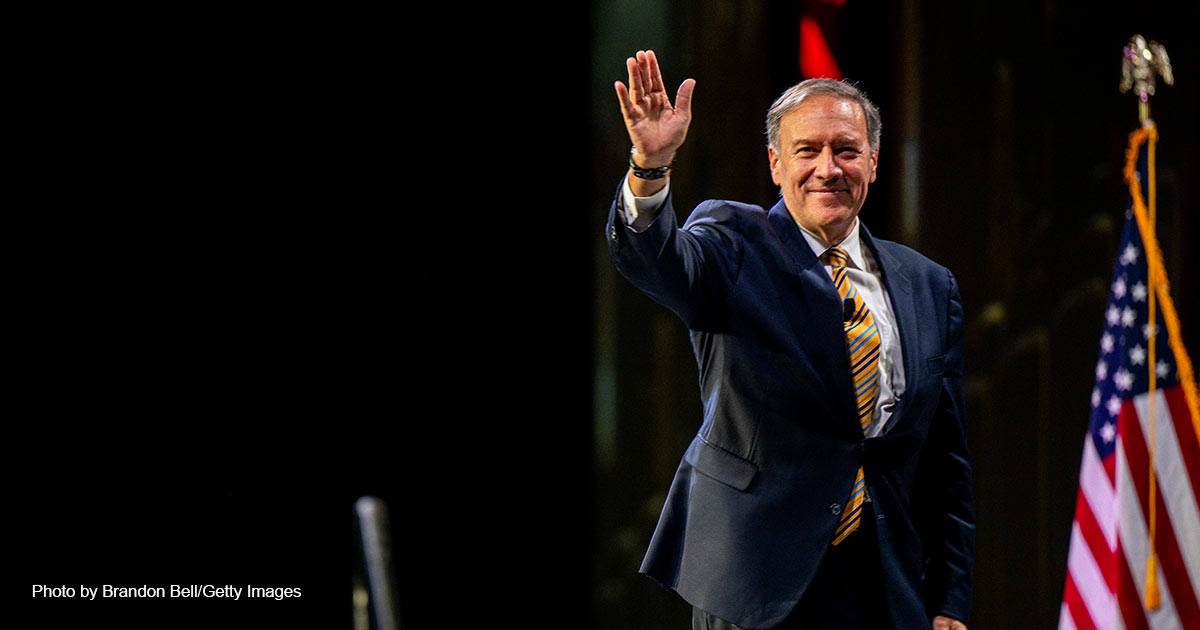 As Biden Meets with Xi, Pompeo Warns of a Much More Dangerous Threat

While the country’s attention flits between the slow drip of election results and Bali’s G20 summit, Democrats continue to bask in their softer-than-expected midterm landing. The president, who’s taken America’s five-million vote shift toward the House GOP as a mandate to change nothing, insisted after his meeting with Chinese President Xi Jinping that the divided results prove that “America is back.”

The comments came after Biden’s three-hour sit-down with the head of the Chinese Communist Party, where he managed to avoid a number of oversized elephants in the room, including COVID and the violent genocide of China’s Uyghurs. In the White House’s readout of the two leaders’ conversation, the president explained that he decided to address “human rights more broadly,” refusing to hold Xi’s feet to the fire in a global crisis that’s extinguishing generations of innocent people.

Family Research Council’s Arielle Del Turco, assistant director of FRC’s Center for Religious Liberty, was frustrated — but not surprised — that Biden chose to squander the rare face-to-face with Xi on topics like global warming. “President Biden routinely talks about wanting to ‘cooperate’ with China on climate change and a number of other issues — this is a mistake. Foreign governments that commitment genocides against their own people tend to not treat other countries well either. It’s foolish to expect cooperation from a regime that’s putting a 90-year-old cardinal on trial in Hong Kong for supporting pro-democracy protestors. This is how insecure, abusive, and power-hungry regimes act. Why should Biden want to partner with the CCP on anything? It’s disheartening when U.S. officials put an abstract and long-term climate agenda ahead of the innocent victims of the CCP who are suffering and desperate for help right now.”

Instead, Biden was all smiles and photo ops, insisting America stands ready to work with China, despite the threat it poses to his nation back home. Former Secretary of State Mike Pompeo, at an FRC banquet late last week, lamented the Democrats’ change in priorities as at least a million Muslims waste away in concentration camps. “The Chinese Communist Party is the only external force that can change the way we live,” Pompeo insisted. “It’s the most atheist nation in the world [with] 1.4 billion people, and they want total control. …[T]he ability for anyone to practice their faith is just about nil under the leadership of Xi Jinping, and we recognize this challenge and had begun to confront it. And the Biden administration doesn’t seem like they have the temerity to actually confront it.”

But interestingly enough, the former CIA director thinks America has bigger things to worry about than China’s tyrants. “I get asked all the time: who poses the most risk? Is it Xi Jinping? I spent a lot of time with Chairman Kim in North Korea. It’s neither of them. It’s not Vladimir Putin, [even though he’s] a bad guy,” he told the crowd. “The greatest threat to the United States is Randi Weingarten, the head of the teachers’ unions. What they are trying to do to the next generation of children,” he shook his head, “to walk away from the greatness of America, to teach our kids that there are more than two genders, to teach our kids that we are racist nation. If we lose a generation that doesn’t understand our founding, our Judeo-Christian heritage, the 74th Secretary of State or the 75th Secretary of State won’t stand a chance.”

Like most conservatives, Pompeo said he was “certainly disappointed” by last Tuesday’s outcomes, but one area he believes voters got right was the upending of American school boards. “It was great to watch this election, where parents were demanding that schools do the things that schools should do.” In a debate as local as education, Pompeo agreed, “We’re going to have to win this from the ground up. But President Biden is doing his best to empower these national forces, these progressive forces to drive this ideology into not only our K-12 schools, but our universities. And I fear that they are trying to undo the national level work that we had done to create choice for kids … and to empower parents.” So, if you were to ask about the most dangerous threats facing America, “I might put that ahead of even the other two [China and North Korea] in terms of actual risk to our republic.”

As if on cue, Democrats continued to prove Pompeo right — first with Rep. Eric Swalwell’s (D-Calif.) shocking post that parents’ involvement in education is “so stupid,” then with the NEA’s controversial Saturday tweet. “Educators love their students and know better than anyone what they need to learn and thrive,” the country’s largest teachers’ union claimed to the disgust of moms and dads everywhere.

Some fired back that parents will always know better; others thanked the NEA for keeping the fires of the grassroots movement burning. Libs of Tik Tok jokingly asked if this was “an ad for school choice?”

“First they locked our kids out of school, and now they’re trying to lock up parents,” Pompeo said with a nod to the DOJ’s “domestic terrorist” label. “It’s really quite stunning to see this happen in our country. But I must say,” he went on, “be encouraged. The Lord is at work.”

The former secretary told a story about traveling the country these last 16 months and running into all kinds of people who were getting involved locally. He met a biker in Tennessee in the full leather jacket, bandana, tough-guy gear, who walked up to him “and he says, ‘I love you.’ And I said, ‘I love you too.’ And he says, ‘I’m running for school board.’ And I said, ‘That’s fabulous…’ He said, ‘Yeah, I don’t even know where the school board meetings are held, but I’m going to win.’ And he did win. It was about his grandkids. [They were] teaching his grandkids things he didn’t want his grandkids being taught. And I think that’s happening all across the country.”

So, Pompeo urged, “do those things in your community and in your schools.” “Coach the kids soccer team. Make the chili dinner at your church. …When we get those things right, we will begin to build the foundations that will allow us to get good people who will step forward and serve — serve on city councils, serve on school boards, run for Congress. … And we’ll do the hard work to tell the story that I am confident the American people will understand is the right direction for our nation.”