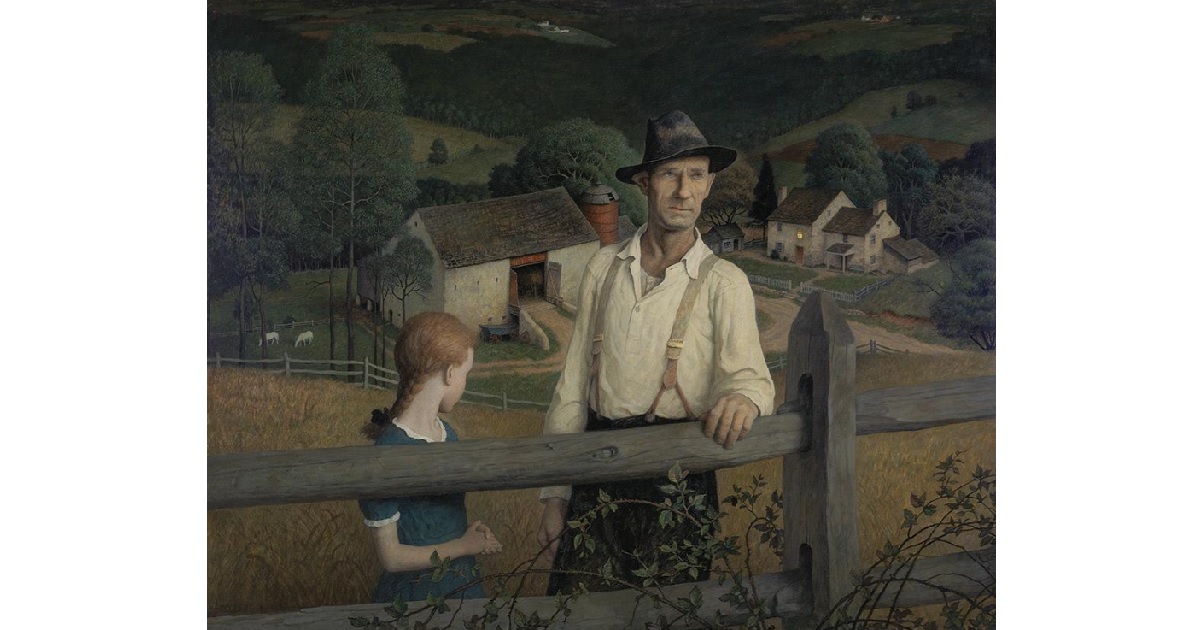 Beauty Will Save the World (Part 3): How N.C. Wyeth’s ‘Nightfall’ Reveals a Father’s Innate Role in the Family

Fyodor Dostoevsky, the great Russian writer, famously observed that “Beauty will save the world.” In this spirit, this series focuses on great works of art and how they reveal new layers of meaning to the inexhaustibly rich themes of life and human dignity, marriage and family, and religious freedom. Read part one on Mary Cassatt’s ‘The Boating Party’ and part two on Rembrandt’s ‘The Jewish Bride.’

N.C. Wyeth, the great American illustrator, vowed early in his career only to paint from experience. His iconic images of cowboys and outlaws, knights in armor and adventurers at sea, throb with the energy he felt personally working on cattle ranches, sailing in Maine, and living a generally rich, robust, classically manly life.

In the tempera painting, “Nightfall,” Wyeth draws his attention away from the exotic worlds of wranglers and pirates to a more universal theme. Painted in the unusual medium that his son, Andrew, would later use for his famously poignant portrayals of rural life, “Nightfall” depicts a father gazing across the border of his family’s land into the night’s descending darkness. Beside him, a daughter with clasped hands looks backwards toward a light glowing in the window of a simple farmhouse. The young daughter stands beside her father as if planted in the earth, turning toward the light of home as a flower turns to the sun.

In this image, which Wyeth told his own daughter he enjoyed painting more than any he could remember, the artist infuses a lifetime of felt experience into a painting about manhood, family, and freedom. As a father of five extraordinary children and a man who lived most of his adult life on the 18 acres of farmland he bought and cultivated in Chadds Ford, Pennsylvania, Wyeth knew intimately the joys and anxieties of life as a provider.

The farmer rests his work-worn hand on a rail of wooden fence, his family’s feeble but sacred defense against the thorns and threats of the world, which can be seen mounting a slow attack at the bottom of the image. The care on the figure’s face reflects to the viewer the danger he perceives in the darkness. Painted during the final year of the second World War, Wyeth’s image can be interpreted as an icon of the American dream resolutely facing the menace of foreign aggression.

The true relevance of the painting, however, is the tribute it pays to the rights of the family. Our modern political activists might see in this image a family that must be provided for, a family in need of protection against the uncertainties of country life, perhaps even protection from themselves and their own provincial prejudices. They would fail to perceive the representation of their own ideology in the looming darkness that befalls the valley. Storms, famine, drought, and frost may certainly visit the family, as God and nature allow, but the true danger is not adversity but usurpation. The uprooting of the ordained hierarchy may momentarily preserve the well-being of its members, but not without severing them from their source and strength.

The family is indeed needful, but God has provided a protector. The father’s task is formidable, but it is dignifying. It is a call to heroism. Any interference in the constitution and mechanics of the family would rob it of its organic strength. Only by respecting the father’s duty to direct and protect his family, will we see the home continue to flourish.

Along with his reverence for fatherhood, Wyeth imbues the picture with an acknowledgment of the sacred right to property. The painting reminds us that God has given us the earth with the command to fill and subdue it. There is great beauty in the unsoiled purity of virgin forests and natural wilderness, but there’s a deeper, more human glory in the fruits of a land claimed and cultivated. As Antoine de Saint-Exupéry’s fox explained to the Little Prince, “It’s the time you spent on your rose that makes your rose so important... People have forgotten this truth, but you mustn’t forget it. You become responsible forever for what you’ve tamed. You’re responsible for your rose.”

Wyeth reportedly painted the figure of the daughter from imagination, without any model or reference. This rose of a girl, with her green dress and red hair, symbolizes the soul of the family with all its beauty and delicacy. She may be susceptible to any number of risks, but she is at home. She is firmly planted under the care of her father.

May the family fence hold strong. May the hearth continue to warm and illuminate throughout the advancing night.

John Sumereau graduated with a bachelor’s degree in Art from the Penn State School of Arts and Architecture in 2013. John lives in Winchester, Virginia with his wife and three children, whom he currently supports by working as an ultrasound tech at a local hospital. His artwork can be seen on the John Sumereau Art Facebook page.