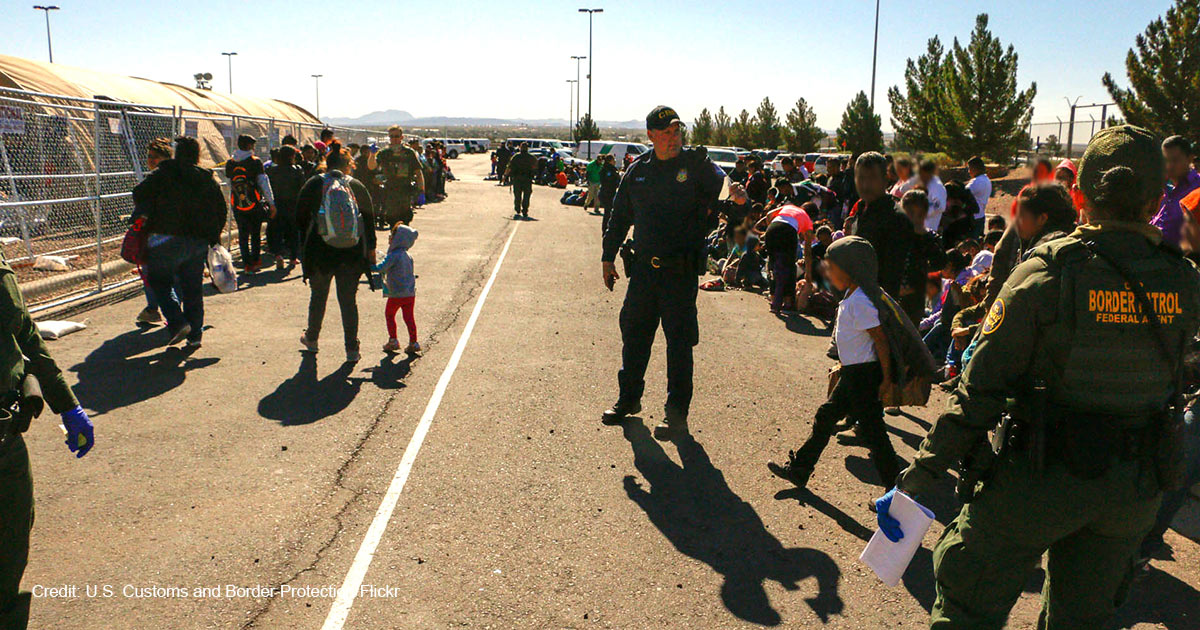 Migrants crossing the border in El Paso, Texas Sunday night lined up single-file “as far as the eye can see” for processing by U.S. border agents. A veteran immigration reporter called the migrant caravan of more than 1,500 people “the biggest single group we have ever seen.” At the same time, multiple caravans of 500, 600, and 700 migrants crossed the border at Eagle Pass, Texas. These vast migrant waves come only days before the main policy enabling the U.S. government to quickly deport migrants back to their home countries is set to expire on December 21.

Border patrol agents in the El Paso Sector (Western Texas and New Mexico) “experienced a major surge in illegal crossings, with a 3-day average of 2,460 daily encounters, primarily through the downtown area of El Paso,” said sector chief Peter Jacquez. That comes out to a three-day total of 7,380 — with almost 15,000 migrant encounters in the past week, according to a city-run dashboard.

On Sunday, more than 5,100 migrants were detained at the U.S. Border Patrol Central Processing Center in El Paso, a facility designed to temporarily hold 3,500 people — 46% over its maximum capacity. U.S. Customs and Border Protection (CBP) continued releasing migrants as quickly as they could be processed — they released 1,744 migrants in El Paso on Saturday and Sunday — but more kept arriving even faster than they could be processed. As to those released, they filled every bed at NGO-run shelters, until CBP finally had to simply release 611 migrants into the streets. In a single day, migrants released by CBP in El Paso nearly tripled the city’s homeless population of 809, according to a local nonprofit.

If this weekend’s “flood” of border crossers — that’s The New York Times’s word, not mine — was a particularly high tide in between two “ebbs,” it might be more manageable. But border crossings were already elevated, and they are likely to remain that way. More than 200,000 migrants crossed the border with Mexico in October, the most of any October on record, with an estimated 64,000 additional got-aways. In fiscal year 2022, Border Patrol apprehended 2.2 million migrants. In fiscal year 2023, which began in October, CBP has apprehended at least 485,000 migrants.

The crisis at the southern border is about to grow much worse.

On December 21, border agents will lose the only tool in their belt for deterring Central and South American migrants from heading for the border: Title 42. That pandemic-era measure allowed CBP to rapidly deport migrants who did not qualify for asylum on public health grounds. The Trump administration combined Title 42 with the Remain in Mexico policy to slow the border flood down to a trickle. But the Biden administration moved immediately to end the Remain in Mexico policy, and it tried to shutter Title 42, too.

Title 42 was always more of a sew-on patch — it wasn’t pretty, but it worked. The public health rationale for deporting migrants was temporary and has long since become obsolete. But the Trump administration adopted it in a desperate attempt to secure the southern border despite Congress’s refusal to provide a more permanent solution. Once in place, Title 42 persisted because there wasn’t any other option.

After two years, the Biden administration has yet to devise other options to meet the multiple security and humanitarian aspects of the crisis. When they first tried to ditch Title 42, a judge ordered them to preserve it. Now, another judge has ordered them to end it and gave them several weeks to figure out another solution — but they still haven’t done so. “We are working through what the procedures will be,” said National Security Advisor Jake Sullivan at a Wednesday press conference.

How can the Biden administration not know already?

The Biden administration had to know the southern border would be an important policy area since day one. President Biden immediately acted to terminate former President Trump’s border policies, although Title 42 held on by court order. Early on, he formed a task force, spearheaded by Vice President Kamala Harris, to address the issue. Border state governors have loudly demanded a federal response for two years, and have at times taken matters into their own hands. Now we learn that, nearly two years in, the Biden administration doesn’t even have a policy it wants to implement as a replacement for Trump’s.

This is the wrong way to decide policy, even by the Left’s own standards. A political scientist would advise the president to first consider the relative costs and benefits of several policies and then adopt the best one. The modern discipline of political science was invented by liberal academics in the 1960s (think LBJ’s “Great Society”), and it still leans heavily to the Left numerically, financially, and even statistically. Some conservatives courageously offer to battle in this field, but it’s by no means a conservative discipline. Even by the standards of this Left-liberal-dominated discipline, which presumably feeds experts into the ranks of the Biden administration, the Biden administration’s failure to consider possible replacement policies before ditching Trump’s policy makes no sense.

Experts estimate that up to 18,000 migrants per day could cross the border after Title 42 is dissolved, no longer deterred by the substantial threat of deportation. Eighteen thousand migrants per day comes out to 6.57 million migrants (1% of the population of Central and South America combined!) per year. Immigration and Customs Enforcement (ICE) is already battening down the hatches. “We are being told to abandon detention of anyone without a Class A felony like murder in preparation for border flights,” said one ICE officer on the East Coast. In other words, ICE has ordered its officials to not arrest criminals because then there would be no detention space to hold all the migrants they expect.

Progressives often criticize border security advocates for not caring about the plight of migrants crossing the southern border. But in reality, incentivizing migrants to make the journey by bolstering their hopes of successfully entering the U.S. is the least humanitarian policy. Many migrants expend or lose their life savings on the journey, only to be turned away. Even if successful, potential asylum-seekers face hazards on the road from privation, exposure, and violence. Some of the migrants who crossed last week in El Paso had been kidnapped on a bus and held against their will in inhumane conditions. “We were 1,500 people sleeping in a house,” said one Peruvian woman whose passport and phone were stolen.

Migrants’ problems don’t end when they reach the U.S. Instead of entering the U.S. in a vehicle across a bridge, most are forced to travel on foot, wading across a river in all sorts of conditions. Those who entered El Paso this weekend forded the Rio Grande with air temperatures in the low 40s or 30s. Once across — and soaking wet — they queued on the concrete bank and simply stood there until border agents could process them. Some migrants waited so long without moving that they lit fires to warm them on the frigid evening. Meanwhile, the oversaturated processing facility was releasing migrants who crossed days earlier back out onto the city streets to make room for more. Is this how people enter a civilized country?

Those who are willing to sacrifice the security of the border in order to treat migrants humanely have achieved everything they want — except humane conditions for migrants.

Not even former border crossers believe the process is safe. A Cuban immigrant, who crossed the Texas border 12 years ago, came to see whether he could bring his 80-year-old mother across. He concluded that she wouldn’t survive the river and the line in the cold. “I saw it on TV, but I didn’t think it would really be like this,” he told a reporter.

Most people who visit the border are shocked at the unmitigated disaster unfolding there in real time — and in the United States, of all places. Yet last week when President Biden was only minutes away, he couldn’t be bothered to visit. In neglecting to develop an operable border policy, it seems his administration is taking its lead from their chief.