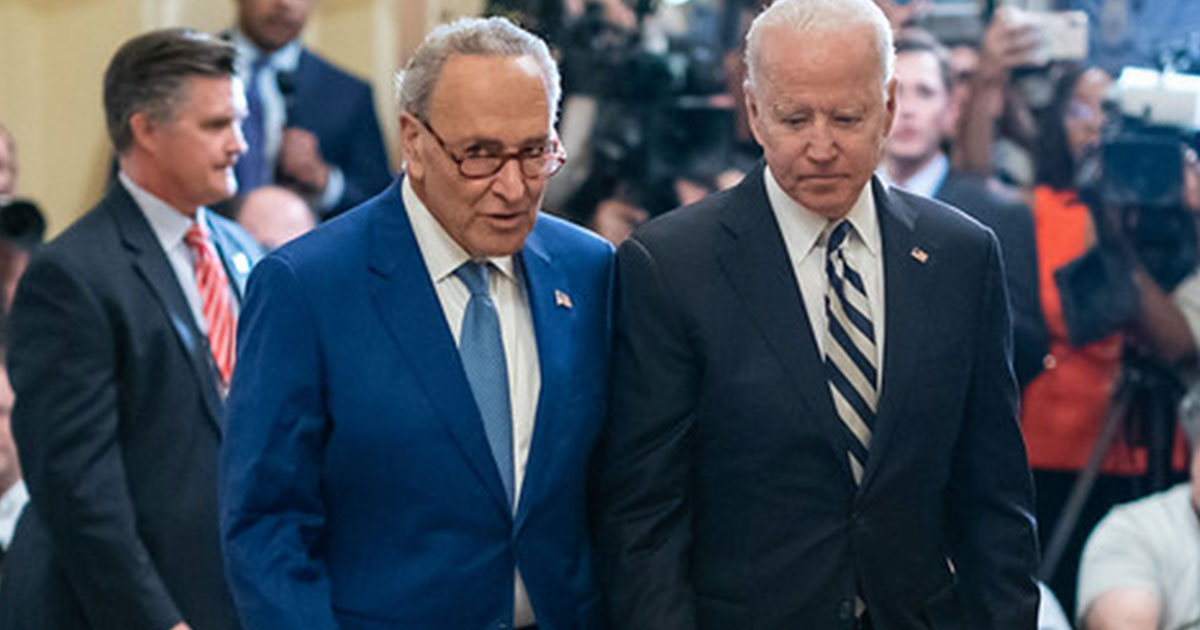 Senate Democrats just donned masks, grabbed a few crowbars, and ambushed the American economy in a back alley — metaphorically speaking. After Senator Joe Manchin (D-W.Va.) finally indicated last week how small a version of the Build Back Better bill he would support, Senate Majority Leader Chuck Schumer (D-N.Y.) hurried to cash that check before the deal fell apart, scheduling a vote-a-rama on Saturday and a final vote on Sunday.

Under reconciliation, the falsely named Inflation Reduction Act needed a simple majority to pass, aiding its chances in the evenly divided Senate. The bill passed along party lines, with Vice President Kamala Harris casting the deciding vote — securing the slimmest possible margin of victory. So desperate were Democratic bean-counters to ensure the bill’s immediate success that there were unofficial reports of Democratic senators unofficially avoiding the regular COVID testing they had insisted on, because a single absence would have delayed the bill.

All for a bill that would punch the already-faltering U.S. economy in the gut. “It’s a special kind of stupid to raise taxes during both a recession and inflation,” said Senator John Kennedy (R-La.). That’s exactly what the bill does, first by raising taxes on American businesses and next by dramatically expanding the Internal Revenue Service (IRS). The businesses that would be hardest hit are American manufacturers, most particularly oil, coal, and gas producers.

Meanwhile, “the biggest beneficiaries of this bill,” said financial economist Stephen Moore on “Washington Watch with Tony Perkins,” are the “climate change industrial complex, which is now practically a $1 trillion industry that feeds off taxpayer dollars.”

The second biggest losers are everyday Americans. “Their promise that they would only tax people who made less than $400,000,” protested Moore, is “a big, fat lie. Even the government’s own numbers say that the people making less than $200,000 will pay about $17 billion more taxes under this bill. … If I sound angry, I am. Because this bill is so contrary to America’s economic self-interest. You don’t raise taxes during a recession.”

In addition to the business taxes, which will be promptly passed on to consumers, the bill proposes to spend $40 billion on hiring 87,000 new IRS agents, essentially doubling the agency’s staff. “Democrats want to make the IRS larger than the Pentagon, the State Department, the FBI, and the Border Patrol combined,” complained Senator Ted Cruz (R-Texas). “This is just such a warped sense of priorities about what matters to the American people,” complained Moore. “Our army just reported they don’t have enough soldiers. … We need to hire at least 10,000 more border agents. But instead, their priority is to hire 80,000 new IRS agents.”

Having trapped themselves into expanding the most widely-hated federal agency, Democrats have resorted to the most ridiculous excuses to defend their actions. Senator Ben Cardin (D-Md.) insisted, these agents were to provide “better service,” because that’s the problem on the top of all Americans’ minds.

According to the bill’s own calculations, the purpose of all these new IRS agents is to generate $124 billion in revenue through enhanced “enforcement” capabilities. In other words, it will conduct more audits with the aim of making people pay more taxes. In Biden’s economy, there aren’t enough billionaires to target, so these financial hounds will eventually get sicced on ordinary, taxpaying Americans.

But Moore foresees an even more sinister application. “They’re going to weaponize the IRS, just like they’ve weaponized the Justice Department and the FBI to go after conservatives and Republicans,” he warned. These are not idle musings; Moore remembers the way the IRS was weaponized against conservatives during the last Democratic administration.

It seems most Americans also remember not to trust Democratic promises. “Only like 15% of Americans believe this bill will reduce inflation. Most Americans are right,” said Moore. It’s laughable that Democrats have named the bill, the Inflation Reduction Act. FRC President Tony Perkins joked, “I’m actually a little bit surprised they didn’t just call it the World Peace Act to really get the public behind it.” Moore agreed, “I want to say this loud and clear. This is going to make inflation worse.” In fact, he added, “this is going to make inflation much worse because they’re raising taxes on American companies. … Everybody knows, when you do that, what are they going to do? They’re going to raise their prices.”

Those prices keep outpacing wages. Senator John Barrasso (R-Wyo.) said, “If you talk to families, they are having a harder and harder time keeping up because, even if they’re working, even if they got a bit of a raise, the raise has not kept up with the cost of inflation. And families in this country, in spite of what the president may have said, are falling further and further behind.”

“It’s tough times for America right now,” agreed Moore. But “it’s not a tough time in Washington, D.C.” Yet, the Democrats don’t seem to believe they have a problem. “Joe Biden — if you listen to him talk — he acts like he’s some kind of fiscal savior, like he’s bringing down the deficit,” said Moore. “That’s like saying Al Capone wasn’t a criminal.” After pummeling the economy for the past 18 months, both bringing on historic inflation and contracting the economy into a recession, the Democrats want to be praised for their latest shakedown.

The bottom line is that Biden’s staff “hate business,” insisted Moore. “Almost nobody in the Biden administration has any business experience. This is an anti-business administration. … They think everybody’s just going to work for the government or for these green energy companies.”

According to Moore, the bill is nearly as evil as the human heart. “An absolutely dreadful piece of legislation,” he called it, “a dangerous bill.” He summarized, “There’s nothing good in this bill if you’re a conservative, a free market person, if you want America to be producing our energy, if you don’t want the IRS harassing you.” If I was the American economy, the last thing I’d want to meet in a back alley is a group of government officials promising they have a plan to “help.”