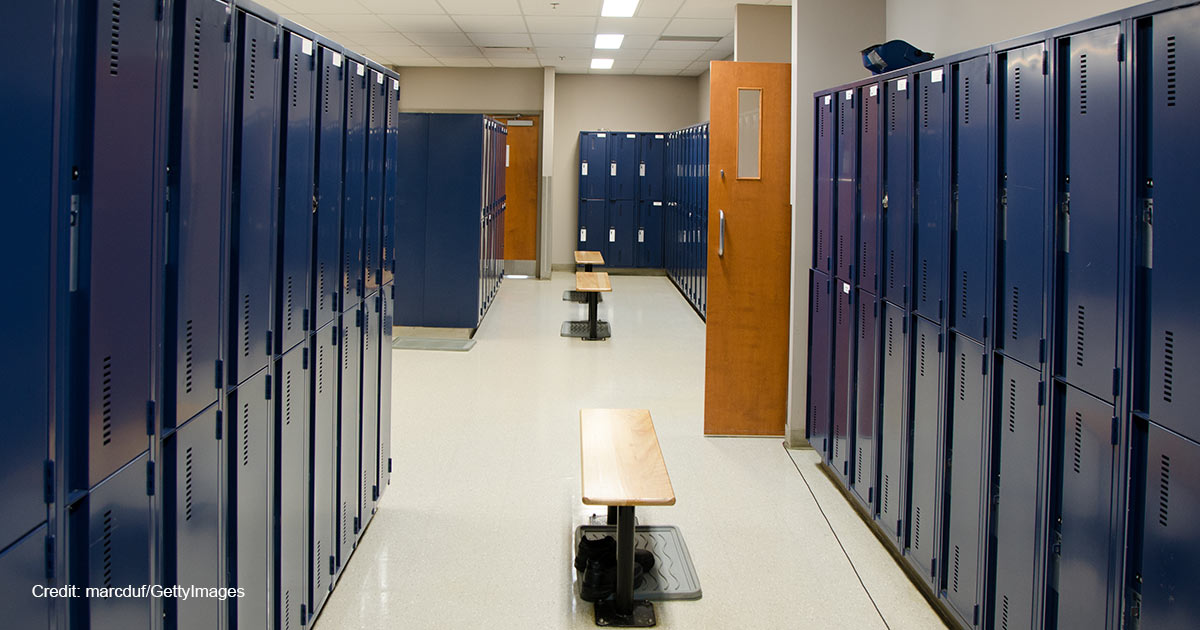 A Vermont high school announced last week that the girls’ volleyball team was barred from the locker room until further notice. The whole volleyball team — except, apparently, for the biological male who plays on the girl’s team. The closure was not due to a health hazard, routine maintenance, or legitimate reason; rather, the school kicked the girls out of the girl’s locker room for asking their male teammate to leave while they changed. “We do not make this decision lightly, but we believe it is the right decision at this time,” wrote the co-principals and athletic director in an email to parents.

When parents complained, school officials told them that Vermont law requires schools to allow students to use locker rooms according with their gender identity. However, as the mother of one athlete protested, “The law gives them room to protect all, and they did not.” Rather, the school administrators are investigating the female volleyball players for harassment of their biologically male teammate.

The school’s decision to prefer the one student who identifies as transgender over the rest of the team made no logistical sense, one athlete complained. “They want all the girls who feel uncomfortable — so pretty much 10 girls — to get changed in a single stall bathroom, which would take over 30 minutes. Where if one person got changed separately, it would take a minute, like no extra time.” Yet school officials told families there was “plenty of space where students who feel uncomfortable with the laws may change in privacy.” True, as long they’re willing to be late for practice.

After spilling out into the hallway, the controversy has swept through the entire school. “It’s a huge thing. Everyone’s asking, ‘So, why aren’t you allowed in the locker room?’” one volleyball player said.

Whatever smokescreens school administrators create, the answer to that question is simple; the girls asked a boy, “Please don’t come in here, we’re still changing,” and he refused. In fact, he wasn’t even entering to change. According to the mother mentioned above, the biological male “was not changing and sat in the back and watched girls getting changed. That made girls feel uncomfortable, made girls feel violated and not protected.” But the dispute only started after he “made an inappropriate comment.”

Eventually the controversy spilled out onto the local news when one of the female athletes agreed to an interview, with her mother’s permission.

When the biological male who identifies as female was shown the news clip, he allegedly exclaimed, “I’m going to ******* kill someone,” and “I ******* hate” the interviewed student. She reported the incident to the principal, and the police were called. The next day, school administrators informed parents that there were “no credible threats affecting the district or high school.” The same day, the county sheriff said the “incident is currently under investigation.” Evidently, school administrators consider a violent threat under active police investigation a less serious offense than girls demanding privacy in their locker room.

“Have we lost all common sense?” protested one father. “We’ve been pounded on the last two years to trust the science.” The science on human sexuality is obvious, incontrovertible, and established by thousands of years of experience. In fact, they teach this science in public schools. A good teacher’s mission is accomplished when her students have so mastered the content that they can successfully re-apply it other contexts, all on their own. This is one lesson on which Randolph High’s girls’ volleyball team needs no remediation. They understand the inherent differences between men and women, and that these differences matter. “It’s a dude,” said one member of the team, when asked to explain why she took issue with his presence. “He was born a boy.” ‘Nuff said.

Then the student added a twist that might surprise readers, “I don’t care if he’s on my team, he can join any team, I don’t care. But when I’m undressing and there’s a male in the girls’ locker room or in the bathroom with me, I feel very uncomfortable.” That’s not the argument you typically hear (likely because it tries to reconcile incompatible positions).

But it does expose the falsehood of the Left’s insistence that women’s sports is a culture war issue created by Republicans. This isn’t MAGA country, nor does Governor Ron DeSantis (R-Fla.) review the classroom curriculum. This high school is in progressive Vermont, which proudly re-elects Bernie Sanders to the Senate and hasn’t voted Republican for president in 30 years. Young female athletes are also challenging transgender hegemony in neighboring Connecticut (also no Republican stronghold); after their federal lawsuit was dismissed as moot, they have refiled their case in the state court system.

If the objections to men who identify as women sharing women’s locker rooms do not arise from partisan malice and transphobia, what is the source? A desire to protect women from physical and emotional violation, and a regard for decency and modesty in human relations. These considerations — byproducts of Christianity, by the way — are still widespread, despite the corroding influences of feminism and Marxism. Protecting women was the original purpose of Title IX, which the Biden administration is attempting to totally subvert with its tortuous proposed rule.

But unelected bureaucrats cannot finally settle such an issue under a republican form of government, particularly not when it finds such vehement, grassroots opposition in communities where it expects to find the firmest support. Even high schoolers, even those raised to tolerate the transgender mania, know enough biology and basic modesty to object to changing in front a member of the opposite sex.