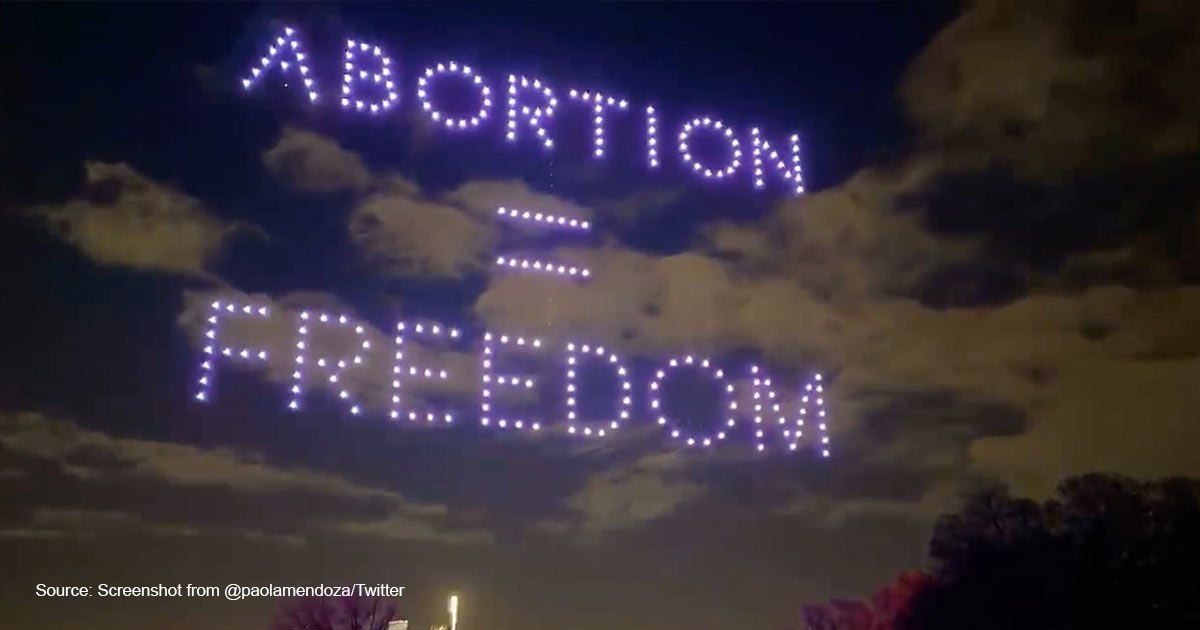 Abortion activists unfurled a creative new campaign medium in Philadelphia, in the final push before the 2022 midterm election. Dozens of tiny drones lit up the night sky, bat signal-style. Like a marching band at halftime, they spelled out the Democrats’ all-important, closing message of the election: “Protect Abortion. Our Lives, Our Bodies, Our Futures.” They explained, “Abortion = Freedom.” Activist Paola Mendoza tweeted, “Tonight in Philadelphia we reclaimed the sky with drones to share the message #AbortionIsFreedom.”

Mendoza’s message raises more questions than answers. (What does “reclaimed the sky” mean? Did they own it, and someone took it from them?) Whose life, whose body, and whose future are at stake in an abortion? Certainly the mother’s life isn’t at stake, but every abortion ends the life of an unborn baby. That unborn baby whose life is ended by abortion also possesses a body entirely distinct from his mother, although developing inside her womb. The abortion acts on the woman’s body only as a means to destroy the child inside her. Then again, by killing the baby, an abortion utterly destroys his or her future. It also damages the woman’s future by destroying her offspring, possibly causing side effects that can impact her future fertility.

Abortion activists would counter that banning abortion can ruin a woman’s future by affecting her career aspirations, that it interferes with her bodily autonomy, and could even risk her life if she pursues an illicit abortion. But this is so much feminist hogwash. It completely obscures the all-important fact that there is a baby in the womb — a separate living person — whom the government has an obligation to protect, and to whom the mother also has natural obligations. These claims only serve to highlight the inherent danger of abortion — which often claims two lives instead of one — the bodily autonomy which the baby also possesses and the cruelty of advancing one’s career by killing a child.

This builds up to the abortion activists’ most offensive and unbelievable claim of all, that “abortion = freedom.” For that to be true, the opposite claim must also be true, that motherhood equals slavery. That’s a direct affront to all mothers everywhere — and to everyone who has a mother. How lightly do these activists value human life! And how callously do they reject the natural feelings and the instinctual, nurturing ties of family. It’s also a direct affront to victims of modern-day slavery. Legal abortion is a great benefit to human traffickers, who use it to cover up the evidence of sexual abuse. For victims of human trafficking, abortion is often used as the manacles of their bondage.

One great unanswered question in the claim that “abortion = freedom” is, freedom for who? Many women who obtain abortions (a majority, in fact) experience pressure to do so, with a full two-thirds recognizing it as a mistake. That sure doesn’t sound like freedom for women. And it certainly isn’t freedom for the baby, either, whose life is ended before he or she ever gets to exercise freedom.

The other question lurking in the “abortion = freedom” formulation is, freedom for what? The answer seems to be, so that women who abort their babies can continue to pursue a self-absorbed lifestyle, unconstrained by familial ties. It also enables irresponsible sexual conduct by erasing the consequences. These immoral ends are unworthy of the name of freedom. Freedom is good when used for good. But when people use their freedom for selfish, worthless ends, what is the point? An institution devoted to exterminating human lives can never be reconciled to a portrait of virtuous freedom.

The drones also displayed a green hand signaling “stop” and a green bandana, a symbol used by Argentinian abortion activists. An American group called Rise Up 4 Abortion Rights has adopted the green symbols in opposing the Supreme Court’s Dobbs decision and other abortion restrictions. The group has organized protests outside of Justice Amy Coney Barrett’s home and obstructed public thoroughfares near the Supreme Court, in a stunt where dozens of activists and members of Congress chose to be arrested rather than disperse. While the Dobbs decision merely returned abortion policy to the people, abortion activists have kept up unrelenting pressure.

It’s appropriate, in a sense, that abortion activists chose to employ dozens of drones to take their message into the sky. Drones are not living beings, merely machines that perform according to their programming. So, unlike the marching band’s halftime performance, the display did not require dozens or hundreds of humans to unite their rhythms and intellects into one magnificent display. It just required some little robots, pre-programmed by one person, or at most several. The human-free display reflects the anti-humanism of the abortion movement, and it demonstrates the society that would result if abortion activists got their way.