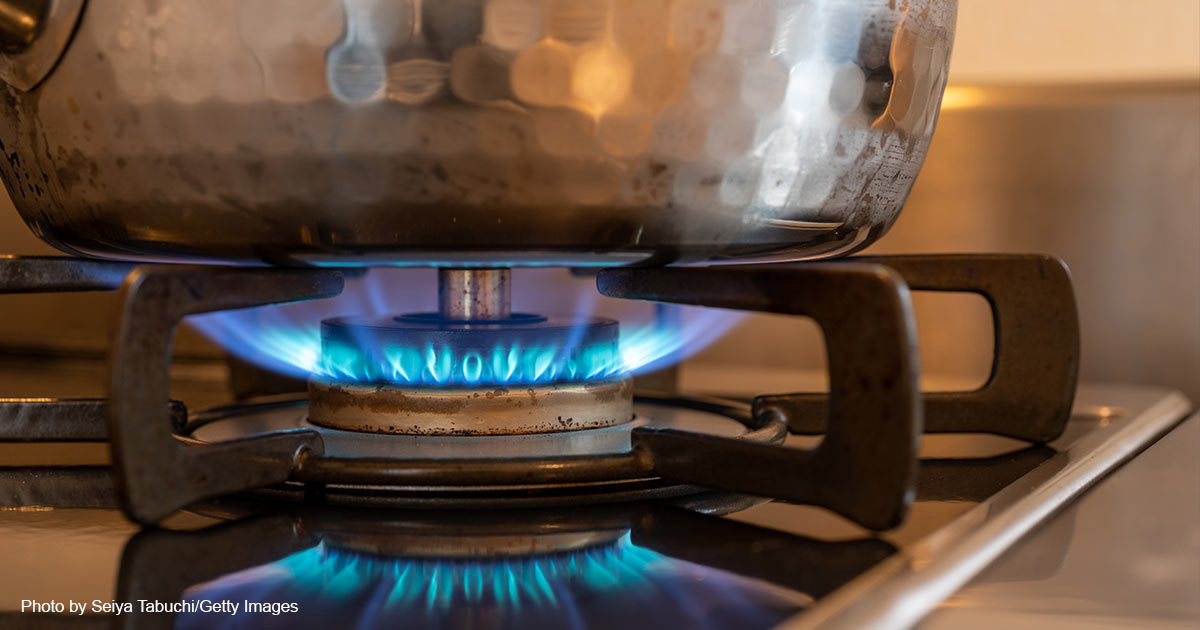 With inflation cleaning out the fridge, one Biden administration official fixed his scope on another kitchen appliance — gas stoves. “This is a hidden hazard,” U.S. Consumer Product Safety Commissioner Richard Trumka Jr. told Bloomberg News in an article published Monday.

One study suggests that emissions from gas stoves, found in approximately 40 million homes, are responsible for 12.7% of childhood asthma cases in the U.S. In a letter written last month, Senator Cory Booker (D-N.J.) and Representative Don Beyer (D-Va.) asked the commission to address the “cumulative burden” gas stoves present to “Black, Latino, and low-income households.”

Democratic appointees currently hold a 3-1 majority on the CPSC. Trumka Jr. is the most recent appointee, joining the commission in October 2021, shortly after the death of his father, Richard Trumka, Sr. who was president of the AFL-CIO labor union. The CPSC investigates the safety of thousands of products, coordinates recalls, and occasionally bans products that pose “unreasonable risks” like lead paint and asbestos.

Commissioner Trumka implied that gas stoves might be in this latter category. “Any option is on the table,” he intoned. “Products that can’t be made safe can be banned.” Naturally, with gas stoves, progressives prefer to waive the formality of safety improvements and move right on to banning them. Beginning as recently as 2019 with Berkeley, California (where else?), 50 California cities have already prohibited gas range tops for residential and commercial property, with other progressive strongholds like Seattle and New York City following suit. New York Governor Kathy Hochul (D) implied she may attempt the first statewide ban in her State of the State speech last week.

As expected, rumors that CPSC might ban gas stoves sparked a national conflagration. “I’ll NEVER give up my gas stove,” tweeted Rep. Ronny Jackson (R-Texas), who is now fundraising off the rumor. “If the maniacs in the White House come for my stove, they can pry it from my cold dead hands. COME AND TAKE IT!!” Even Democrats piled on, with Senator Joe Manchin (D-W.Va.) tweeting, “This is a recipe for disaster. The federal government has no business telling American families how to cook their dinner. I can tell you the last thing that would ever leave my house is the gas stove that we cook on.”

The news was even too much for late-night host Stephen Colbert to bear. “You can have my gas range when you pry it from my hot, sizzling hams,” he said. While granting that gas stoves might be linked to health concerns, he responded, “Counterpoint: gas stoves are also linked to delicious pan-seared scallops.” But he also pushed back on the notion that “electric stoves are so safe,” quipping, “Is it on right now? Only one way to find out. Jimmy, put a plate on there and see if it explodes in your face.”

It’s brutal and humorous, but Colbert’s satire strikes close to home. Early in marriage, one evening I pulled my wife’s delicious apple crisp out of the oven, set it on the (electric) range top, and proceeded to wash up after dinner. My mind flitted forward to sampling the warm, spiced goodness over ice cream when she came home (she was in graduate night school at the time). Suddenly, not two yards away, a deafening boom jolted me back to the present. It sounds like hyperbole, but that was the loudest sound my ears had ever heard (louder than gunfire, louder than a blown transformer). I had unwittingly set the glass baking dish on a hot eye, and my first warning was when it splintered into dozens of shards and fragments. Needless to say, the crisp was ruined, as was the dish, and even the electric eye never quite recovered. Now, I’d like to think I’m a better-than-average chef, as far as men go, but on that occasion I caused a near-disaster with a simple electric stove.

The comparison of hazards between gas and electric ranges isn’t even close. Sure, reducing indoor pollutants is a good thing. And, yes, childhood asthma can be a serious condition. But do you know what’s more serious? Death by house fire.

This reality might have informed the reassuring response on Wednesday from CPSC Chairman Alex Hoehn-Saric. “Research indicates that emissions from gas stoves can be hazardous, and the CPSC is looking for ways to reduce related indoor air quality hazards. But to be clear, I am not looking to ban gas stoves and the CPSC has no proceeding to do so,” said Hoehn-Saric. White House spokespersons followed up, “the President does not support banning gas stoves.” Well, that’s a relief.

It turns out that a less drastic solution may actually do more good than an all-out ban on gas stovetops. “Ventilation is really where this discussion should be, rather than banning one particular type of technology,” said Jill Notini, a vice president at the Association of Home Appliance Manufacturers. “We may need some behavior change, we may need [people] to turn on their hoods when cooking.” That’s a great solution for those with cooktop hoods.

But here another personal anecdote may shed some light on the range-top health concerns, particularly the complaint that the health impacts of improper interior ventilation disproportionately affect low-income and minority children. My wife and I recently searched for — and bought — a starter house in a majority-minority county with many older homes. Based upon the dozens of houses we visited, kitchen fans are certainly the exception, not the rule. It could be that the 12.7% of childhood asthma cases is due, not to gas stovetops per se, but to an accompanying lack of proper ventilation. If this is true, a gas stove ban would not actually solve the problem, whereas a more proportionate response of installing adequate ventilation would. “Banning one type of a cooking appliance is not going to address the concerns about overall indoor air quality,” said Notini.

The nonsense doesn’t end there. One unintended side effect of banning gas stoves is the disproportionate impact on certain types of cooking, particularly ethnic cooking and fine dining. Indian roti, Chinese stir fry (cooked in a round-bottomed wok), and various Latin cuisines all require open flame to prepare properly and imbue with the traditional flavors; electric stoves simply don’t make the cut. As to fine dining, gas stoves allow for better temperature control, faster cooking, and better flavor; professional chefs swear by gas stoves so completely that the California Restaurant Association is fighting the gas heating bans in court.

The Biden administration has a real knack for launching trial balloons filled with lead. Fortunately, the foolish notion of banning gas stoves was buried in a shallow grave of scorn before it ever left the ground — much like the Ministry of Truth. If an idea matures far enough, it must be dismantled in court, which takes much longer and enables the policy to mischief in the interim — the military vaccine mandate, for example. Playing whack-a-mole with the Left’s endless stream of horrible policy proposals is a wearying, endless, often thankless task. Yet there are some brave statesmen and women who pick up the gauntlet and remain vigilant defenders of freedom during their time in D.C. If no one instantly criticized this rumor until it gained legs, just how far might this bad idea have run?

Progressive hatred of gas stoves is not ultimately about safety. As National Review’s Charlie Cooke points out, “First, the impetus was climate change, then it was health, and, if these fail, it will become something else — the perils of living in the same house as plastic knobs, perhaps.” If progressives really believed in these rationales, they would reach the logical conclusion of their premises — that cooking itself is the problem. All cooking requires heating food to a temperature sufficient to chemically transform it, a process with inherent risk. And, of all the heat sources throughout history, natural gas stoves emit far less pollution (not to mention carbon dioxide) than most. An open campfire that burns wood creates far more dangerous byproducts.

Cooke continues, “But really, these are just pretexts. The true purpose of the effort is to advance a cause in the hope of feeling fulfilled.” But empty folly offers little hope of fulfillment. “Desire without knowledge is not good, and whoever makes haste with his feet misses his way” (Proverbs 19:2). Progressives faddishly determined that gas stoves needed to be eliminated and now striving retroactively to discover a persuasive justification. Instead of regulating a non-existent problem, policymakers should correctly diagnose a problem and then act.

There is a deeper reason for the palpable unfulfillment felt by many on the Left: unbelief. Only God is weighty enough to fill up and satisfy the consuming emptiness inside us. The one who denies God folds his hands and eats his own flesh (Ecclesiastes 4:5). But those who believe God and trust in him receive a supernatural, unexplainable peace that fills them up and makes them content, even in the most adverse circumstances. “Better is a handful of quietness than two hands full of toil and a striving after wind” (Ecclesiastes 4:6).

It’s possible to find deep satisfaction in righting wrongs in this world, in looking after the health and safety of people made in God’s image. But if small, temporal victories are all we aim for, our immortal souls will long for something more. Real satisfaction, even in regulating marginal pollutants, only becomes possible when we find a deeper and more substantive fulfillment in God himself.