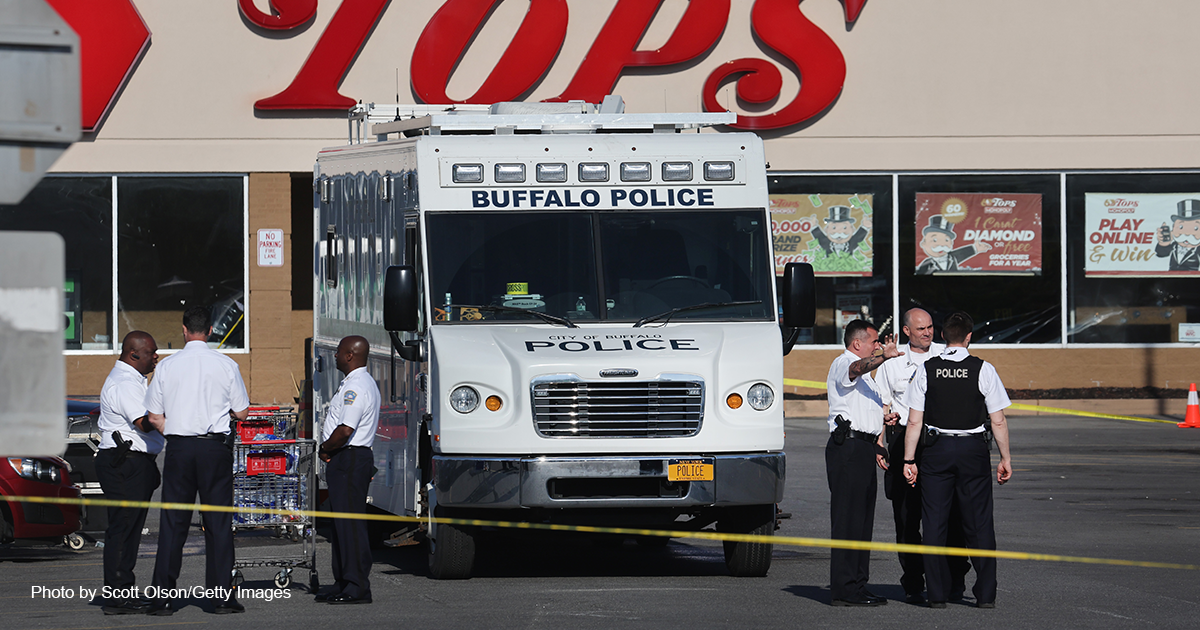 Holding Fast to Hope amid Heartache

Erie County Sheriff John Garcia called the racist shooting in Buffalo “an act of pure evil.” The president himself visited the crime scene on Tuesday and declared, “Evil will not win. I promise you hate will not prevail and white supremacy will not have the last word.” When evil so palpable and grotesque confronts us, it jars us out of our daily routines and forces us to reckon with its seriousness. Southern Seminary President Albert Mohler said the extent of evil involved in the shooting “staggers our imagination, but it’s real.” So how do we handle it?

A biblical worldview helps us understand “this kind of act doesn’t just feel evil. It doesn’t just look evil,” said Mohler. “There’s an objectively real universe with objective truth in which this kind of attack is just horrifyingly and unquestionably evil.” Of course, non-Christians can recognize the horrible evil of mass murder, too, but they lack a solid foundation on which to base that conclusion.

Mohler defined evil as “rebellion against God,” which God’s Word convicts everyone of doing. Denying this truth is itself an act of rebellion. “If we say we have not sinned, we make him a liar, and his word is not in us” (1 John 1:10). We do not “love the Lord our God with all our heart and with all our soul and with all our mind: (Matthew 22:37) or “do all to the glory of God” (1 Corinthians 10:31). Everyone has become corrupt, even if not everyone is always as evil as they possibly could be. For our offenses of thought, word, and deed against the infinitely holy, good, and righteous God, he would be just to destroy us.

But in his mercy and love, God has provided a way of escape from this judgment. He poured out his wrath against sin on his Son Jesus Christ, “who knew no sin” in himself (2 Corinthians 5:21). For those who believe and trust in Jesus Christ, God washes away their sin, gives them a new heart, and declares them justified. That’s not to say that they will never again sin; rather, instead of continuing to rebel against God, Christians “bear fruit in keeping with repentance” (Matthew 3:8).

Sadly, many people have continued in rebellion against God, and so Paul says, “God gave them up...” to the enslaving power of their own sin (Romans 1:24,26,28). Mohler described this group as “those who give themselves to sin” — mass murderers, for instance. God has prohibited murder since Cain and Abel (Genesis 4:7) because of each person’s inherent dignity as a bearer of God’s image (Genesis 9:6). Few sins are as violent or as shocking as murder, yet God has saved even murderers, like Moses, David, and Paul.

Given this biblical foundation (the gospel), how should Christians respond to mass shootings, or other terrible acts of evil that rock a community? First and foremost, Christians can “weep with those who weep” (Romans 12:15) and lament the evil deed and its consequences. And we can be grateful for God’s “common grace” that restrains human evil. As Mohler said, “I don’t know of an American who is not grieving with the people in Buffalo.”

Mohler criticized those who oversimplify policy problems and blame racism for everything. “If something means everything, it means nothing,” he said. If someone throws about wild accusations of racism, he advised Christians, “press the argument” and challenge the person to show where the racism is, because “a lot of people who make those charges aren’t about to get into that argument.” America has made great strides toward racial conciliation since 1965 or 1865, but Mohler said humility should teach us “we seem to advance here and to retreat there.” Even racism “will not be ended” by political action, Mohler warned.

Thus, when President Biden promised to defeat hate, “the president was making a declaration there he can’t deliver on,” Mohler continued. “There will be a day of judgment in which God will punish all evildoers and will punish all sin. And yes, sin will not have the last word... [but] that’s not what the president meant.” It’s nothing against Biden, personally. He just isn’t God. We cannot have such confidence “in any politician of any party,” Mohler insisted.

This is comforting, frankly. Who do you believe is more capable of putting an end to evil? President Joe Biden, or the almighty Creator of the universe, who has a perfect track record of faithfulness to his promises, and who said he “will by no means clear the guilty” (Exodus 34:7)? There’s no comparison! A “biblical worldview is the only satisfying answer,” Mohler said.

This is comforting for Christians. Those living in rebellion against God, who have rejected Christ’s saving sacrifice, have no hope of escaping God’s judgment. But after dying for our sins, Christ Jesus rose from the grave, breaking the power of sin in death. His resurrection gives us hope that we, too, will receive eternal life when he returns (1 Corinthians 15:23). This hope isn’t wishful thinking; its rock-solid foundation is God’s faithfulness to his promises. Whether we die peacefully in our beds or violently in a mass shooting — or mourn with the loved ones of those who do — as Christians our hope is that “we will always be with the Lord” (1 Thessalonians 4:17) in the life to come. We are counting on it.