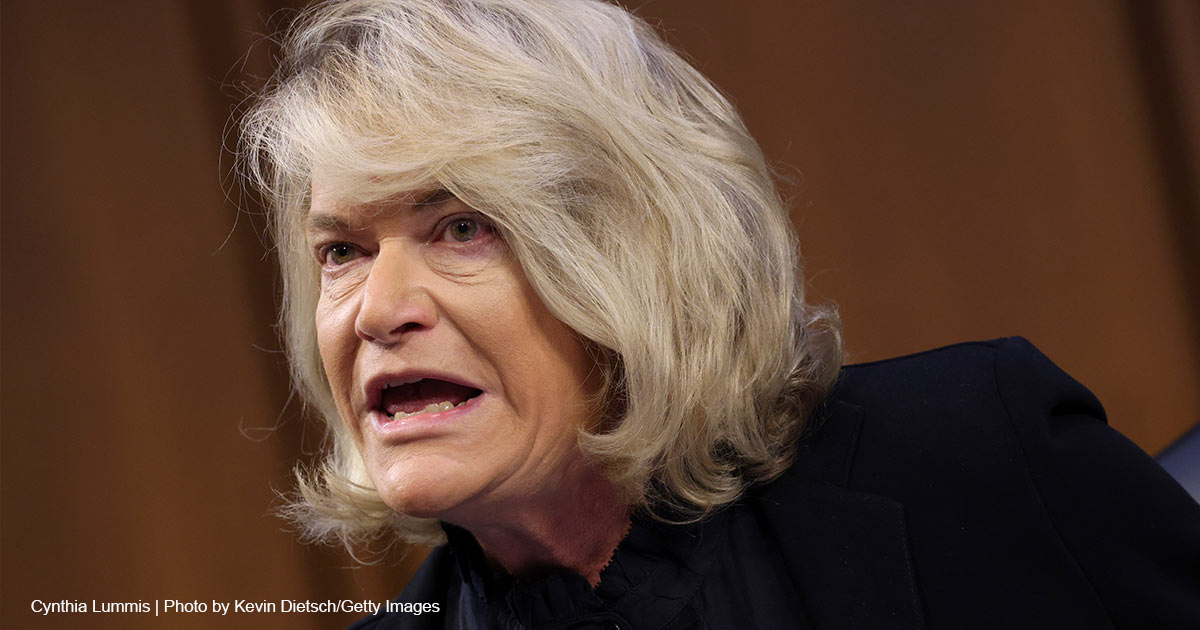 Senator Lummis’s Marriage Vote and the Collapse of Christian Courage

For conservatives, who’ve spent the better part of six months in the trenches for an institution Republicans have always stood for, there were plenty of sad storylines from Tuesday night’s marriage vote. Perhaps the saddest, at least to the movement’s veterans, was watching men and women they trusted try to justify the abandonment of their longtime principles. Some didn’t bother. Others, like Senator Todd Young (R-Ind.), took to the pages of their state’s newspapers to mitigate the damage back home. And then there was Cynthia Lummis (R-Wyo.), whose tragic and flawed thought process was laid bare for everyone to see — and lament.

In an all-black outfit, fitting for a funeral of freedom, Lummis talked about the personal journey that led her to betray her faith and base. It was a “painful exercise in accepting admonishment,” Lummis admitted. There was “fairly brutal self-soul searching,” which she admitted was “entirely avoidable had I simply chosen to vote no.”

For a full minute, Lummis launched into a series of compelling reasons to oppose the bill, arguments that should have talked her out of this misguided path. “The Bible teaches that marriage is between one man and one woman,” she said. “I accept God’s word — including God’s word as to the definition of marriage. I support my church’s adherence to that biblical pronouncement. I support Wyoming’s statute, which codifies that definition. I find solace in people and organizations that share my beliefs.”

Then, in a surprisingly candid twist, Lummis talked about the hostility she’s experienced from the Left for her views. “I, and many like me, have been vilified and despised by some who disagree with our beliefs. They do not withhold bitter invective. They use their own hateful speech to make sure that I and others who believe as I do now, that we are hated and despised by them.” Then, looking up from her script, Lummis said pointedly that people on the conservative side of marriage “can relate to ill treatment.”

So why stray? Why turn her back on years of personal and public conviction? Because, in Lummis’s mind, surrender is the only way to prove her tolerance. “These are turbulent times for our nation,” she said soberly. “Americans address each other in more crude and cruel terms than ever in my lifetime,” she insisted, "[from] those who advocate for tolerance. … We do well by taking this step, not embracing or validating each other’s devoutly held views, but by the simple act of tolerating them. And that, Madam President, explains my vote.”

Unfortunately, it explains much more than Lummis’s vote. It explains the collapse of Christian courage. Like Senator Young, who wrote that “dignity and respect are not a zero-sum proposition,” Lummis conflates civility with conformity. Decency has never required compromise, a fact that Florida Governor Ron DeSantis (R) should have proven to every Republican by now. And even if we did redefine tolerance to include the discarding of our sincerely held beliefs, as Lummis urges, guess what? These are terms the other side will never agree to.

“By voting for the (Dis)Respect for Marriage Act and creating a federal cause of action against those who hold the faith she claims to share, she doesn’t merely tolerate them,” Family Research Council’s Joseph Backholm warns, “she gives weapons to those she disagrees with. Most importantly,” Backholm told The Washington Stand, “Senator Lummis seems to be missing the fact that tolerance is not a Christian virtue. We should be kind to those we disagree with — and certainly the Constitution provides equal protection to everyone, regardless of their beliefs. But just as Scripture never requires every relationship to be treated the same, as Lummis acknowledged, the Constitution doesn’t either. As Christians, not only are we not required to tolerate everything, there are some things we are forbidden from tolerating.”

Dr. Carl Trueman, professor at Grove City College, wondered, “How long can you profess to be a credible Christian when you move down this line? … You’ve got to be very careful when you start tinkering with the notion of human sexuality,” he told Family Research Council President Tony Perkins on “Washington Watch.” “You’re starting to tinker with the notion of what it means to be human. And if you’re going to abolish the human, then really your whole Christian theology has to be reconstructed and will be reconstructed along lines that don’t really track with what the Bible teaches and what orthodoxy has taught.”

The parable of the wheat and tares (Matthew 13:24-30) has plenty of painful applications for the modern church, as more people willfully walk in the world’s deceptions. “[T]he issue of human sexuality in general and marriage in particular is really sharpening the kind of lines that are emerging in the Protestant and evangelical world at the moment,” Trueman warned. “The fact that [a radical same-sex marriage bill is] actually receiving support from many ‘evangelical leaders’ — and is also receiving support from what one would have hoped would be conservative members of Congress — is indicative of the times in which we’re living.”

At the end of the day, Trueman cautioned, “One can’t pick and choose when it comes to the Christian faith. When you try to use that model relative to your faith, you end up making yourself God, and you end up abandoning any vestige of Christian orthodoxy whatsoever.” As the culture plunges deeper into darkness, just how far will leaders like Lummis and Young fall? “I will be very interested to see where those who won’t draw a line on this issue, where they will ultimately be willing to draw a line. … I am not confident that they will be willing to draw any significant lines at all if it costs them their place in the elite class.”

So what can faithful, God-fearing Christians do? How do we keep going when so many believers are turning their backs on basic truth? We have to stick together, Trueman urged. “We have to be part of a strong Christian community. We have to be under the teaching of the word. We have to be taking the sacraments together. … We have to support each other.” Then, we have to keep fighting.

“It’s absolutely appropriate that Christians use the civil liberties that they do have and the civil rights that they do have in order to press for a good policy. And we should also pray for our congressmen and our representatives. It’s hard, I think, to be a faithful congressman at this point. We need to pray that the Lord will strengthen those He’s placed above us in authority to make them wise and to do the wise thing.”

No matter what happens, Trueman emphasized, no matter how many are standing with you — or how many have walked away — “You never lose by speaking the truth.”