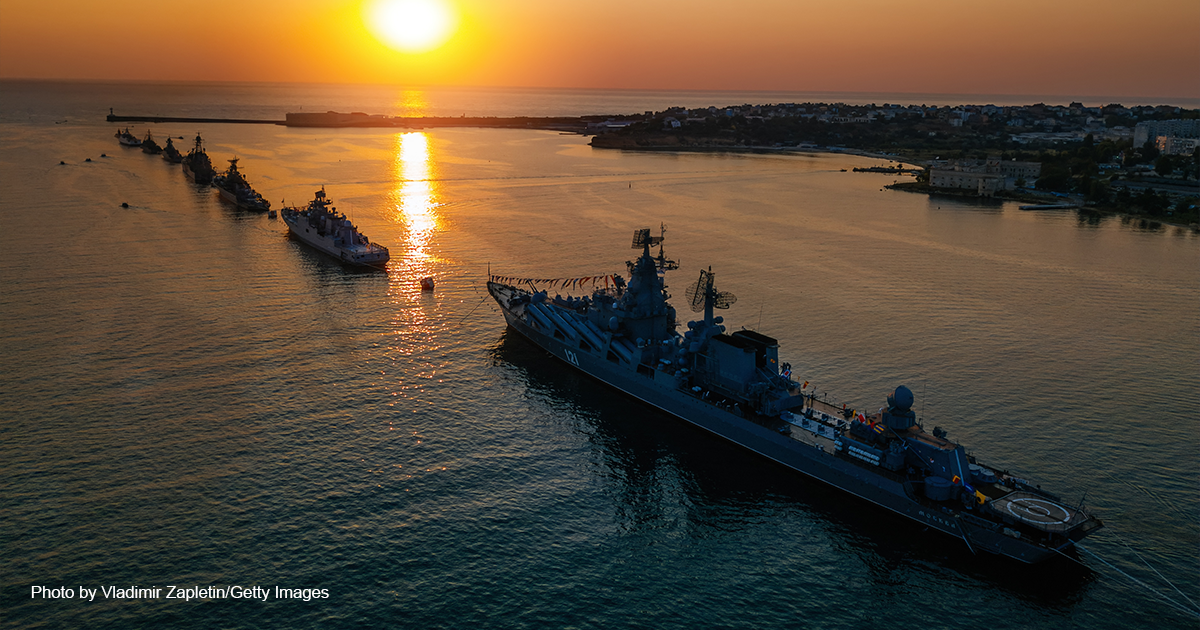 Vladimir Putin recently likened himself to Russia’s first emperor, Peter the Great. Peter ruled for nearly 43 years, dying in 1725 after decades during which he waged war against opponents and weaker powers.

One of Peter’s most extensive campaigns was the “Great Northern War” against Sweden. It lasted 21 years. This is, apparently, what Putin is willing to do in Ukraine: Not quit until he has exactly what he wants. Arguing that at least parts of Ukraine historically were part of Russia, Putin told a group of young Russian entrepreneurs, “Apparently, it also fell to us to return (Ukraine to Russia)” and thereby “strengthen” Russia. Russian imperialism is in full swing.

And, apparently, it’s only begun. To break Ukraine’s resistance, Russia has blockaded the Black Sea, access to which is critical for Ukrainian shipping. Long known as the “breadbasket of Europe,” Ukraine grows crops “for export across the European Union, as well as China, Turkey, India, Egypt and Africa.” In fact, “More than 70 percent of the country is made up of prime agricultural land.” As agriculture journalist Joanne Knox reports, “Ukraine has the ability to provide enough food for half a billion people, maybe more.”

If the blockade continues, many of those millions of people will not be fed. The Atlantic Council notes that “Russia’s blockade of Ukraine’s Black Sea ports is strangling the country’s economy and also threatening to spark a global food security crisis by preventing Ukrainian agricultural exports from reaching international markets.” Defense Department spokesman John Kirby has put the situation quite succinctly: The Russians are “weaponizing food.”

There is no easy answer to ending the blockade. While “NATO leaders are … seeking a settlement to lift the blockade that may surrender Ukrainian territory and sovereignty to Russia,” clearly this is not an optimal outcome. It would simply be the triumph of a brutal and stronger power over a weaker one.

Former U.S. ambassador to NATO Ivo Daalder is calling for “navy ships from a coalition, preferably including grain-importing countries like Egypt,” to “escort (Ukrainian) freighters, and minesweepers” that “could clear a safe path for (Ukraine’s) ships.” Ships from many nations, escorting unarmed Ukrainian sea vessels, might well discourage Putin from taking military action against them.

But Putin’s eyes are not fixed on Ukraine. They prowl the European landscape, seeking what lands Russia might devour. Lithuania, a NATO member, has stated it “would ban the transit of some EU-sanctioned goods coming from Russia across its territory to the Russian exclave of Kaliningrad,” a Russian city-state wedged between Lithuania and Poland. Lithuania is also a member of the European Union, which imposed economic sanctions on Russia following the invasion of Ukraine.

Although Lithuania’s move could well have been anticipated, the Putin regime did not take this well. Kaliningrad is home to Russia’s Baltic fleet. Supplying its naval resources will now be harder for Russia given that its land route to Kaliningrad (through Lithuania) will be cut off. Former KGB spy Nikolai Patrushev, currently the secretary of Russia’s Security Council, huffed that there would be “a serious negative impact on the population of Lithuania.”

This threat should be taken seriously. Putin has called the fall of the Soviet Union “the greatest geopolitical catastrophe of the (20th) century.” The three Baltic nations, Lithuania, Latvia, and Estonia, were once part of the Soviet Union. As many as one million ethnic Russians live in the three countries, which Putin might well use as an excuse for invasion of them. This was his espoused reason for invading Ukraine, claiming that there was a “genocide” against ethnic Russians. This baseless and ridiculous claim could also be made by Putin against the Baltic states.

As the United States and its allies continue to supply military supplies to the courageous and dogged Ukrainian military, the brutal Russian aggression against Ukraine continues unabated. Putin’s idolatry of Russian nationalism and his sense of rage over Russia’s Cold War defeat are causing massive loss of life and, potentially, the starvation of millions.

Vladimir Putin should turn his attention from Peter the Great to Isaiah the prophet. It was the latter who proclaimed that God “brings princes to nothing, and makes the rulers of the earth as emptiness. Scarcely are they planted, scarcely sown, scarcely has their stem taken root in the earth, when he blows on them, and they wither, and the tempest carries them off like stubble” (Isaiah 40:23-24).

Christians should pray that Mr. Putin will repent. May he see that God’s eternal judgment is infinitely more dangerous than any loss of temporal national power.