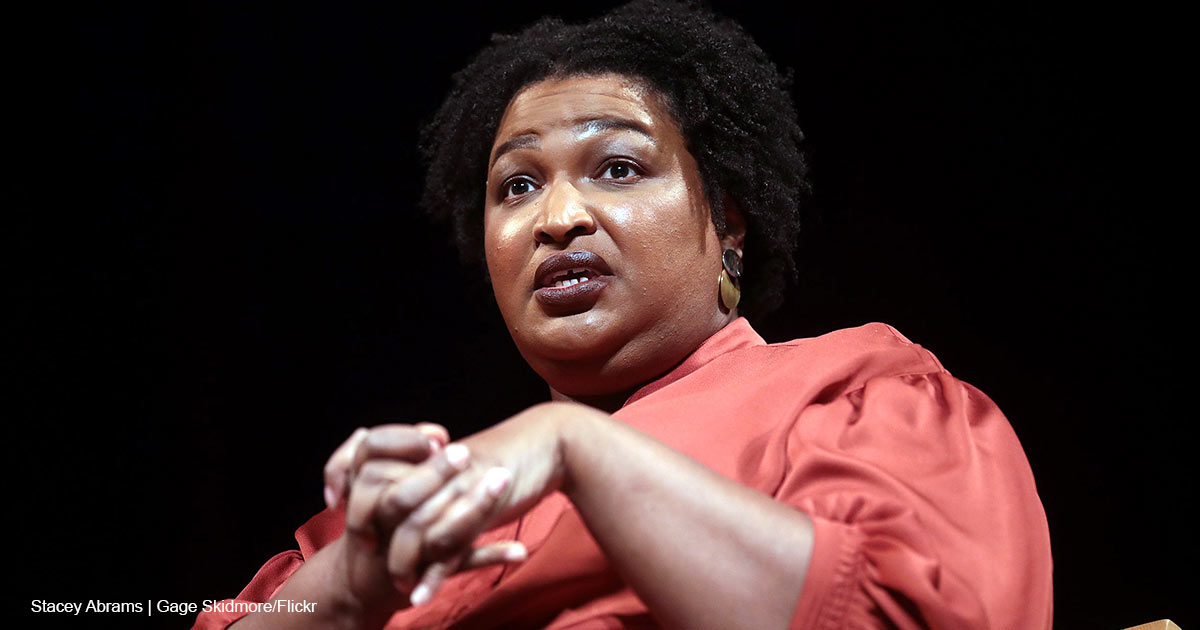 As American families increasingly buckle under the weight of rising inflation, Democratic gubernatorial candidate Stacey Abrams (Ga.) thinks she has the solution: simply abort your children so you can afford food and gas! According to Abrams, “having children is why you’re worried about your price for gas, it’s why you’re concerned about how much food costs.”

Unfortunately, Abrams’s macabre perspective is an accurate depiction of the abortion industry’s clientele. The vast majority of women getting abortions do so because they are poor and having a child costs money. Three quarters of women seeking abortions are low-income; 59% already have children. According to a famous study from the pro-abortion Guttmacher Institute, 73% of women who get abortions cite financial hardship as their motivation.

If abortion is so “normal,” why are the women getting them typically economically disadvantaged and worried about the little mouths they are already committed to feeding? The numbers don’t lie — what mothers really need is support, not abortion. Thankfully, Republican legislators are leading the charge to pass legislation that addresses the root cause of why most abortions occur.

Some Republican legislators are seeking to keep more money in families’ pockets by reworking tax policies to fit their needs. Senator Marco Rubio’s (R-Fla.) proposed Providing for Life Act would massively expand the Child Tax Credit and assist expectant parents by allowing them to claim tax credit for unborn children.

Rubio’s pro-family legislative package would also make the adoption tax credit fully refundable, allow new parents to pull from their Social Security benefits to finance paid parental leave, and help states require biological fathers to financially contribute to out-of-pocket medical costs related to pregnancy. This legislation is perhaps the gold standard of pro-life policies that champion the needs of mothers — but the list doesn’t end there.

Down in Oklahoma, Republican Governor Kevin Stitt is supporting recommendations to provide new mothers with up to a full year of postpartum Medicaid coverage. Stitt is also supporting a policy change to raise the state’s income threshold for pregnancy-related benefits from 138% to 205% of the federal poverty level. Other pro-life states that have protected unborn life at conception have also extended Medicaid coverage up to 12 months postpartum, including Indiana, Louisiana, Tennessee, and Kentucky.

In Georgia, the Living Infants Fairness and Equality (LIFE) Act sponsored by Republicans requires biological fathers to pay child support and allows an unborn child to be claimed as a tax dependent from the moment his or her heart starts beating.

Republican Florida Governor Ron DeSantis has also emphasized the importance of saving families money on child-related expenses by proposing a permanent tax exemption for necessities like diapers, baby wipes, cribs, strollers, and clothes and shoes for kids under five. DeSantis also signed a bill that allocated $70 million in funding to support family and youth, including mentorship programs to address the crisis of fatherlessness.

Other pro-family legislation includes measures to support pregnancy resource centers (PRCs) that provide free material resources, parenting education, counseling, and, in some centers, even medical services for mothers and babies; in 2019, PRCs provided over $266 million in support to around two million people.

Seventy-four percent of Americans across the political spectrum support public funding for these essential centers of support for mothers. Pro-life states like Mississippi are answering this charge with measures like tax credits to PRCs. In 2022, Mississippi passed legislation providing $3.5 million in assistance for mothers by supporting PRCs.

Meanwhile, what are our friends on the Left doing to support women? Relentlessly, as Stacey Abrams has demonstrated, their only suggestion is abortion. From demonizing the adoption process to harshly mischaracterizing pregnancy resource centers, it seems that abortion supporters will reject literally any avenue that gives mothers another option.

Even aside from their radical late-term abortion agenda, Democrats have spiked inflation to 40-year highs, creating an economy in which even stable two-parent households are struggling to get by — economic conditions in which, of course, the abortion industry thrives.

Having a family should not be a luxury intended for only the wealthy and prosperous. No mother should be manipulated into believing that the best option she can offer her unborn child is death; abortion is not a valid solution to the real problems that families face.