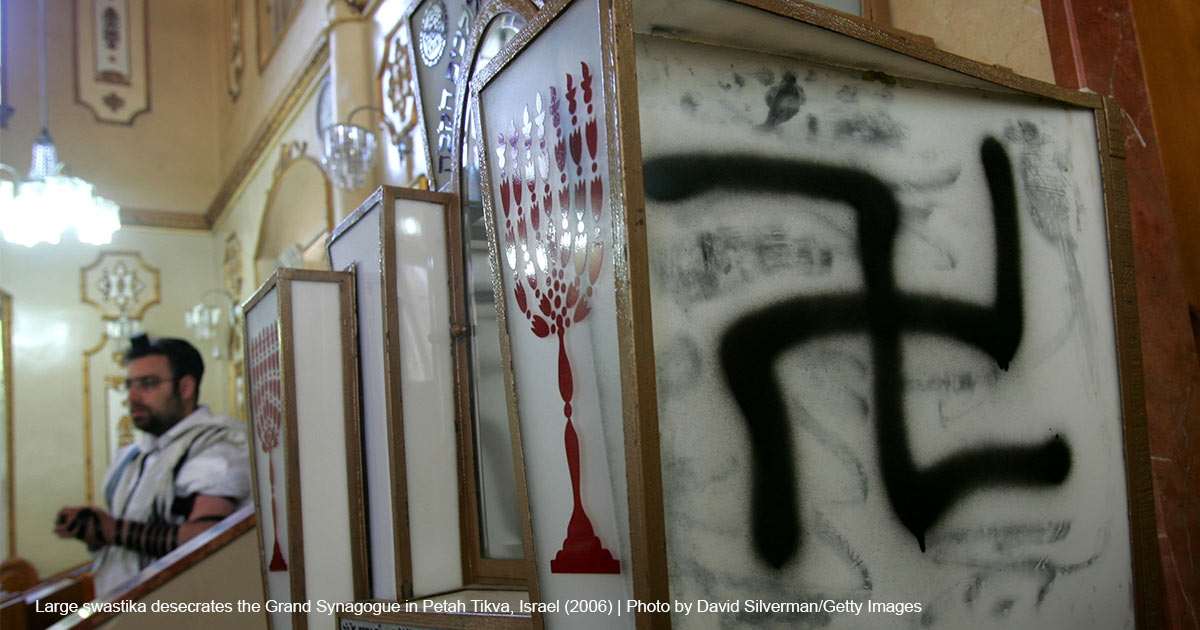 There are some things that never grow old. Baseball in the spring. Ice cream any time. Easy conversation with old friends. And, sadly, anti-Semitism.

Earlier this year, Israel’s Tel Aviv University published “The Antisemitism Worldwide Report 2021.” It reveals that the most serious increases in anti-Semitic activity occurred in the U.S., Canada, the U.K, France, Germany, and Australia.

Here in the land of the free, “the number of anti-Jewish hate crimes recorded in both New York and Los Angeles were almost twice that” of 2020. In New York, “Orthodox Jews [have been] assaulted on busy streets in Midtown Manhattan and in quiet neighborhoods in Brooklyn. Swastikas [have been] drawn on a Long Island home and spraypainted onto Wall Street’s Charging Bull statue.”

This February in Chicago, there were six dangerous acts of anti-Semitism in one weekend, including a man attacked as he entered a synagogue, swastikas sprayed on the facilities of a Jewish high school, and kosher food stores that had their windows smashed.

In May, someone tried to set fire to Portland, Oregon’s Congregation Beth Israel synagogue and scrawled an anti-Semitic insult on an outside wall. The synagogue’s rabbi reported that the vandalism took place “just days after the synagogue observed Yom HaShoah, a Holocaust remembrance day in which the congregation celebrated six local survivors of the Nazi’s attempted extermination of the Jewish race.”

Why this rise in acts of vicious, irrational hatred toward the Jewish people? One obvious reason is that the frightened, unsuccessful, and ignorant love to pick on the weak, as do all bullies. Jews are a minority and, like most Americans, don’t expect to be attacked simply for walking along a sidewalk, so they are ripe targets for abuse.

Then there are the chronic conspiracy theorists who believe that wealthy Jewish bankers are manipulating everything from global economies to Hollywood movies, all to gain control of the world. As journalist Yair Rosenberg notes, the conspiracy theorists believe that “Jews, who are a tiny, tiny proportion of the world — 0.2% of the world population — actually run everything … They control politics, economics, the government, media. And therefore, they exercise outsized power.”

As to Israel, why a tiny country with a land mass slightly larger than the state of New Jersey would so enrage so many of its neighbors is beyond understanding. Especially given the astonishing corruption of the Palestinian regimes and brutal fanaticism of groups like Hamas.

Sometimes, anti-Semitism can be abated simply by people talking with one another and realizing their stereotypes about one another are foolish. Or if someone proposes a loony idea about Jews secretly plotting to despoil the central banks of Europe, he can be shown factual and logical evidence as to why this idea is, as noted, loony.

However, the persistence of anti-Semitism throughout history speaks to another, deeper issue. There is something underlying these cowardly and/or maniacal beliefs, something as old as Abraham and as recent as the Holocaust.

Jesus said that “salvation is of the Jews” (John 4:22). Paul the apostle affirmed God’s ongoing love for the Jewish people when he wrote that to Israel “belong the adoption, the glory, the covenants, the giving of the law, the worship, and the promises. To them belong the patriarchs, and from their race, according to the flesh, is the Messiah, who is God over all, blessed forever. Amen” (Romans 9:4-5).

Should it come as any surprise that the “ancient serpent, the devil” (Revelation 20:2) would want to destroy those God says, “found grace in the wilderness; when Israel sought for rest, the LORD appeared to him from far away.’ I have loved you (Israel) with an everlasting love; therefore I have continued my faithfulness to you’” (Jeremiah 31:2-3)? Those God loves with a special and enduring love are, unquestionably, targets of Satan’s enduring hate.

Remember, the enemy entered Judas so as to motivate him to betray Jesus (Luke 22:3). Why? Because the idea that God would provide a Messiah for His chosen people and a Savior for all mankind was odious to him.

Of course, God made a cosmic fool of Satan through the victory of His Son on the cross and in His resurrection. Yet the “ancient serpent” doesn’t quit. While the devil’s doom is sure, his human instruments — perhaps not possessed but certainly influenced by him — keep working to destroy the children of Abraham, Isaac, and Jacob.

Too bad for them. “He who touches you” — the Jewish people — “touches the apple of His eye,” declared the prophet Zechariah (2:8). The witness of history vividly bears this out. Watch films of what had been the cities of Nazi Germany from about 1945 through about 1950. What isn’t rubble is damaged, broken, crushed. America forgets this to its grave peril.

It is up to all who follow Jesus to actively repudiate those who demean or, worse, hate the Jewish people. The descendants of those Moses led out of Egypt should have no better friends than those God, in His great kindness, has taken from darkness to light. Their journey is led by a Galilean Jew named Jesus, heir of David’s throne, the Lion of Judah, the Lamb of God, Whom to know is life eternal (John 17:3).