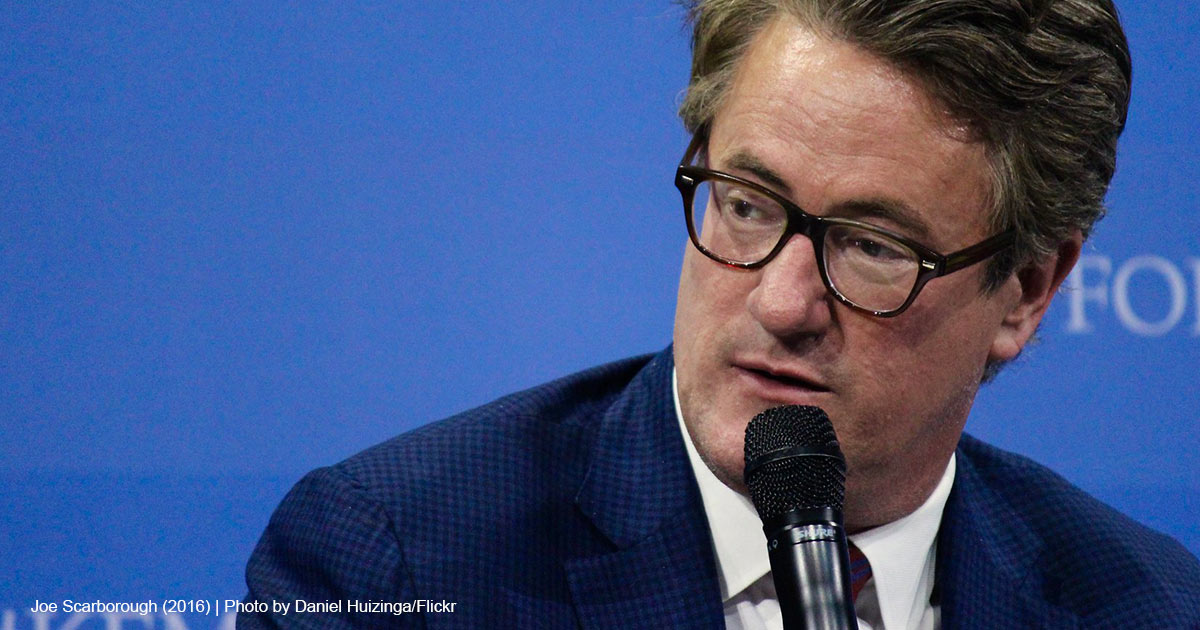 On Friday, MSNBC host Joe Scarborough excoriated Christians who oppose abortion on the grounds that Jesus “never once mentioned it.” Reducing the gospel to a single issue is “heresy,” he said, and those who do so “are using Jesus as a shield to make 10-year-old, raped girls go through a living and breathing hell here on earth.” He argued that pro-life state legislators believe “that life begins at fertilization and ends at childbirth.” Here’s the full context of his mini-speech:

Let me just say, as a southern Baptist, that grew up reading the Bible — maybe a backslidden Baptist, but I still know the Bible — Jesus never once talked about abortion. Never once. And it was happening back in ancient times. It was happening back in his time. Never once mentioned it. And for people perverting the gospel of Jesus Christ down to one issue, it’s heresy. If you don’t believe me, if that makes you angry, why don’t you do something you haven’t done in a long time? Open the Bible. Open the New Testament. Read the red letters. You won’t see it there.

And yet there are people who are using Jesus as a shield to make 10-year-old, raped girls go through a living and breathing hell here on earth. They’ve also conveniently overlooked the parts of the New Testament where Jesus talks about taking care of the needy, taking care of those who are helpless, who live a hopeless life. Because they believe — these state legislators believe — that life begins at fertilization and ends at childbirth.

The accusation cuts deep. Scarborough argues that the very faith that motivates Christians to political engagement cuts against that very engagement. The argument seems sounder because it begins with a claim that can’t be proven false. Search the words of Jesus, and you’ll never find “abortion” mentioned. In fact, search the whole Bible, in any major translation, and you won’t find the word “abortion.” But that doesn’t mean that Christians have no response, nor even that Scarborough’s argument is sound. Jesus also never mentioned the word “trinity,” but to deny that is heresy.

The first item to address is Scarborough’s condemnation of single-issue voters, that it’s “heresy” to pervert the gospel down to a single issue. The gospel itself, the good news that God has chosen to save us from deserved, eternal punishment through the substitutionary death of Jesus Christ, and that we now are reconciled to God by grace through faith, freed from the power and penalty of sin, is rarely a rationale to cast a ballot for one political candidate over against another. But the radical message of the gospel does have massive implications for how we live our lives, and some of those can influence how we vote.

Sometimes, we can deduce a Christian position on a political issue in a straight line from the Bible, while other implications are arrived at less directly (via a jagged line). Southern Baptist pastors Jonathan Leeman and Andy Naselli take abortion as an example of a straight-line issue, “the Bible explicitly teaches that murder is sinful; abortion is a form of murder, so we should oppose abortion. That’s a straight line. Accordingly, both of our churches would initiate the church-discipline process with a member who is advocating for abortion.” In contrast, they argue, “fellow church members … should recognize Christian freedom on jagged-line political issues.” Individual members may or may not have strong convictions about various jagged-line issues, but they must agree on the straight-line issues.

For many Christians, abortion is not only the most obvious straight-line issue (with marriage a close second), but a moral evil of such gravity that it outweighs all other moral considerations combined. That’s not to say that they have reduced the gospel to a single issue. Rather, the gospel has many applications to public policy, and these Christians are demonstrating a sophisticated, prudential framework for judging between them.

Scarborough insisted that “Jesus never once talked about abortion,” even though it was practiced at the time, and so he didn’t consider it evil. Christians in the first century after Jesus’ death would completely disagree. According to the Didache, an early compilation of Christian teaching, “the Lord’s teaching through the twelve apostles to the nations” includes an exhortation, “you shall not murder a child by abortion nor kill that which is born.”

Indeed, Jesus reaffirmed the Old Testament command, “you shall not murder” (Matthew 19:18), which he said comes out of the heart and “defile a person” (Matthew 15:19-20). Some people might affirm a commandment against murder but stipulate a carveout to allow abortion; that is Scarborough’s position. But far from curtailing the prohibition on murder, Jesus strengthened it. “You have heard that it was said to those of old, ‘You shall not murder; and whoever murders will be liable to judgment.’ But I say to you that everyone who is angry with his brother will be liable to judgment” (Matthew 5:21-22).

Abortion isn’t the only first-century moral evil that Jesus did not explicitly condemn during his earthly ministry. Jesus “never once talked” about slavery, imperialism, racism, sexual exploitation, or political representation. Using Scarborough’s logic, that means Christians should not be politically active in fighting against these evils; but that can’t be right. Rather, Christians can extract principles from Jesus’ teaching to condemn all of these evils, just like abortion. For instance, “the emphasis on love motivated Christians to care for society’s vulnerable, including children (pre-born and discarded infants),” wrote David Closson, director of FRC’s Center for Biblical Worldview.

Jesus did not come as a good moral teacher, whose aim was to spell out a comprehensive system of morality by which people should live their lives. Jesus came into the world “to give his life as a ransom for many” (Mark 10:45). He did teach good morals as part of this saving mission, so that truth and light would distinguish those who believed in him (John 12:46, 18:37). But first and foremost, Jesus came to teach people that he was the Son of God (Matthew 16:16), the only way of salvation (John 14:6). For those who see Jesus primarily as a good teacher, they have either obscured this fact, or it has been hidden from them.

What Jesus Does Mention

On the other hand, Scarborough’s logic could put him and his fellow leftists in an awkward spot on other issues. By arguing that Christians should not care about abortion because Jesus doesn’t mention it, he implies that Christians should care about moral issues about which Jesus does teach. Jesus teaches strongly against lust (Matthew 5:27-30), divorce (Matthew 5:31-32, 19:1-12), and retaliation (Matthew 5:38-42). These have obvious political applications at odds with the Left’s current priorities.

In particular, Scarborough exhorts Christians to “read the red letters,” a non-inspired stylistic choice some translations use to indicate the words of Jesus. The implication is that these words are more authoritative than the rest of Scripture. As a self-described former southern Baptist, Scarborough should know better. According to the SBC’s Baptist Faith and Message:

The Holy Bible was written by men divinely inspired and is God’s revelation of Himself to man. It is a perfect treasure of divine instruction. It has God for its author, salvation for its end, and truth, without any mixture of error, for its matter. Therefore, all Scripture is totally true and trustworthy. It reveals the principles by which God judges us, and therefore is, and will remain to the end of the world, the true center of Christian union, and the supreme standard by which all human conduct, creeds, and religious opinions should be tried. All Scripture is a testimony to Christ, who is Himself the focus of divine revelation. (Emphasis added.)

Besides, the “red letters” don’t say anything different than the rest of the Bible. Jesus quotes extensively from the Old Testament, citing the prophets, the 10 Commandments, and even the two greatest commandments, of which he says, “on these two commandments depend all the Law and the Prophets.” Jesus did not “come to abolish the Law or the Prophets; I have not come to abolish them but to fulfill them” (Matthew 5:17). He even rebuked his contemporaries for not believing the Old Testament. “If you believed Moses, you would believe me; for he wrote of me. But if you do not believe his writings, how will you believe my words?” (John 5:46-47).

The most fundamental reason why everything Jesus says agrees with the rest of Scripture is because it all has the same author. God the Father, God the Son, and God the Holy Spirit have always been in perfect agreement about truth, and about how to reveal it to man. Jesus explained, “I have not spoken on my own authority, but the Father who sent me has himself given me a commandment — what to say and what to speak. … What I say, therefore, I say as the Father has told me” (John 12:49-50). Generally speaking, everything in the “red letters” is in the black letters too, and vice versa.

I have no illusions of convincing Scarborough that opposing abortion is a Christian response to our current political moment. I’m not even sure he was sincere about his own argument (as I’ve reasoned above, it’s logically incompatible with many of his own policy stances).

I do hope to reassure Christians that a moral and political worldview built upon the truth of Scripture is strong enough not to topple at the first gust of hot air. The faith once for all delivered to the saints will endure, despite the derision, oppression, and persecution of its opponents. Its builder is God. Its rock is Christ. And nothing can stand against him.