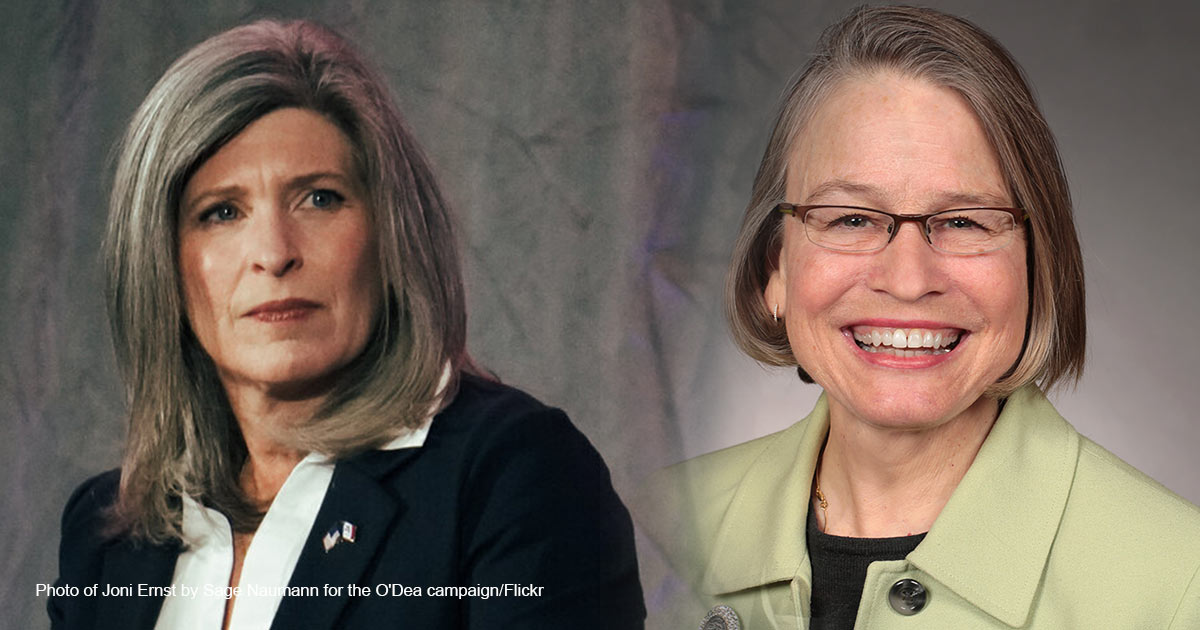 Senator Ernst the Latest to Face Blistering Backlash over Marriage

Days after the vote, it’s still a musical hot seat for the 12 Senate Republicans who bucked their base on marriage. Senator Todd Young (R-Ind.), Cynthia Lummis (R-Wyo.), Roy Blunt (R-Mo.), and others are facing fiercer-than-expected pushback for their traitorous decisions from back home. As the senators scramble to explain the inexplicable — their outrageous departure from core values — local Republicans are taking matters into their own hands. For Joni Ernst (R-Iowa), that means a very uncomfortable holiday with the Hawkeyes, where GOP leaders are a united front of disgust.

From Des Moines to Van Buren counties, Ernst’s detractors are getting louder by the minute. A dozen local Republican party chairs have moved to censure the senator, and more may be moving in that direction, Iowa sources say. Along with Ernst, some counties have taken particular exception to her co-conspirator, House Rep. Mariannette Miller-Meeks (R-Iowa), who also cast multiple votes to redefine marriage. That leaves Iowa Republicans with no choice, her party says. Starting next year, they’re on the hunt for primary challengers.

In the resolution directed at Miller-Meeks (who won her 2020 election by a whopping six votes), the GOP officially breaks with the congresswoman, insisting, “A failure to adhere to the planks of the Iowa Republican Party Platform will require the Des Moines County Republican Party to recruit a primary challenger to run against Rep. Miller-Meeks in the 2024 House of Representatives election.” The chairs point out that they have “generously waited” until after the midterm elections to confront her, but pulled no punches on what the fallout would be.

The same language takes aim at Ernst, explaining: “Whereas the Pelosi-Schumer ‘Respect for Marriage Act’ poses an existential threat to religious liberty and tax-exempt status of organizations; Whereas homosexuality clearly violates the Laws of Nature and of Nature’s God, the source of our rights; Whereas marriage is the sacred lifelong union between a man and a woman; Whereas the family is the single most important institution in society and the smallest unit of government besides the individual; Whereas the Republican Party of Iowa affirms these principles in the 2022 Platform, Liberty Section, Number 13,” both women have violated “every one of these principles,” Republicans conclude.

Ernst took a surprisingly unapologetic tone, telling reporters, “I don’t agree with the censure. But I will say that I stand by my vote, and I hope that people will actually read the bill and understand [that] we have just improved on religious liberty protections — not just in Iowa, but across the United States.”

But, as Family Research Council vice president Travis Weber points out, the problem isn’t that Americans haven’t read the bill — the problem is that Ernst hasn’t. This bill doesn’t offer any new religious freedom protections under federal law, Weber fired back in a series of scathing rebuttals to Senators Ernst, Young, and Tillis’s pathetic public statements. “Claiming these are ‘improvements’ on religious liberty protections is only possible by comparing them to a field where no protections exist!” Weber argues. “Virtually no significant federal statutory religious freedom protections in the context of sexuality and marriage have passed Congress since the Obergefell v. Hodges Supreme Court decision. … These protections are not robust; they are pitiful.” Far from protecting people of faith, this law opens the door to severe persecution of non-conformists. Saying otherwise, Weber emphasizes, “is silly, foolish, and dangerous.”

Miller-Meeks’s colleague, Rep. Michael Burgess (R-Texas) blew apart the duo’s logic, reiterating to Family Research Council President Tony Perkins that all the bill does is “restates the constitutional protection that already exists — but only if you’re a church.” “And if you’re a church school or some other connected activity, you may not be protected at all.” Not only that, he said on “Washington Watch,” but now “there’s now a right of private action that someone can bring a civil suit against you on behalf of your supposed opposition to same-sex marriage. So it really … took things much farther in a direction where they didn’t belong.”

Quena Gonzalez, senior director of Government Affairs at FRC, agreed, pointing out that this law wasn’t created in a vacuum. “It was enacted more than a decade into the fight in the courts over how to treat the men and women who continue to believe in natural marriage. Dozens of people like Barronelle Stutzman, Jack Phillips, and Melissa Klein have been forced to go to the courts to defend their right to continue to live out their beliefs about marriage, and millions of others have been silenced. Although the law’s nonbinding findings affirm that existing protections (the First Amendment and the Religious Freedom Restoration Act) continue to apply, those tepid reassurances pale in comparison to the immense bludgeon that this law gives to activists to drag people of faith into the courts. This bill arguably creates a national policy on same-sex marriage, and equates opposition to it with racism.”

So when Ernst says, “What they’re doing is censuring me for … actually providing greater religious freedoms for everyone across the United States of America,” she’s feeding a vicious lie that puts a target on the back of every U.S. Christian. And she knows it.

Which is why John Jennison, Des Moines County Republican Party’s central committee chairman, and so many other Hawkeyes couldn’t let this injustice pass. They’d already been considering a resolution against Miller-Meeks for her July vote when the bill landed in the Senate like a post-election hot potato. Local Republicans were furious with the House vote but assumed Ernst would stick to her conservative guns. “We hoped that it would have gotten rejected,” he told Perkins, “or at least Senator Ernst would have voted against it. … But she went ahead and passed it again. And so … at a meeting, we put together a formal resolution [condemning] both Senator Ernst and Representative Miller-Meeks.”

At the end of the day, Jennison said, “I think there is grassroots support for [this]. We would like our representatives and senators to support our platform.” This is a document, he explained, that starts at the precinct level and is approved through all of the counties, districts, state, and Republican Party. If elected leaders can’t defend that platform, Iowans want to know, then what will they defend? If they won’t do “what we put them in Washington to do,” then it’s time to find people who will.