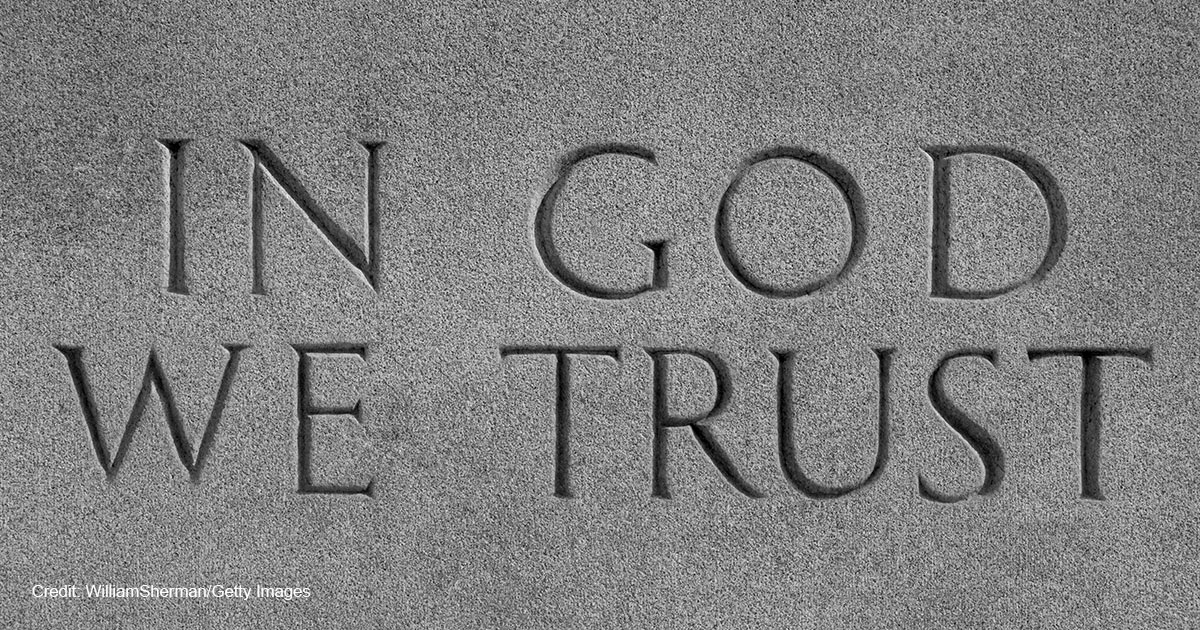 Texas is Right. "In God We Trust" Belongs in Our Schools.

Texas public schools are beginning to hang posters featuring the national motto, “In God We Trust.” While that hardly seems newsworthy, the intense backlash that the posters have garnered is newsworthy — and points to troubling cultural trends.

The posters are the result of a new law, passed by the Texas state legislature and signed into law by Governor Greg Abbott (R) in June 2021. It requires public schools to display a poster or framed copy of the United States national motto, “In God We Trust,” if the poster or framed copy meets the certain requirements — including having the U.S. flag centered under the national motto as well as a representation of the state flag. However, this only applies if such a poster is donated to the school; no state funds are being spent.

Sophie Ellman-Golan from Jews For Racial & Economic Justice told The Guardian, “These posters demonstrate the more casual ways a state can impose religion on the public.” A statement from the Southlake Anti-Racism Coalition said they were “disturbed” by the posters and concerned on behalf of “those who do not practice the dominant Christian faith.”

Yet, the national motto simply does not “impose religion.” Does walking by a poster in the hallway infringe on the freedom for Jewish or Muslim students to practice their faith? Certainly not. Does it coerce atheist students into believing in a God? Not at all.

Texas state legislators weren’t trying to advance a theocracy — they were simply making a way for posters with the national motto to be featured in public schools, if they are donated by a third party and made according to specifications. It’s also worth noting that federal courts have found that the phrase “In God We Trust” is not in violation of the Establishment clause.

The excessive reaction from some progressives in response to the possibility that the phrase “In God We Trust” would be displayed in schools should not come as a surprise. Hostility against religion, particularly Christianity, has been on the rise. Last month, Family Research Council released an extensive — though by no means exhaustive — report about rising intolerance against Christians in the West. The report identified 99 unique incidents of government infringements on the religious freedom of individual Christians in the West spanning from January 2020 to May 2022.

As mainstream culture moves further from moral values with Judeo-Christian roots, it’s inevitable that simple displays that include a belief in God — including our national motto — will be met with anger.

The reality is that the phrase “In God We Trust” has a long history in the United States, even before it was formally adopted as the nation’s motto by Congress and signed into law by President Dwight D. Eisenhower. Starting with the Civil War, the phrase was extremely popular and started to be printed on U.S. coins.

Two years before “In God We Trust” became the national motto, President Dwight Eisenhower talked about the significance of the addition of the phrase “Under God” in the pledge of allegiance. Eisenhower was leading a nation still scarred by the trauma of World War II, involved in the Cold War, and had good reason to be fearful about other ideological and security threats. In a 1954 Flag Day speech, he said:

Over the globe, mankind has been cruelly torn by violence and brutality and, by the millions, deadened in mind and soul by a materialistic philosophy of life. Man everywhere is appalled by the prospect of atomic war. In this somber setting, this law and its effects today have profound meaning. In this way we are reaffirming the transcendence of religious faith in America’s heritage and future; in this way we shall constantly strengthen those spiritual weapons which forever will be our country’s most powerful resource, in peace or in war.

Displaying the national motto “In God We Trust” is not offensive or exclusive. Rather, it is a call to lift our eyes to the transcendent, an important symbol of our collective heritage, and a reminder of the faith of our forefathers — a faith that sustained them through the wars and immense trials that threatened America’s survival. One does not have to share their faith to respect that heritage or to appreciate that it points to something bigger than ourselves.

America’s religious heritage is the very thing that has given us religious freedom for people of all faiths. The display of the words “In God We Trust” in Texas public schools will not impose religious beliefs or violate the Constitution. It will simply convey our national motto and represent our shared history — nothing about that should be controversial.