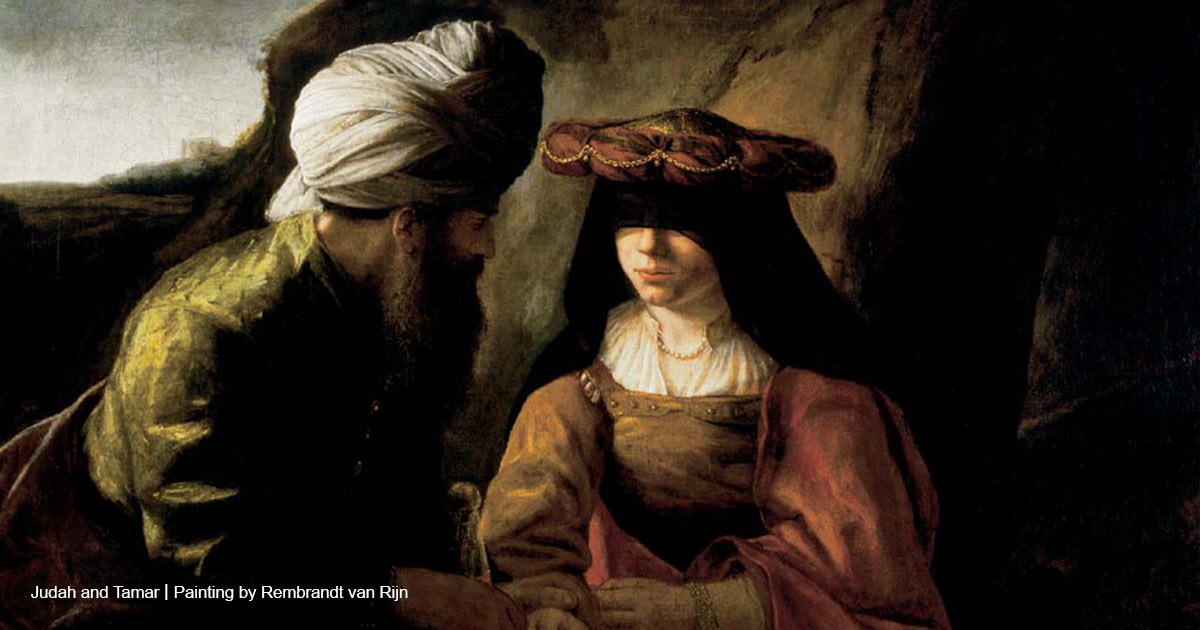 The Crises That Led to Christmas (Part 1): Tamar Endured the Crisis of Familial Abandonment

The genealogy of Jesus, as recorded in the first chapter of Matthew’s Gospel, includes many of the most recognizable and celebrated men of the Judeo-Christian tradition, such as Abraham, Isaac, Jacob, and the kings David and Solomon. Five women are also listed as being among Jesus Christ’s earthly ancestors: Tamar, Rahab, Ruth, Bathsheba, and, of course, his mother Mary.

In the coming days, we will explore the lives of these women. Each one faced challenging circumstances and endured hardships, but ultimately God saw fit to include them in the family line of the Messiah. Moreover, given that Matthew’s genealogy is not comprehensive — and that the inclusion of women’s names in a genealogy was unique for Matthew’s time and culture — we can be sure that each of these five women were included in this list for a reason. The Lord evidently wants us to learn important truths about His grace by considering these women and their stories. The beauty of God’s plan is that the unique “crises” that each woman faced ultimately led to Christmas.

The first woman listed in the genealogy is Tamar, who was the daughter-in-law of Judah, one of the 12 sons of Jacob. Genesis 38 says that Tamar’s husband, Er, was put to death by the Lord for unspecified wickedness. According to custom, it was the responsibility of Er’s brother, Onan, through “levirate marriage,” to marry his brother’s widow in order to provide an heir and keep property in the family. Onan, however, refused to accept this responsibility (likely motivated by sinful desires to assume the position of family leadership and a double inheritance). Because of his failure to fulfill the duties of levirate marriage, he sinned against his deceased brother and Tamar. For his actions, he was also put to death (v. 10).

After the death of his second son, Judah was fearful of giving any more sons to a woman he thought might be cursed, so he sent Tamar away to live in her father’s household. Although Judah promised Tamar that he would give her his third son in marriage, he evidently had no intention of keeping his word. This abandonment of Tamar was a grave evil.

Years later, Tamar learned that her father-in-law was visiting her hometown. Determined to carry on the family lineage of her late husband, Tamar disguised herself as a prostitute. Judah, not recognizing her as his daughter-in-law, solicited her and impregnated her. Three months later, Judah learned that Tamar had conceived a child and demanded she be put to death for prostitution. This hypocritical demand reveals not only the inconsistent manner in which men and women were treated in that day, but also puts in sharper relief the evil of Judah’s abandonment of a woman he was supposed to provide for and protect. Tamar immediately revealed that Judah was the father of her child. Judah responded that his daughter-in-law had been “more righteous than I” and rescinded his call for the death penalty.

The story of Tamar reveals God’s enduring faithfulness to Abraham in allowing the line of Judah to continue so that Jesus could be born from it. Tamar gave birth to twin boys — Perez and Zerah. From the line of Perez came King David, and later, Jesus Christ — the Son of God.

God saw fit to use Tamar, a widow who faced the crises of being abandoned by her family, feeling that she had no recourse but to act as a prostitute, and having her father-in-law threaten to have her killed, in the story of His Son’s birth.

Today, many women, like Tamar, are abandoned by their families. Many women feel their only option is to allow men to use them. Many women face abuse from those who should love and protect them. These women can find encouragement in God’s faithfulness to Tamar — a woman who was never deserted by God, even when her earthly circumstances were less than ideal.

Women who find themselves in situations like Tamar should know there are people ready to support them as they work to raise their children. Approximately 3,000 pregnancy resource centers (PRCs) are available across the country, seeking to provide material support, emotional encouragement, and spiritual healing to pregnant mothers facing difficult life circumstances. These centers allow women to advocate for their children even when they lack support from those who are closest to them.

Although Tamar’s husband, brother-in-law, and father-in-law all failed to love and care for her, and although Tamar’s act of prostitution was immoral, God still provided for her and saw fit to include Tamar and her family in the earthly lineage of His Son. Tamar’s life proves that God’s mercy is endless, and His ability to bring good out of our missteps is boundless.