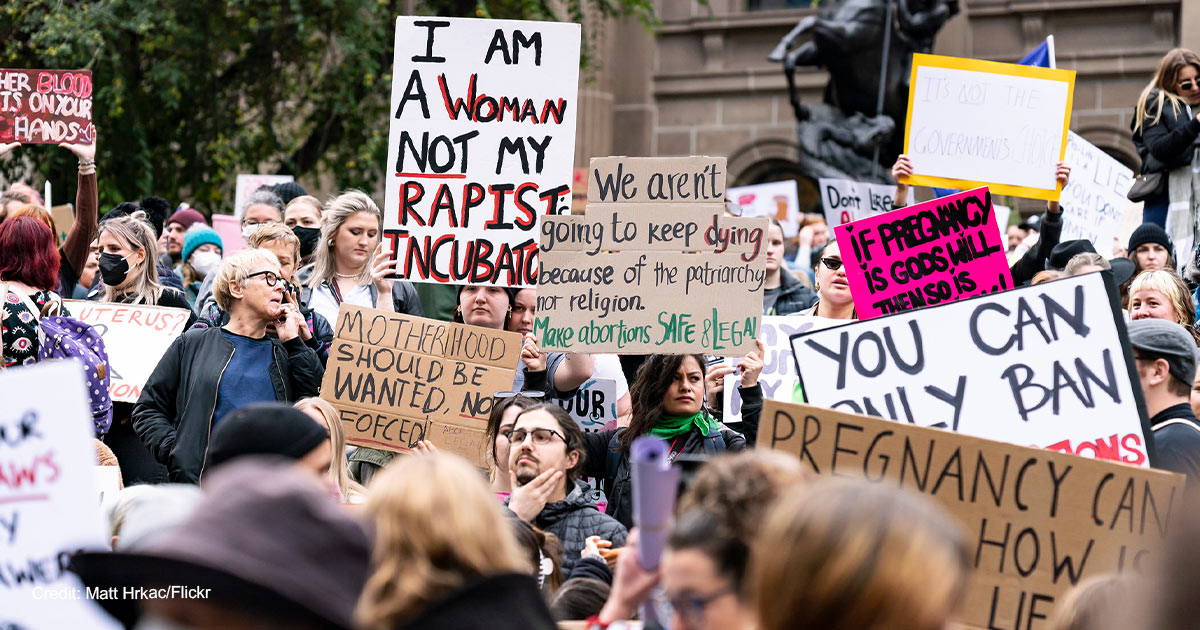 The Left Has Made Abortion Sacred. It Must Be Fought with the Gospel of Life.

The Cambridge Dictionary of the English Language defines the term “enshrine” as meaning, “to contain or keep something as if in a holy place.”

The operative word here is “holy.” There is a distinctly religious connotation to the word “enshrine.” It implies something that merits reverence, something that might be incorporated into worship.

So, when President Biden spoke the other day about making abortion-on-demand the law of the land, the news media — probably without much thought, of course — used religious language to describe the president’s proposal. Here’s a small sampling:

For the Left, abortion has become a kind of rite, something to be “enshrined.” Planned Parenthood, the nation’s largest abortion business, has even featured an article with the headline, “Abortion is sacred. And the Supreme Court can’t take that away from us.”

“Sacred.” “Enshrined.” These are words of religious faith, involving devotion to a higher being. It’s why, in a biting analysis of the philosophy of the “pro-choice” movement, Ben Shapiro calls abortion “the most vital leftist sacrament, an action of holy import.” He continues, “For the Left, abortion represents the power to deny the objective value of human life; it represents willingness to engage in the highest form of self-serving moral relativism.”

In this denial, abortionists and the women upon whom they prey engage in a theologically profound act. They dethrone God, the Author of life, and elevate themselves to His place of primacy. Abortion becomes a form of worship — self-worship, that is, through the sacrifice of another life.

Biden affirmed this evaluation, unintentionally, in his speech about making the “right” to abortion the law of the land. Saying he would offer legislation to this end on the first day of a new Congress — at least if Democrats kept both House and Senate — the president declared, “We cannot allow an out-of-control Supreme Court, working in conjunction with the extremist elements of the Republican Party, to take away freedoms and our personal autonomy.”

There it is: “Personal autonomy,” one of the premier idols of our time. “Autonomy” means, literally, self-rule or self-law. Of course, individual freedom is a great value. The Bill of Rights articulates many of the specific liberties to which each American is entitled, grounded in the belief that God is the Author of our rights. For the preservation of these rights, generations of Americans have fought and died. They are well worth cherishing.

However, when we deny that God is the One Who is the author of personal rights, those rights become the means by which an individual can himself or herself exercise God-like power. It is in this way that “personal autonomy” has been radicalized, elevated to the place our Creator reserves for Himself.

There’s really nothing new here. Attaining radical personal autonomy was the reason Eve bit into the fruit offered by Satan. “You will be like God,” he said, and our first parents bought his lie.

Ironically, by seeking to evacuate God from His role as the giver and taker of life and thereby obtain ultimate freedom, we enslave ourselves to evil. Self-worship cannot be realized without making a pact with moral squalor. This, a cult of death, realized in the act of killing an unborn person, amounts to a seizure from the Lord of all an authority He reserves for Himself alone.

“Fear not, I am the first and the last, and the living one. I died, and behold I am alive forevermore, and I have the keys of Death and Hades.” This is what Jesus told John the apostle (Revelation 1:17-18). He surrenders those keys to no one.

Yet He allows wickedness in our fallen, broken world. But only for a time. Those permitted to usurp His unique authority in the destruction of life in the womb, and those who celebrate this brutal act, merit compassion and the good news of repentance, faith, and forgiveness in Christ alone. If they do not receive it, they will find that their self-worship and its rite of death lead only to an eternal penalty from which, tragically, there will be no relief.

“The Gospel is only good news if it gets there in time,” said the late theologian Carl Henry. When it comes to the abortion cult, there is no time for Christians to lose.