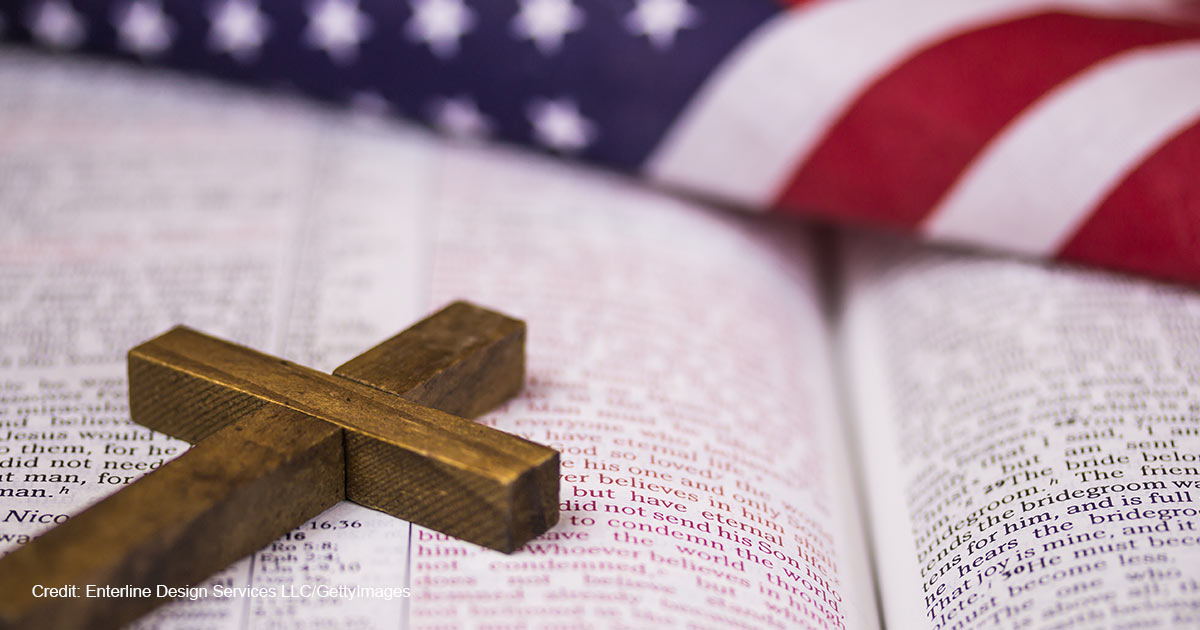 A strange development is taking place in the American political landscape. At precisely the moment the Left is sounding the alarm about the growing threat of “Christian nationalism” (see here, here, here, and here), they are increasingly employing religious arguments in support of their policy preferences.

Perhaps the most glaring example is California Governor Gavin Newsom’s (D) decision to quote Jesus in a series of billboards he placed in seven states to advertise the state’s new abortion tourism laws. Recently, California decided they will not only pay for the abortions of people who live in other states, they’ll cover travel expenses as well. They won’t pay for cancer treatments, chiropractor appointments, chronic dental problems, mammograms, adoption expenses, or the expenses associated with raising a child. Just your abortions.

The billboard quotes Jesus’s words from the gospel of Mark, “Love your neighbor as yourself. There is no greater commandment than these.” Apparently, Gavin Newsom believes that if you love people, you will help them get abortions.

Democrat Raphael Warnock, a United States Senator from Georgia who is a self-described “pro-choice pastor,” is in a close re-election campaign with former football player Herschel Walker. Like Governor Newsom, he recently invoked God in his support for abortion. “I trust women in their wisdom and their ability to sit with their own God, and if they choose, choose to sit with their pastor, to pray about that, and let their own conscience guide them,” Warnock said. “Even God gave us a choice.”

Does the fact that God gave us the ability to choose mean that he is indifferent to the choices we make? Of course not. The entire Christian gospel is built on the premise that it is necessary for all people to “repent and believe” (Mark 1:14-15). Repentance is necessary because of sin, and sin is what God calls it when we make the wrong choice. Contrary to Warnock’s suggestion, God is not pleased simply because we made a choice. God wants us to make the right choice — and there are deadly consequences if we don’t.

Newsom makes a similarly flimsy theological argument with his suggestion that the duty to love our neighbor obligates us to facilitate their abortions. The #LoveIsLove crowd would have you believe that loving someone means doing what they want you to do, but God has a different definition of love. Love does not rejoice in iniquity but rejoices in the truth (1 Cor. 13:6). That means that love does not require or even allow us to facilitate someone’s sin. We should not help someone get an abortion because they believe it will solve a problem — any more than we should help them kill their spouse for the same reason.

In addition, despite the overtly biblical language, no one has expressed concern about the threat to democracy represented by Warnock and Newsom’s mixing of religion and politics. Neither the ACLU nor the Freedom From Religion Foundation are highlighting the risk from Newsom’s decisions to use campaign funds to put Bible verses on billboards. Of course, we understand why. They know Warnock and Newsom don’t really care what the Bible says. It is understood that their occasional Bible talk is politicking. It doesn’t represent a threat to secular causes or political power, so it is unoffensive. Those who lament the danger of religion in politics don’t really object to religion in politics; religion is only dangerous if it is not helpful. If you are using religion to help them abort babies or get drag queens into schools, pray all you want — which brings us back to Christian nationalism.

It is possible to make an idol out of politics by creating a version of God that suits our political preferences. If we do this, we’re demonstrating that our politics is our real god, and our religion is just a way of justifying our politics. This is the mistake made in all cases by so-called progressives Christians, and it’s a mistake that can easily be made by conservative Christians as well. So, in conversations about Christian nationalism — however you define that — if someone is exhorting you not to make an idol out of your politics, check your heart and listen. In our overheated political climate, political idolatry is a real risk.

Still, as the non-response to Newsom and Warnock illustrates, those claiming to be concerned about the threat of Christian nationalism are not concerned that you may be falling into idolatry, they’re concerned for their political power. They take the time to misrepresent you and make you look bad because they are afraid of what you are capable of. You will hear a lot more about Christian nationalism in the future. When you do, there will be ominous music in the background, and they will prove their point by quoting people who really have fallen into the trap of political idolatry. They will imply that because you are also a Christian, you’re just like them.

The goal is to motivate their base by proving you’re a threat and to shame you into silence, fear, and retreat. It’s a trap. Don’t fall for it. If you do, they get to do whatever they want and then the whole country turns into California. Besides, there is no real risk of Christian nationalism taking over America — but even if there was, it’s not worse than the rainbow, equity, pagan nationalism they’re offering as an alternative.