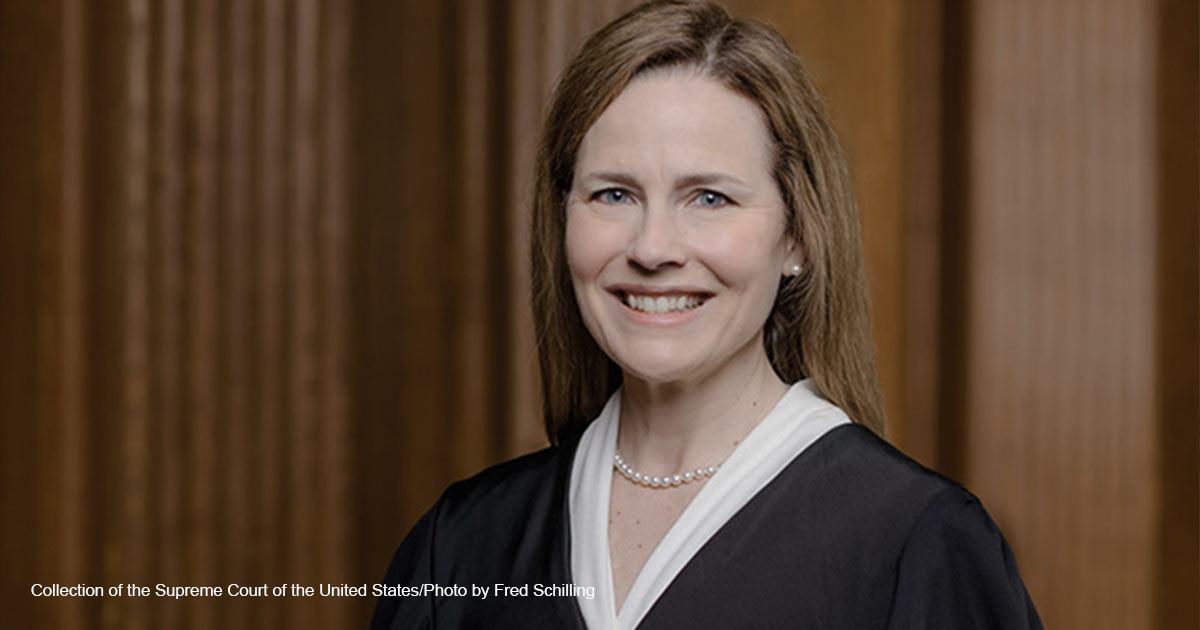 The Left’s Argument against Amy Coney Barrett Deserves Our Attention

An article about U.S. Supreme Court Justice Amy Coney Barrett — published last week by prominent British newspaper The Guardian — has been receiving a lot of attention. The article’s primary focus is Justice Barrett’s faith and an upcoming First Amendment case involving a Christian web designer. Barrett’s detractors are calling for her to recuse herself from the case on account of her association with the People of Praise, a charismatic Catholic community. Although the supposition that Barrett ought to sit out the case due to her faith is patently unconstitutional — Article VI of the U.S. Constitution prohibits religious tests for officeholders — the arguments made by The Guardian article merit further consideration.

According to The Guardian, former members of the People of Praise believe that Barrett’s membership in a theologically conservative Catholic group should disqualify her from participating in the upcoming case 303 Creative v. Elenis. The case involves Lorie Smith, a Christian web designer who has challenged a Colorado law that requires her to create messages that violate her sincerely held beliefs about marriage. The U.S. Supreme Court will hear oral arguments in the case on December 5.

In addition to Barrett’s association with the People of Praise, her opponents are also drawing attention to her service on the board of Trinity Schools, a network of private Christian schools that holds to a traditional sexual ethic. (Major media outlets discussed Barrett’s connection with Trinity during her 2020 confirmation hearings.) According to those quoted in The Guardian, Trinity’s policies on homosexuality and same-sex marriage are discriminatory, and Barrett’s service on the school’s board is yet another sign that she is biased against those who identify as LGBT.

Although The Guardian article has attracted attention in the United States, it is unlikely that the renewed focus on Barrett’s affiliation with the People of Praise will affect the upcoming case. As previously noted, Article VI of the Constitution explicitly forbids applying a religious test to officeholders in the United States. The argument against Barrett’s participation in the 303 Creative case on account of her faith must be seen for what it is — a blatant attempt to intimidate Christians and drive anyone who dissents from the moral revolution from the public square.

It is important to note that the views ascribed to the People of Praise and Trinity Schools are not novel or unique to these entities. The belief that marriage is a covenant relationship between one man and one woman is not peculiar to the People of Praise. Likewise, Trinity Schools did not invent the idea that God created two complementary sexes. The doctrines at stake here are not the views of a few isolated denominations or sects (as Barrett’s detractors would suggest). Rather, the beliefs about marriage and sexuality held by these groups represent the longstanding views of the Roman Catholic Church and, for that matter, historic Christianity.

It makes strategic sense for Barrett’s opponents to cast doubt and suspicion on a small community like the People of Praise or a network of schools like Trinity. It would be much more difficult to take on the entire Roman Catholic Church. But the long-term goal here should not be overlooked. Those who want Barrett disqualified on account of her association with the People of Praise also want to sideline anyone who persists in holding views contrary to the prevailing zeitgeist on matters related to marriage and sexuality.

Of course, the attempt to cast doubt on the impartiality of Justice Barrett is not new. For years, those leading the moral revolution and pushing the panoply of LGBTQ+ issues have sought to caricature anyone who believes in a biblical sexual ethic as outdated or bigoted. Unfortunately, it is likely that hostility toward Christians who hold to the Bible’s teachings on marriage and sexuality will increase as the culture grows more secular and the percentage of those with a biblical worldview continues to decline. Although living in such a society will surely present challenges for faithful Christians, it will inevitably present opportunities for gospel witness as the teachings of the Christian faith increasingly appear strange and bizarre to our friends and neighbors.

Finally, it is worth noting that Barrett’s Catholic faith is shared by five of her colleagues (Justices John Roberts, Clarence Thomas, Samuel Alito, Sonia Sotomayor, and Brett Kavanaugh). Neil Gorsuch (Anglican) and Ketanji Brown Jackson (Protestant) are also part of faith traditions that have historically upheld a biblical sexual ethic. Despite the religious makeup of the U.S. Supreme Court, someone would be hard-pressed to find an article alleging that Justice Sotomayor’s Catholic faith requires her to recuse herself from the upcoming 303 Creative case or another that involved the intersection of LGBT issues and religion. The reason for this inconsistent treatment lies in the fact that the cultural Left thinks that Barrett is problematic due to their perception that she takes her faith seriously and actually believes her church’s teachings on contested issues.

While Justice Barrett is in the crosshairs of the moral revolutionaries today, it will be someone else tomorrow. Those of us who care about free speech and the ability to live out our faith ought to pay careful attention to the arguments levelled against Barrett. Likely, they will be the ones used against us soon.