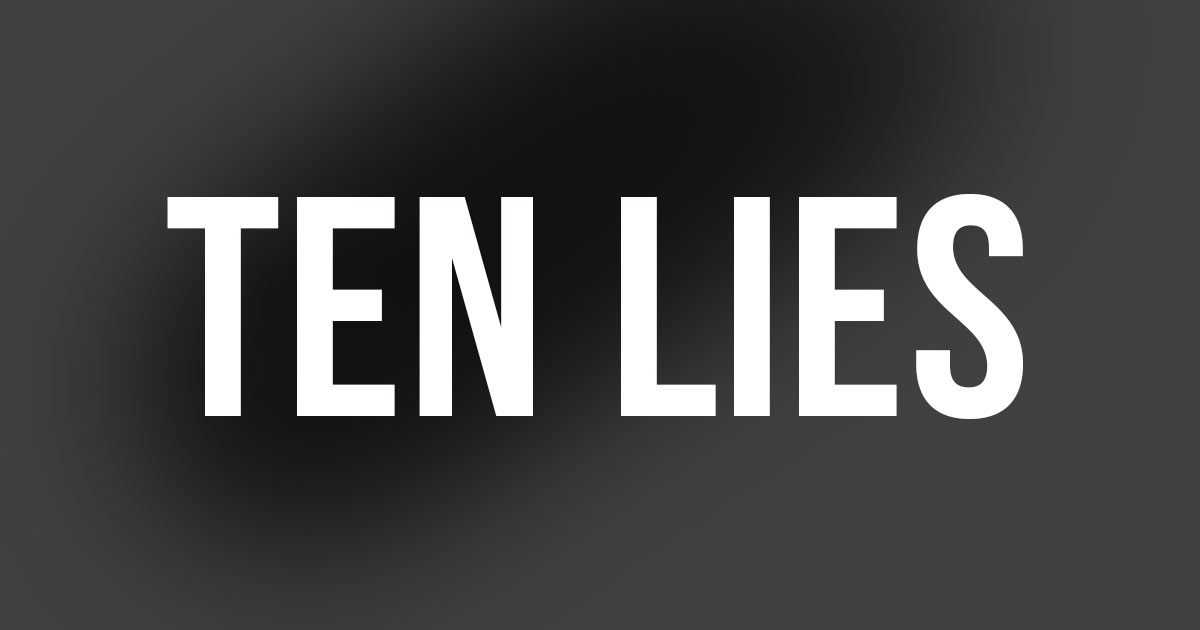 In 2021, the American Worldview Inventory released data analyzing the top 10 most prevalent “seductive unbiblical ideas” embraced by American adults. With contemporary culture becoming more secular, belief systems divergent from Scripture are not surprising. What is surprising, however, is that even among adults who have a biblical worldview, 6% harbor many secular beliefs as part of their personal philosophy.

“According to researcher George Barna’s methodology, someone must score 80% on beliefs and behaviors to be categorized as someone with a biblical worldview,” the director of Center for Biblical Worldview, David Closson, told The Washington Stand. “However, the pervasiveness of some of these faulty beliefs means that there are some Christians with a biblical worldview who nonetheless hold a few beliefs that are contrary to the truth revealed in God’s Word.”

Closson emphasized that for Christians to counter “widespread” faulty beliefs they must know what the Bible says on these issues.

Here are the nation’s 10 most prevalent “seductive unbiblical ideas” compared to what the Bible says:

The survey, with more than 2,000 participants, found that 62% believe the post-modern idea that “having faith matters more than what faith you have.”

Closson shared that in John 14:6, Jesus said, “I am the way, and the truth, and the life. No one comes to the Father except through me.”

“The Bible unashamedly teaches that the Judeo-Christian faith is the only valid spiritual pathway,” explained Barna, who led the research team at Arizona Christian University.

The second prevalent lie, which is similar to the first, is common among people attending Catholic or mainline Protestant churches. In Acts 4:12 Paul wrote, “Salvation is found in no one else, for there is no other name under heaven given to mankind by which we must be saved.”

“Some criticize Christianity for being an exclusive faith — the ‘one true faith’ — as arrogant and elitist,” said Barna. “But the Bible notes that people are called by their Creator God to love, worship, and serve only Him and that all other deities are merely idols. Jesus Christ is revealed as the living God with whom a grace-based relationship is the only way to eternal peace with God.”

Fifty-seven percent of Americans believe in karma. The Eastern notion of karma which says that actions in this life will be rewarded or punished in a future life is not grounded in biblical teaching. Of course, the Bible does teach that our actions will have consequences. But the only “action” that affects our future state is whether we respond or not to the gospel.

Closson emphasized that this should not be confused with Jesus’s teaching on “You reap what you sow.”

“What’s different, though, with this whole idea of karma, is that what you do in this world will affect some sort of reincarnated version of yourself in another life,” explained Closson. “And so, again, as Christians, we believe works don’t get us to heaven. The only thing that gets us to heaven is that relationship with Jesus Christ.”

He shared that in Hebrews 9:27, it says, “And just as it is appointed for man to die once, and after that comes judgment.”

Sixty-seven percent of Americans say that there’s no way to know something that is objectively right or wrong.

On a segment of “Washington Watch,” Closson pointed out that this false belief is linked to post-modernism.

“In the age of modernism in the 18th century, they believed in science and reason and technology to usher in this whole new era of human flourishing. Post-modernism throws that overboard and says, ‘Well, actually, there is no truth. There is no way to know if your truth is better than my truth.’ And so that’s where this whole idea of there’s no absolute truth [originates], there’s no objective, right, there’s no objective wrong.”

But Closson urged Christians to stand on the Word of God as their foundation for absolute truth.

“Most people are absolutely committed to the idea that morality is individualistic and that there is no outside standard to which people will ultimately be held accountable,” Closson insisted.

However, the Bible teaches in Matthew 25:31-46 that there will be a judgment and that people will be held accountable for how they lived their lives.

“Most importantly, people are going to be held accountable for what they did with the gospel. Did they repent of their sins and turn in faith to Christ? Jesus talks a lot about judgment and the consequences of sin. Unfortunately, most people, including many professing Christians, do not take the warning passages of Scripture seriously.”

The researchers at Arizona Christian University found that 69% of Christians believe the seductive notion that everyone is inherently good. But Closson points out that in Romans 3:23, Paul states, “For all have sinned and fall short of the glory of God.”

“In this verse, Paul makes it abundantly clear that humanity has fallen,” Closson emphasized. “Notice the strong language he uses. He describes the Christians as ‘children of wrath’ (Ephesians 2:1-3) before they came to know Christ.”

Closson explained that contrary to popular belief “success is determined by faithfulness to God.”

In Matthew 25:14-30, Jesus tells the disciples the parable of the talents. The servants who multiplied the talents their master had given them were blessed with more, whereas the one who failed to steward his talent was condemned and left without.

“The parable of the talents makes the point that God expects people to us whatever He gives them faithfully,” said Closson.

In a culture that is increasingly self-centered, Closson encourages Christians to focus on serving God and reap the benefits.

Success is determined by faithfulness to God. Matthew 25:14-30, which tells the parable of the talents, makes the point that God expects people to use whatever He gives them faithfully.

In his “Washington Watch” interview, Closson was not surprised that 74% of Americans believe sexual relations apart from marriage is morally acceptable.

“Thankfully, those who are Christians were very low in this poll. But outside the church, this is just the natural morality that you find,” he noted.

To find an in-depth explanation of these scriptures, visit his publication, Biblical Principles for Human Sexuality.

The American Worldview Inventory identified that 44% of born-again Christians do not accept the idea that people are born into sin.

But in Ephesians 2:1-3, Paul writes, “And you were dead in the trespasses and sins in which you once walked, following the course of this world, following the prince of the power of the air, the spirit that is now at work in the sons of disobedience — among whom we all once lived in the passions of our flesh, carrying out the desires of the body and the mind, and were by nature children of wrath, like the rest of mankind.”

“The fact that many professing Christians persist in thinking the Bible doesn’t teach that people are born into sin is evidence that they do not really know the Bible,” said Closson. “In my view, biblical illiteracy is not only rampant in the culture, but also in many churches.”

Although this is a prevalent idea, the Bible instructs Christians in 1 Corinthians 10:31 saying, “So whether you eat or drink or whatever you do, do it all for the glory of God.”

“This is a wonderful verse to understand the purpose of life,” Closson shared. “God’s glory, not personal wealth, ought to be the goal of every Christian. Personal wealth should be seen as a gift from God that ought to be stewarded and leveraged for His glory.”

Family Research Council continues to partner with Barna to release helpful resources for churches and individuals through the Center for Biblical Worldview. Closson recommends signing up for the monthly email at FRC.org/WorldviewEmail to get regular worldview assessments. But beyond resources, he recommends, “The only way to ensure that you have a biblical worldview is by knowing, believing, and living out God’s Word.”