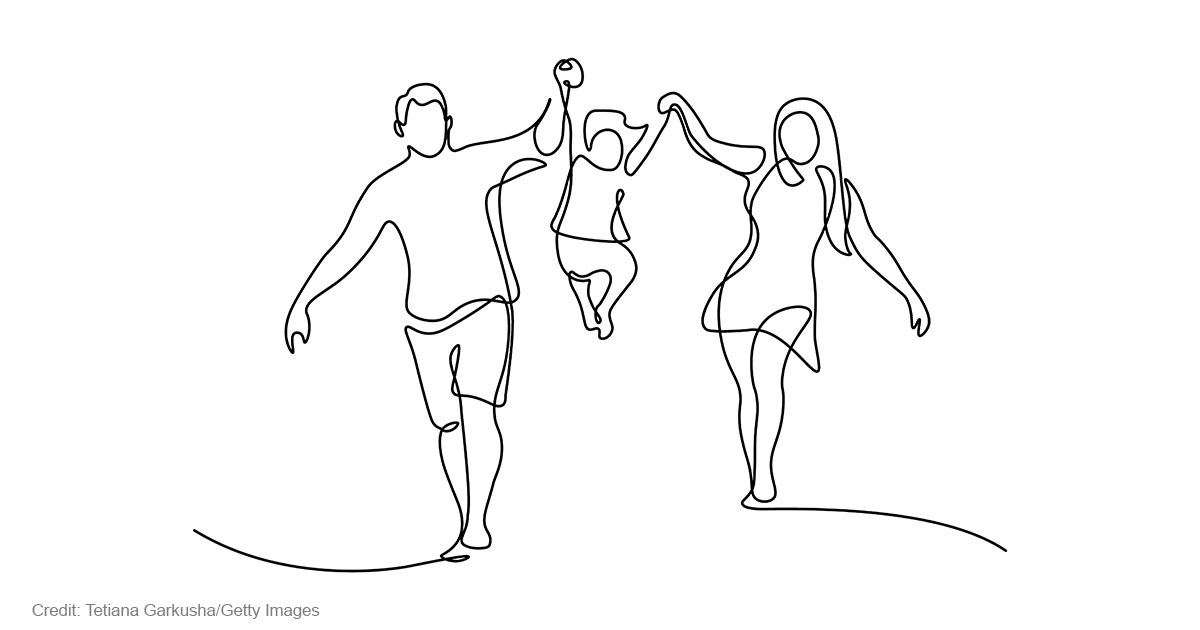 This Is a Child

In 1961, the Green Bay Packers squandered a fourth-quarter lead and lost the NFL championship. The following year the players gathered at training camp, demoralized but ready to master new strategies and plays. Instead, their coach, Vince Lombardi, walked into the locker room holding up a pigskin and began, “Gentlemen, this is a football.”

Something had gone very wrong for his team to have lost what should’ve been an easy victory. Lombardi concluded that his players had forgotten the fundamentals of the game. So that season he started from scratch, as if these 38 elite players were blank slates, and rebuilt the team’s knowledge of the basics — how to block, tackle, pass — from the ground up.

Similarly, the Western world lost what should’ve been an obvious win: the battle of marriage. We fumbled because we took our eyes off the ball and got distracted by religious liberty questions, the self-interest of adults, and accusations of being on the wrong side of history.

Just like the Packers of 1961, conservatives must recover the fundamentals of the family. So, let’s start with the basics.

“Ladies and gentlemen, this is a child.”

The loss of a child’s father affects children at a cellular level. Fatherless boys especially have shorter telomeres, the end caps of their chromosomes. Losing a father to death or abandonment literally shortens this child’s lifespan. Daughters raised apart from their biological father begin menstruating, on average, one year earlier than their girlfriends being raised by their own fathers. The loss of a father alters children’s physical bodies.

This is a child. As she grows, she deserves to be safe and loved. After decades of research, social scientists on the Left and Right have discovered the conditions that make it most likely she will be, namely being raised by the one man and one woman who gave her life. The data reveal that biological parents advantage children in ways that unrelated adults do not.

Statistically, stepparents invest less time, money, and care into children’s upbringing. In blended families, biological children are 15% more likely to have regular medical checkups, 22% more likely to be buckled in the car, have 5% more money spent on their food, and are more likely to attend college. Stepparents save less money for children’s education and bequeath less to them when they die.

Thankfully there are heroic stepparents who step up to fill the gap of a negligent biological parent. They deserve our recognition and support. But overall, the presence of an unrelated adult in a child’s home diminishes child outcomes. That is especially true when the unrelated adult is a man. If this child is living with her mother’s cohabiting boyfriend, she is 11 times more likely to be sexually, physically, or emotionally abused.

Researchers Martin Daly and Margot Wilson found children were 120 times more likely to be beaten to death by a mother’s boyfriend or a step-father than their own dad. Sociologist Bradford Wilcox notes, “One of the most dangerous places for a child in America to find himself in is a home that includes an unrelated male.” The risk that unrelated adults pose to children is the very reason why adoptive parents like me were subjected to rigorous screenings and background checks prior to having a child placed in our home. Biology affords a level of protection to this child that a romantic interest in her mother or father simply does not.

This is a child. The man and woman who made this child are the safest, most invested adults in her life. Being raised by those two adults is her best shot at being safe and loved.

The man and woman who made her are also the only two humans on the planet that provide her with something she seeks: her biological identity. Children struggle to answer the question “Who am I?” when they don’t know “Whose am I?”

Fifty years ago, the majority of adoptions were closed, with no identifying information about or contact with the child’s first family. Today, 95% of adoptions have some degree of openness. That’s because both adoptees and social workers report that children fare better when they have as much contact with their first family as possible, even if they cannot be raised by them.

Some children are intentionally severed from a biological parent at conception via sperm and egg donation. Far from regarding these donors as strangers who don’t matter because “love makes a family,” these children often embark on protracted internet searches or genetic investigations via 23 and Me to find their missing parent or dozens of half siblings.

The largest study on donor-conceived children found they experience “profound struggles with their origins and identities.” One survey of sperm and egg donor children found 64% agree that “My donor is half of who I am.” Eighty-one percent often wondered what personality traits, skills, and physical similarities they shared with their donor.

It seems that even when children are raised by a loving mother and father, they still long to be known by the one man and one woman who gave them life.

This is a child. If she is raised by the two adults who gave her life, she will also developmentally benefit from the perfect gender balance in her home. Mom’s higher oxytocin levels optimize nurturing and bonding in her first three years. Dad’s increased testosterone transforms a laundry basket into a roller coaster ride. Her fine motor skills will be honed while chopping carrots with mom, her gross motor skills while racing down the street with dad.

Her female parent naturally simplifies her language when talking to this child: “did you get a boo-boo?” Her male parent expands her cognitive development by talking to her like he talks to everyone else: “dang baby, that’s a gnarly road rash.” One parent’s default attitude is safety — “be careful on the monkey bars!” The other naturally pushes her limits: “you can make it next time if you get a running start.”

This is a child. The one man and woman who made her also give her the distinct love she hungers for. Kids don’t just want to be loved in the abstract. They seek both maternal love and paternal love. Take it from the kids who had two moms or two dads.

Theodore shares: “From an early age I found myself drawn to my friends’ fathers. I think my [lesbian] parents knew this was necessary for me. My best friend’s dad also probably recognized the role he was fulfilling in my life and did so willingly, something I’m forever grateful for.”

Samantha remembers, “My 5-year-old brain could not understand why I didn’t have the mom that I desperately wanted. I felt the loss. I felt the hole. As I grew, I tried to fill that hole with aunts, my dads’ lesbian friends and teachers. I craved a mother’s love even though I was well-loved by my two gay dads.”

The Rights of the Voiceless

There is one delivery system every society throughout human history has discovered, affirmed, and promoted to secure this child’s right to that man and woman all day, every day, for life. That system is marriage. When we understand that “this is a child,” the definition of marriage becomes a matter of justice. And redefining marriage to exclude a mother or father is an act of injustice.

This is a child. The opinions of five Supreme Court justices cannot change her. Dystopic processes of creating children in laboratories cannot change her. Endlessly repeating “if the adults are happy, the kids will be happy,” will not change her. Our laws, our technology, and our culture will either recognize and respect who she is and what she needs, or will victimize her. Those are the only two options.

This is a child. She’s not an item to be cut and pasted into any and every adult relationship. She is not an object of rights, she is a subject of rights. Respecting her rights requires that all adults — single, married, gay, straight, fertile, and infertile — do hard things on her behalf. Because the only alternative is to insist that she do hard things for them. That’s an injustice. A just society does not force the weak to sacrifice for the strong.

This is a child. If she loses her mother and father due to abuse, neglect, or abandonment, adults do not have a right to adopt her. Rather, she has a right to be adopted. And whenever possible, she deserves to be adopted into a family where she can benefit from the maternal and paternal love that will maximize her development and satisfy her heart.

This is a child. And in matters of marriage and family, she deserves your empathy. Not adults. It is the risk and instability of a revolving door of adults to which she’ll be subjected that should be at the forefront of your mind when reading that New York Times op-ed promoting open non-monogamy. It is this child, not just the florist or the baker, who needs defending when rejecting the laughably named Respect for Marriage Act. It’s this child’s mother-hunger and identity struggles that should govern your response when your favorite classically liberal podcaster creates an intentionally motherless surrogate baby, or two. Because it will always be this child whose rights and well-being are sacrificed on the altar of Modern Family.

This is a child. She does not blog. She can’t submit amicus briefs. She cannot lobby her congressman. She cannot hire lawyers. She cannot speak at conferences. She cannot defend her own rights. This child is completely dependent on adults coming to her defense. And speaking up on her behalf.

What happened to the 1961 Green Bay Packers? They became the best in the league at the tasks everyone else took for granted. Six months after Lombardi’s “this is a football” speech, the Packers blew out the New York Giants 37-0 in the NFL championship.

Ladies and gentlemen, if you always remember that “this is a child,” you’ll never lose a marriage and family battle again.

This article originally appeared in The American Mind.

Katy Faust is Founder & Director of Them Before Us, an organization that strives to put children before adults in every conversation about marriage and family.