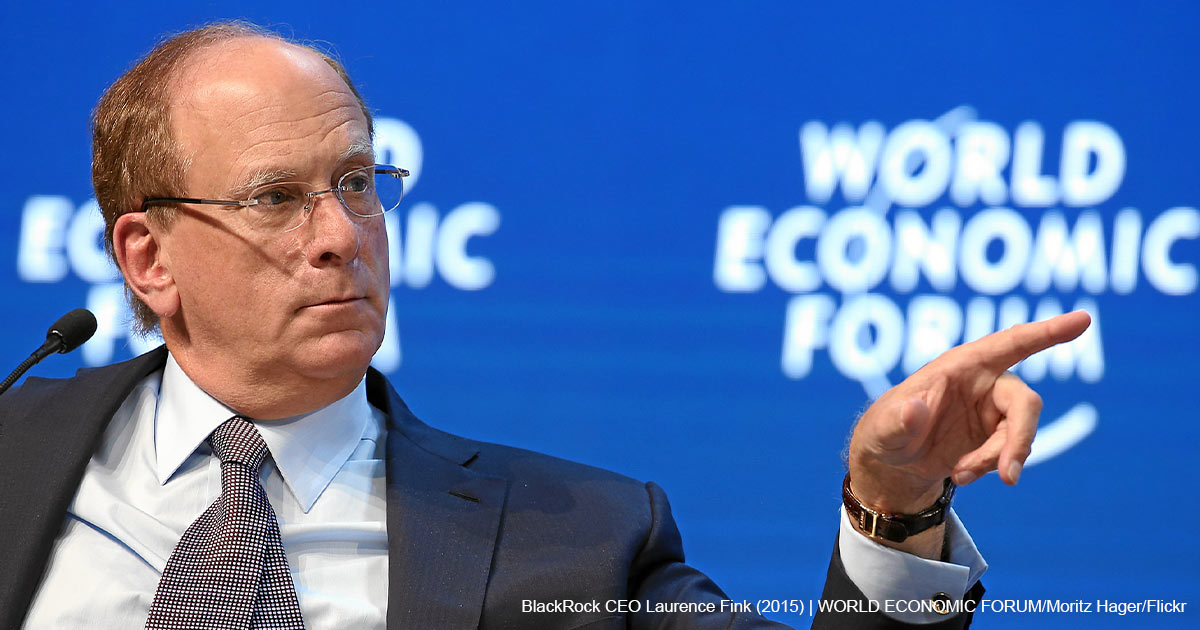 It’s no picnic for anyone in the financial sector right now, but for Larry Fink, CEO of the woke bully BlackRock, times have never been tougher. His years-long joyride — using investors’ money to advance his pet political causes — has come to a screeching halt. Red state conservatives are angry, they’re motivated, and for the first time in this David and Goliath battle for corporate America, they’re loading their slings.

The bad news probably felt like a one-off in January when West Virginia State Treasurer Riley Moore (R) announced that his state was dropping BlackRock as an investment fund. “I have a duty to ensure that taxpayer dollars are managed in a responsible, financially sound fashion which reflects the best interests of our state and country, and I believe doing business with BlackRock runs contrary to that duty.”

Turns out, that was just the starting gun to a conservative stampede. In a matter of months, Fink and his empire were bleeding clients — and not just small portfolio businesses but major statewide retirement plans. Texas, Louisiana, and South Carolina all took their money and walked, hauling off more than $1 billion dollars in assets to reinvest with firms that respected their values.

On Tuesday, the hits kept coming. Missouri State Treasurer Scott Fitzpatrick (R) said he’d tried to work with BlackRock — putting in a formal request this past June that the company “abstain from voting proxies on behalf of [the state’s] plan.” In other words, don’t use our money to advance your causes. In a telling move, Fink refused. So Fitzpatrick, with the backing of the trustees of Missouri State Employees’ Retirement System (MOSERS), yanked the state’s pension money — worth $500 million dollars — and moved the dollars to a local firm.

“This is the right thing to do for Missouri state employees who rely on assets managed by MOSERS for their retirement. Fiduciary duty must remain the top priority for investment managers — a duty some of them have abdicated in favor of forcing a left-wing social and political agenda that has failed to succeed legislatively, on publicly traded companies,” Fitzpatrick declared. “We should not allow asset managers such as BlackRock, who have demonstrated that they will prioritize advancing a woke political agenda above the financial interests of their customers, to continue speaking on behalf of the state of Missouri. … As Treasurer… I will continue fighting for Missourians to stop their tax dollars from being weaponized against them.”

As the dominos fall, so does BlackRock’s stock. Last week, experts at Barron’s officially downgraded Fink’s shares from “buy” to “neutral” over concerns that his ESG obsession was jeopardizing the company’s profits. Analyst Brennan Hawken “slashed projections” from $700 to $585, hinting at the rocky road ahead for anyone prioritizing woke politics over actual earnings. That should’ve been a lesson already learned from BlackRock’s third quarter, which lost a whopping 16% in income.

For his part, Fink stubbornly denies that his political fixation is hurting anyone. In his alternative reality, “Our participation in these [woke] initiatives is entirely consistent with our fiduciary obligations.” Or so his managing director wrote to several state attorneys general who hinted that BlackRock might actually be breaking the law by using taxpayer dollars to push a one-sided agenda. Fink’s staff also claimed that BlackRock has been “an industry leader in offering clients choice in how proxies are voted.” That’s interesting, since the company flat-out rejected Missouri’s request to stay neutral. If that’s “voting power,” you could’ve fooled Scott Fitzpatrick.

The reality is, The Political Forum’s Stephen Soukup argues, “Larry Fink miscalculated wildly — on several fronts. Maybe the BlackRock board should do its job and protect the company by finding a more sensible leader.”

In the meantime, Americans are getting a good look at the weapons they have in their local finance officers. That should be wake-up call to voters heading into November, when 26 state treasurers will be elected across Alabama, Arizona, Arkansas, California, Colorado, Connecticut, Delaware, Florida, Idaho, Illinois, Indiana, Iowa, Kansas, Massachusetts, Nebraska, Nevada, New Mexico, Ohio, Oklahoma, Rhode Island, South Carolina, South Dakota, Utah, Vermont, Wisconsin, and Wyoming.

In the war over corporate America, it isn’t just everyday consumers and investors who hold the power. State officials — even in obscure or sometimes overlooked jobs — can bring woke, seemingly invincible companies like BlackRock to their knees. That’s especially important now, in this avalanche of corporate pushback.

As FRC Action Director Matt Carpenter pointed out, the majority of states (36) let the people decide who oversees the state’s accounts, contracts, and other investments — and we should be very mindful, as voters, who we’re hiring to do those jobs.

“We don’t often think of the state as investing taxpayer money, but it’s actually a big part of what state governments do,” he explained. “States oversee billions of dollars in retirement funds, lines of credit, and more.”

“These positions like state treasurer or chief financial officer," Carpenter went on, "are more important than ever now that big Wall Street firms have gone all-in on radical leftist ideals like critical race theory, gender ideology, abortion extremism, open borders, enthusiastic support for the Chinese Communist Party, and even open hostility to American industries — like domestic oil and gas. It’s no wonder states like Missouri, Louisiana, and others are divesting hundreds of millions of taxpayer dollars out of woke corporations like BlackRock. …They keep doubling down on failed priorities like ESG at a time when they can probably afford it least.”

Ironically, Fink, who admitted the losses have been “painful,” can’t even mollify the Left with his fanaticism. New York’s zealot comptroller recently accused BlackRock of not focusing enough on climate change. “I’m now being attacked equally by the Left and the Right,” the CEO shrugged, “so I’m doing something right, I hope.”

At the end of the day, there’s only one way to please everyone — and that’s neutrality. If Larry Fink isn’t losing enough money to grasp that, elect someone who will do something about it.