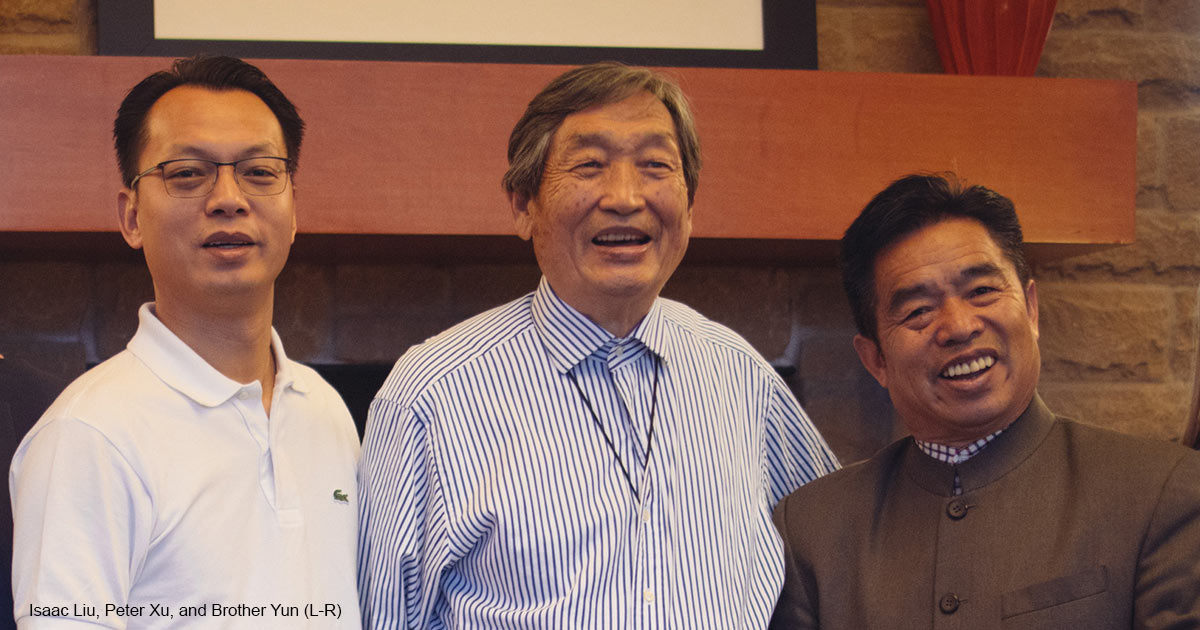 Voices of the Persecuted Church (Part 1): The Chinese Underground Church

Have you ever wondered what it would be like living in a society that blamed you for their problems? What if being a Christian cost something — like your popularity, your job, your rights, your family, or your life? This is the stark reality of many Christians overseas, particularly in China, and this type of persecution is foreign to U.S. Christians.

In America, Christians attend worship services without any thought of facing judgment, slander, or persecution. While there is evidence that American society and legislation is becoming more hostile to Christianity, believers by and large do not face anywhere near the same level of threats or persecution that their Christian brothers and sisters see every day in many eastern countries.

Ironically (or perhaps consequently), a nation with arguably the most freedom and prosperity in the world is seeing a steady decline in Christianity. Pew Research reported that 65% of American adults identified as Christian in 2019 (a decrease of 12 percentage points since 2009), and 76% of Baby Boomers identify as Christian while only 49% of Millennials identify as Christian.

Secularization has overtaken much of Europe as well. In Western Europe, where many identify as Christian because of historical religious tradition, most Western Europeans are non-practicing and reject the God described by the Bible. In 1910, 66% of the world’s Christians lived in Europe, but in 2010 Europe made up only 26% of all Christians.

While Christianity is declining in the West, it continues to grow in the East. The percentage of Christians living in Africa and Asia grew from 6% in 1910 to 37% in 2010 and is projected to reach 50% by 2050.

In China today, some experts believe there are 130 to 150 million Christians growing at a rate of 30,000 new believers a day according to Dr. Eugene Bach, co-author of “The Underground Church.”

Bach has been a Chinese missionary since 2000 and is part of an organization called Back to Jerusalem (BTJ), a Chinese-based Christian mission organization dedicated to evangelizing the nations between China and Israel. BTJ trains and sends Chinese missionaries to evangelize the primarily Hindu, Buddhist, or Muslim nations in the “10/40 window” where 90% of unreached people groups in the world are located. The BTJ vision began in the 1920s, but the first team of missionaries from China wasn’t sent until 2000. Since then, China has sent thousands of missionaries to many countries in the in 10/40 window.

BTJ recently hosted its first Voices of the Persecuted Church conference and invited several missionaries from some of the most heavily persecuted nations in the world: North Korea, Iran, Sudan, and China. According to the Open Doors World Watch List, these countries rank #2, #9, #13, and #17, respectively. These missionaries shared their stories of God’s grace through tremendous trials, and they revealed how God is using the faithfulness of the persecuted church to expand the kingdom.

I attended this conference in October 2022 and will share the stories of the speakers in a two-part series. Part one of this series will unveil the circumstances of Christians in China and will focus on the stories of two missionaries from China; part two will focus on North Korea and the story of one missionary who has spent her life serving the citizens of North Korea within the country and refugees fleeing the country.

A Brief History — Christianity in China

Christianity has faced many challenges in China since Mao Zedong came to power in 1949. Most Christians in China meet illegally in the Chinese House Church, a vast network of underground churches. Before the rise of the Chinese House Church movement, the Chinese Communist Party (CCP) formed a state-recognized church, the Three-Self Patriotic Movement (TSPM). Like many tyrannical regimes, the CCP portrayed TSPM as an opportunity to foster patriotism, fight imperialism, and promote freedom of religion. Many Christians optimistically bought into this message, and some of the key tenets of communism appeared to align with Christian values — fostering community, helping the poor, and fighting greed. However, after cutting through the propaganda and examining some of TSPM’s requirements, the true colors of communism bleed through the mirage of rhetoric.

In TSPM, “Christian believers must strictly abide by all the laws, regulations, and policies of the Communist Party and the State and strive to be patriotic and law-abiding citizens.” To be “patriotic and law-abiding citizens,” Christians “must comply with the government’s labor codes and strive to contribute to the development of the ‘Four Modernizations’ established by the Communist Party. When scheduled religious activities are in conflict with production and work schedules, the economic activities must take priority” (emphasis added). Additionally, “no unauthorized meeting points are allowed,” and Christians cannot “persuade and force others to believe in Christianity,” “brainwash teenagers under 18 with religious beliefs,” or “bring children under 18 to religious activities.”

The prohibition on evangelism continues. Christians cannot “preach their religion outside the church building and specific places which have been designated for religious activities,” nor can they “receive self-proclaimed evangelists into their homes, churches or meeting points.” There are also additional codes — which are typically not written but still enforced by the government — that prohibit baptisms, formal or informal Bible studies, praying for healing, and teachings about the virgin birth, the resurrection of Christ, and the second coming of Christ.

The CCP hunts down Christians who fail to comply with these regulations and gives them two choices: deny Christ by swearing allegiance to the CCP, or refuse to recant and face torture, imprisonment, or execution. For those who choose the former, the CCP rewards them with leadership positions in TSPM and goads them to spy on Christians in the underground churches to reveal key details about their leaders, meetings, and members. This has created deep animosity and distrust between the Chinese House Church and TSPM.

“Do Not Be Afraid; Jesus Loves You” — Brother Yun

One of the speakers at the conference, Brother Yun, author of the 2002 autobiography “The Heavenly Man,” shared his story of overcoming the brutality of the CCP. Yun was born in China’s Henan Province in the late 1950s and grew up during Mao’s Great Leap Forward, a time of famine, starvation, and intense religious persecution. After God miraculously healed his father of cancer, he surrendered his life to God and hungered to know more about Jesus.

At the time, Bibles were nearly impossible to find in China. Mao’s Little Red Book became the new religious text, and anyone who possessed a Bible would face severe punishment from the government. After listening to the advice of a pastor, Yun prayed and fasted for months, pleading with God to bring him a Bible. After 100 days, Yun received a vision of two men pulling a Bible out of a bag of fresh bread and giving him this precious gift, and that same day the same two men came to his home and gifted him a Bible.

Now armed with the Word of God, Yun began memorizing a chapter from the New Testament every day, and eventually he received another vision to preach the gospel to the south and west of his village. This was the beginning of his heavenly call to evangelize the nations. He has faced tremendous suffering and persecution for his commitment to the Great Commission, and he has numerous stories of God’s miraculous provision in his life.

Like many of the speakers from the conference, Yun emphasized the simple yet profound truth — knowing that God loves you with a perfect, everlasting love which casts out fear (1 John 4:18), and this love enabled Yun to conquer some of the most painful and terrifying situations — imprisonment, torture, separation from family, weeks without food, and intense hatred and ridicule.

He also shared what it means to be called by God. “If there’s a calling on your life, you cannot easily die,” Yun said. Toward the beginning of Yun’s ministry, his mother prophesied that he would not be a martyr for Christ but rather a living sacrifice, and this has proven quite true after nearly 50 years of ministry.

Yun emphasized that living for the Lord is far more important than dying for him. While all Christians must be ready to die for the sake of Christ and the gospel, Christ’s call to die daily to ourselves is far more challenging. “To die is very easy,” said Brother Yun. “To deny Christ is very easy. But to live for Christ day by day until the last day is very difficult.”

Brother Yun’s son, Pastor Isaac Liu, author of “Son of the Underground,” shared his story at the conference as well. When Yun was in prison, he and his wife prayed for a God-fearing son. When Liu’s mother became pregnant, the Chinese government ordered her to have an abortion because of her husband’s status as an enemy of the state. Just days before her scheduled abortion, she gave birth to a premature baby weighing less than three pounds.

Liu grew up in his father’s poor rural village, and he saw his father for the first time when he was four years old. His father charged him to follow Christ faithfully, and Liu was baptized at seven years old. He began is walk with Christ with baptism in a frozen lake late at night in the middle of winter. The church often held baptisms this way to hide illegal religious activity from the Chinese government.

At age eight, he began memorizing one chapter of the Bible each day just like his father, and at age 11, he received a vision from God and began sharing the gospel to the surrounding villages. At age 18, he moved to Germany to start the All Nations Church where he currently serves as a pastor.

As the son of a missionary, Isaac had a direct calling on his life. He grew up with the expectation of serving God, and he didn’t always welcome that calling. After turning 13, he prayed not to become a preacher because of the many hardships he faced due to his family’s commitment to Christ. His father and mother were imprisoned many times, he went to 11 different schools in 10 years to flee persecution, and he grew up in poverty and isolation — all because of his parents’ calling to serve God. He grew bitter toward God and began to doubt God’s goodness and power.

However, he held to the word of God as a teenager, and eventually God won the battle in Liu’s heart. He compared himself to Jonah and how God used an unwilling prophet and a terrible sermon to turn the hearts of many to repentance and faith. Liu shared that like Jeremiah, we may have many excuses for why we’re inadequate to serve the Lord, but the Lord is simply looking for faithful servants who will simply trust in his power and obey his commands.

“We have millions of excuses,” said Liu, “but we must just obey and trust the Lord.”

“Wine That Is Pleasing to the Winemaker” — Eugene Bach

Bach also spoke at the conference and compared the Chinese persecuted church to a Napa Valley vineyard. Bach explained that to make the best tasting wine, the winemaker must restrict the vine’s access to water, forcing its roots to grow deep into the soil to obtain more water and nutrients. “Lazy grapes,” the large, plump, bland grapes sold at grocery stores, grow on vines that have been overwatered, and while these grapes look the most appealing, they lack flavor and nutrients.

As many of the speakers emphasized, suffering is a gift from God. It is the purifying furnace that purges the dross from the precious gold (1 Peter 1:3-9). It is the pruning of the vine that yields a more bountiful harvest (John 15:1-11), and it is an instrument that molds us into the humble, gentle, and compassionate image of Christ (Philippians 3:7-11). Suffering is a painful and undesirable reality of this world, but perhaps it is the bitter medicine for a Western church diagnosed with a lethal case of secularism.