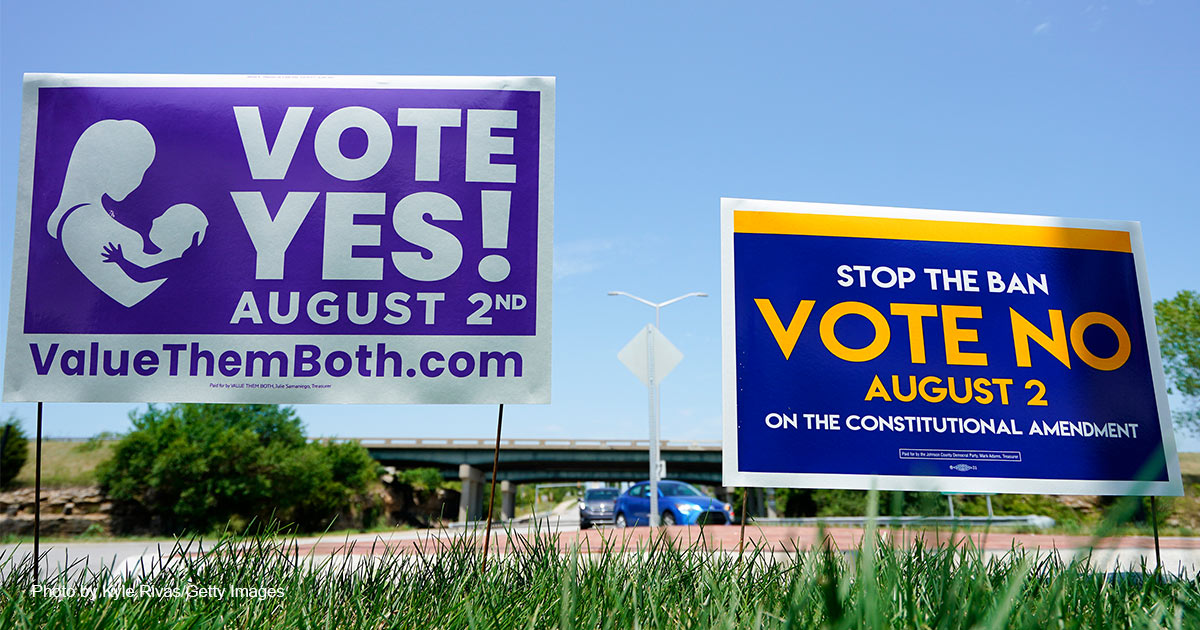 The pro-life cause just experienced its first setback at the ballot box since the Supreme Court overturned Roe v. Wade.

Voters in Kansas defeated the “Value Them Both” amendment (or Amendment 2), which would have clarified that the state constitution does not contain an unalienable “right” to abortion. The amendment became necessary after the Kansas Supreme Court ruled in 2019 that the state’s constitutional right to “life” actually conferred the right to have an abortion.

With 63% of the statewide vote total in, Kansans rejected the amendment nearly two-to-one. The referendum’s results continued to trickle in as media called the election a defeat. The lopsided vote followed a prolonged campaign of lies and deception about the measure. Opponents said the amendment would “remove” the right to abortion from the Kansas state constitution and “ban all abortions” statewide.

In reality, the state constitution contains no such right, and the amendment would not enact any pro-life protection by itself.

On April 26, 2019, the Kansas Supreme Court prevented the state from barring a second-trimester abortion technique conventionally known as dismemberment abortion (technically called dilation and evacuation, or D&E, abortion). The justices ruled the state’s ban on dismembering children up to six months’ gestation violated Section 1 of the Kansas Constitution Bill of Rights, which states: “All men are possessed of equal and inalienable natural rights, among which are life, liberty, and the pursuit of happiness.” With the fall of Roe, abortion activists have quickly recalibrated their strategy to prod judicial activists in the states into following Kansas’s lead and declaring that their state constitutions contain a newfound right to abortion.

Amendment 2 sought to override the court’s decree. “Because Kansans value both women and children, the constitution of the state of Kansas does not require government funding of abortion and does not create or secure a right to abortion,” the amendment stated. “To the extent permitted by the constitution of the United States, the people, through their elected state representatives and state senators, may pass laws regarding abortion, including, but not limited to, laws that account for circumstances of pregnancy resulting from rape or incest, or circumstances of necessity to save the life of the mother.”

The ballot noted that, voting against the amendment “would leave in place the newly discovered right to abortion first recognized in 2019.” The amendment did not ban a single abortion; just weeks after the Dobbs decision overturned Roe v. Wade, the “Value Them Both” amendment would have reversed their own state’s judicial activism — a cause that won supporters nationwide.

“I urge all my fellow Kansans to hit the ballot box today and vote ‘YES’ on the Value Them Both Amendment,” wrote former Secretary of State Mike Pompeo. “The Kansas Supreme Court tried to take away your right to restrict abortion by judicial fiat. Don't let it - vote YES, restore your democratic right, and protect the unborn!”

The Kansas loss compounds the sting of temporary delays and setbacks in other states over the last few days. West Virginia appeared poised to pass a pro-life law through the state legislature, after Governor Jim Justice (R) called a special legislative session to address the issue. However, lawmakers removed a 3-10 year prison sentence from the legislation, then left Charleston last Friday without passing the bill. The same day, Massachusetts Governor Charlie Baker (R) signed a measure expanding abortion and requiring taxpayers to fund the procedure through the state’s Medicaid program, MassHealth.