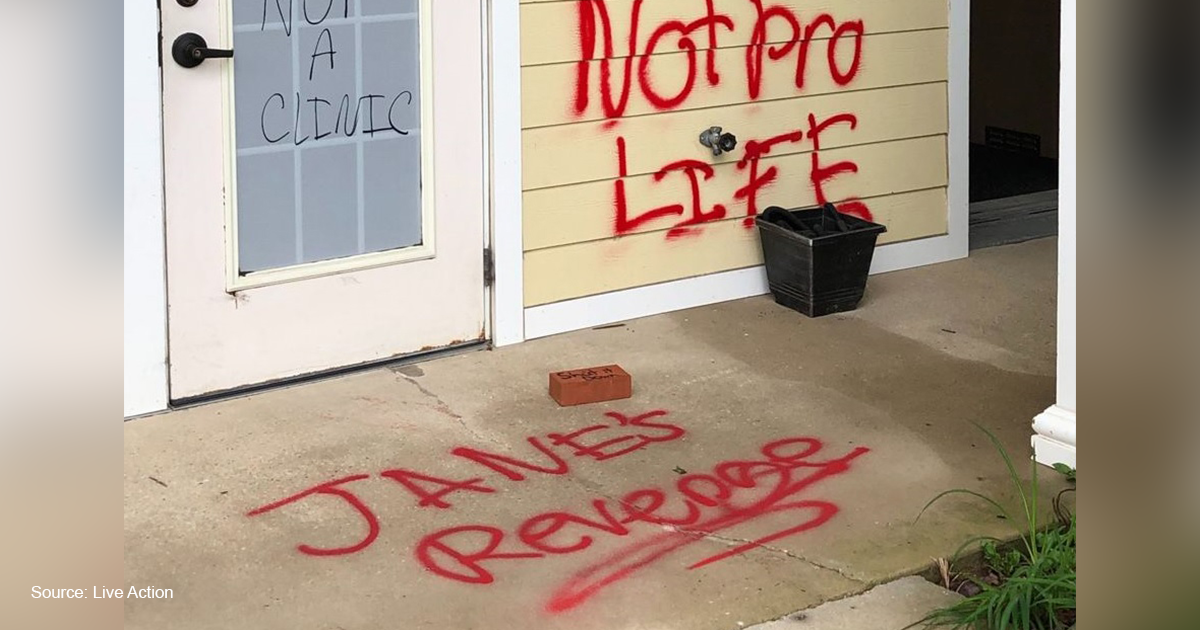 As the number of attacks on pro-life groups and individuals ticked up to 51 this week, including a Republican state representative and a church, the group behind many such assaults promises to take “increasingly drastic measures” which are not “so easily cleaned up as fire and graffiti.”

The newest disturbances add to the growing list of abortion activists’ acts of vandalism, theft, and property damage since the leak of the Supreme Court’s Dobbs decision last month.

At 4:05 a.m. Monday, two individuals smashed the windows and threw a lit flare into the office of Washington State Rep. Andy Barkis, a pro-life Republican who introduced a bill to prohibit the abortion of children with Down syndrome. The flare landed on a masonry floor, preventing more extensive damage. Some police have said the failed arson attempt against the building, where the House Republican Organizational Committee keeps its offices, was intended as a distraction for a subsequent robbery. But some legislatorsquestion the event, as it came during radical abortion activists’ campaign of terror, which vandalized four churches in Olympia late last month.

On Sunday, three protesters — one partially nude and clad only in fig leaves — shouted down a priest’s sermon at St. Veronica’s Catholic Church in Eastpointe, Michigan. They chanted a slogan and waved a green bandana associated with Rise Up 4 Abortion Rights, a Revolutionary Communist Party front group promoted by Hillary Clinton.

“In 2022, simply being a Christian or being pro-life seems to be sufficient cause for angry radicals to call in threats, graffiti your door, or firebomb your office,” said Senate Majority Leader Mitch McConnell (R-Ky.) on the floor on Wednesday. “Once again, President Biden and his Justice Department have been totally silent, unable to even simply denounce the hatred.”

McConnell contrasted congressional Democrats’ nonfeasance on the Left’s criminality with the televised January 6 Committee hearings. “The same Democrats who want to make a national spectacle out of their supposed opposition to political violence will not even call out violence and intimidation from their own side, let alone fulfill their oaths and put a stop to it,” he said.

In an open letter posted online Tuesday, the group said the past month’s violence shows “how easy and fun it is to attack” pro-life targets. “Now the leash is off. And we will make it as hard as possible for your campaign of oppression to continue.”

“We promised to take increasingly drastic measures against oppressive infrastructures,” the group vowed. “Rest assured that we will, and those measures may not come in the form of something so easily cleaned up as fire and graffiti.” “From here forward, any anti-choice group who closes their doors, and stops operating will no longer be a target. But until you do, it’s open season.”

The group said it does not always publicly acknowledge its actions, which frequently feature property damage and the slogan, “If abortion isn’t safe, you aren’t, either.”

As of this writing, the most recent attack on a pregnancy resource center took place in Gresham, Oregon, last Friday.