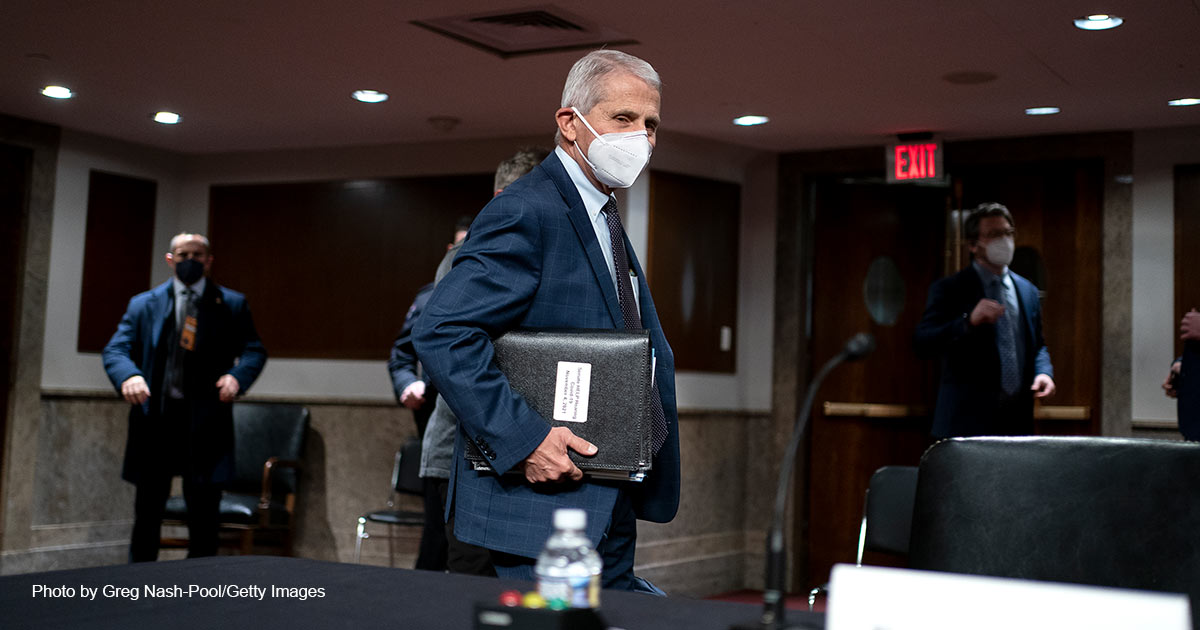 Dr. Anthony Fauci, the most public figure associated with the government’s COVID-19 strategy of government lockdowns and mask/vaccine mandates, announced on Monday that he will leave his post in December.

The 81-year-old Fauci touted his 38-year career under seven U.S. presidents, whom he advised on their response to such public health threats as “HIV/AIDS, West Nile virus, the anthrax attacks, pandemic influenza, various bird influenza threats, Ebola and Zika, among others, and, of course, most recently the COVID-19 pandemic.” Fauci — who acts as chief medical adviser to President Joe Biden and director of National Institute of Allergy and Infectious Diseases (NIAID) — stated he is not retiring but moving on “to pursue the next chapter of my career.” Fauci leaves office as the highest-paid official in the U.S. government. His retirement salary will come to $375,211 a year, according to calculations by Adam Andrzejewski, founder and CEO of the government watchdog OpenTheBooks.com.

In a statement later in the day, Biden called Fauci “a dedicated public servant and a steady hand with wisdom and insight honed over decades.” Biden congratulated himself for following Fauci’s “advice as we’ve tackled this once-in-a-generation pandemic” and leaving America a “stronger, more resilient, and healthier” place.

Biden said that the doctor “has touched all Americans’ lives with his work” — a statement embraced by Fauci’s friends and foes.

“I think the lives and livelihoods of hundreds of millions of children have been harmed in ways that they'll pay the cost for the rest of their lives. Businesses are gone, and nevertheless, we’ve had an incredible spread of COVID everywhere,” Dr. Jay Bhattacharya, a professor of medicine at Stanford University and one of the authors of the Great Barrington Declaration, told “Washington Watch” guest host Joseph Backholm Monday. “I think it was the single biggest public health disaster of all time.”

“The net of his actions during the last two-and-a-half years has been tremendously damaging to the health and well-being of Americans — and, in fact, people around the world who followed his policy direction on lockdowns. And I think will be an enormous part of his legacy,” he said.

During the early days of the pandemic in 2020, Fauci and Dr. Deborah Birx lobbied for “15 days to slow the spread,” which Bhattacharya called a “lockdown-focused strategy that closed schools, closed businesses, closed churches, mosques, and synagogues; disrupted American life and continues to disrupt American life; and did not protect people against COVID.”

Birx confessed in her recent book, “Silent Invasion,” that she knew messaging about a temporary closure was misleading. “No sooner had we convinced the Trump administration to implement our version of a two-week shutdown than I was trying to figure out how to extend it. ‘Fifteen Days to Slow the Spread’ was a start, but I knew it would be just that,” she admitted.

When the policy did not have its intended effect, Battacharya led a group of scientists in criticizing Fauci’s heavy-handed measures and advocating a more evidence-based response. After its publication Fauci coordinated with National Institute of Health leader Dr. Francis Collins to create what Collins called “a quick and devastating published takedown” of the document.

“People like Tony Fauci were blind to the harms of the lockdown,” said Battacharya. “They were so enamored with themselves and with the ideas that they had that they thought that any opposition to it was ipso facto illegitimate.” Fauci “shielded himself from criticism from other scientists and, in fact, worked to destroy the reputations of scientists who criticized him. He showed a tremendous amount of hubris,” Battacharya told Backholm. “At one point,” he noted, Fauci “effectively declar[ed] himself science itself.”

Many criticized Fauci’s numerous public flip-flops. He initially told Americans that masks would offer no protection against COVID-19. By October 2020, Fauci mused, “If people are not wearing masks, then maybe we should be mandating it.” By July 2021, he suggested that vaccinated people start wearing masks under certain conditions.

Fauci protested that the science had changed. But he eventually explained, "The reason for that is we were concerned — the public health community … that it was at a time when personal protective equipment, including the N95 masks and the surgical masks, were in very short supply. And we wanted to make sure that the people, namely, the health care workers ... We did not want them to be without the equipment that they needed. So, there was not enthusiasm about going out and everybody buying a mask or getting a mask. We were afraid that would be turned away from the people who really needed it."

He showed similar flip-flops on the vaccination. Last May, Fauci claimed that the COVID-19 vaccine makes people a “dead end” for the virus, allowing only that fully vaccinated people had a “very, very low likelihood that they’re going to transmit it.” Last month, Fauci admitted that “vaccines, because of the high degree of transmissibility of this virus, don’t protect overly well, as it were, against infection” by the novel coronavirus.

Fauci admitted moving the goalposts about what percentage of Americans had to be vaccinated to achieve herd immunity. “When polls said only about half of all Americans would take a vaccine, I was saying herd immunity would take 70 to 75%. Then, when newer surveys said 60 percent or more would take it, I thought, ‘I can nudge this up a bit,’ so I went to 80, 85,” Fauci told The New York Times in December 2020, shortly after the presidential election. “We really don’t know what the real number is. I think the real range is somewhere between 70 to 90%.”

Fauci’s critics say he overhyped the potential transmissibility of virtually every disease. For example, he warned that HIV/AIDS could be transmitted by standard “household contact.” President George W. Bush bestowed the Presidential Medal of Freedom on Fauci in 2008 for his efforts combatting AIDS, a pet cause of the 43rd president.

Senator Rand Paul (R-Ky.) also publicly accused Fauci of perjuring himself about whether the U.S. government funded gain-of-function research on the coronavirus at the Wuhan Institute of Virology.

Fauci’s resignation comes one month after the 2022 midterm elections, but before the new Congress takes office — and gains congressional powers of investigation and oversight. But Paul says that will not spare Fauci.

“Fauci’s resignation will not prevent a full-throated investigation into the origins of the pandemic,” insisted the senator, another doctor with whom Fauci clashed publicly during numerous rounds of Senate testimony. “He will be asked to testify under oath regarding any discussions he participated in concerning the lab leak.”

On Monday’s radio show, Battacharaya gracefully acknowledged that Fauci “led the agency that funded the work of a lot of brilliant scientists, and that work has helped millions of patients.”

“But at the same time,” Bhattacharya continued, “his leadership during the pandemic has been a total disaster.”