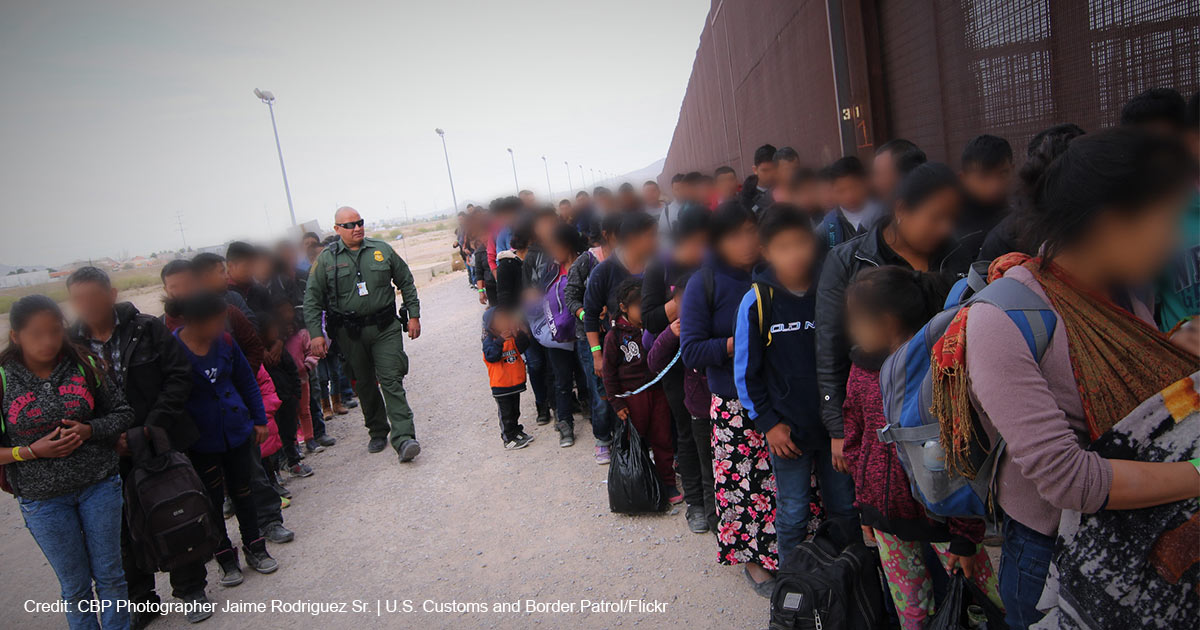 A little over a month later, Biden apparently changed his mind. On Sunday, he flew to El Paso, Texas and made a roughly three-hour visit that included stops at a busy port of entry, a section of the border wall, a processing center, and brief meetings with Customs and Border Protection officials and leaders of local NGOs. The visit was described by CNN as “tightly controlled” and did not include any interactions between the president and migrants.

Texas Governor Greg Abbott (R) met Biden when Air Force One touched down and handed him a letter, which began, “Your visit to our southern border with Mexico today is $20 billion too little and two years too late.”

Abbott went on to note that the president’s “visit avoids the sites where mass illegal immigration occurs,” adding that the city “has been sanitized of the migrant camps which had overrun downtown El Paso because your Administration wants to shield you from the chaos that Texans experience on a daily basis.” The Daily Signal reported that “[c]ity officials dismantled homeless migrant encampments in El Paso ahead of Biden’s visit.”

Mark Dannels, sheriff of Cochise County on the southern border of Arizona, joined Friday’s edition of “Washington Watch” to discuss Biden’s border visit, which he described as “political chess.”

“This president, this Congress, this administration has failed to address border security [and] immigration reform,” he said. “In the last 24 months, we have seen record numbers coming across our border — five million breaches, including a million ‘gotaways’ in this country. … A thousand plus deaths on U.S. soil for people coming across our border illegally. In my county alone, we’ve had since January to the middle of November … over 1,400 people put in my county jail for border-related crimes, all the way up to murder. We’ve had over 500 victims of felony crimes related to the border in my county. Once again, this border is in crisis, chaotic mode.”

In recent weeks, the Biden administration announced new immigration restrictions, which would “limit the number of migrants entering America illegally from Cuba, Nicaragua, Haiti, and Venezuela to 30,000 per month.” The plan also “expands a Department of Homeland Security program implemented in October limiting the number of Venezuelans entering America illegally.” In addition, it would allow migrants from Cuba, Nicaragua, and Haiti to apply for entry through an American who agrees to sponsor the immigrant.

Dannels expressed strong skepticism that Biden’s immigration policies would be effective in helping to end the crisis.

“[Biden’s policies are] failed policies,” he stressed. “It’s also failed messaging. The people that we address on the southwest border — I deal with gotaways almost 100% — people that fight flight from us down here in the Tucson sector. … These numbers speak — they’re nonpolitical numbers. … The deaths are real.”

Dannels went on to address Biden blaming Republicans in Congress for the border crisis.

“This president has failed to prioritize this border,” he emphasized. “What he has done is played the blame game — ‘It’s Congress’s fault,’ ‘It’s the Republicans’ fault.’ This is not a political issue. It’s not a blue issue. It’s not a red issue. It’s not a white issue. It’s a red, white, and blue America[n] issue. And the day we recognize and get politics out of this, and we identify that the problems on the border are real. … It’s America’s border, not just the southwest border. We can fix this, but right now we’ve got to quit this blame game. You’re the leader of our country. Lead with us, not against us.”

In his hand-delivered letter to the president, Governor Abbott outlined five ways that he believed Biden can restore order to the border through the “faithful execution of federal laws.” They include: “comply[ing] with the many statutes mandating that various categories of aliens ‘shall’ be detained, and end the practice of unlawfully paroling aliens en masse”; fully enforcing the Remain-in-Mexico policy and Title 42 expulsions; “aggressively prosecut[ing] illegal entry between ports of entry, and allow[ing] ICE to remove illegal immigrants in accordance with existing federal laws”; “resum[ing] construction of the border wall in the State of Texas, using the billions of dollars Congress has appropriated for that purpose”; and “designat[ing] the Mexican drug cartels as foreign terrorist organizations.”