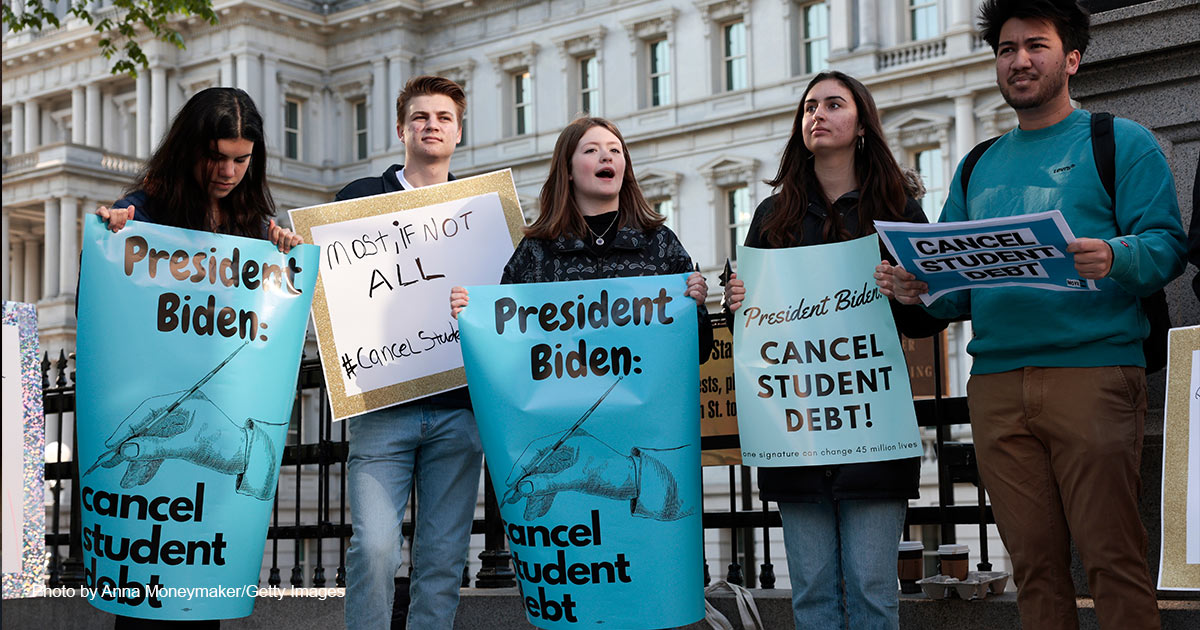 A leading economist has denounced President Joe Biden’s plan to let some Americans write off thousands of dollars of student loans as “irresponsible,” “unfair” to those who paid their loans, and “astonishingly imprudent.”

Although the exact details have been restricted to a small circle of insiders, Biden will let those who earn less than $125,000 expunge up to $10,000 of student loan debt, administration sources confirmed to the Wall Street Journal and the Associated Press on Tuesday. He will also not require borrowers to resume payments on any remaining student loans, which have been paused since March 2020 due to COVID-19, until next January.

Although the media widely dubbed this an act of “debt forgiveness,” that’s a misnomer. “The debt doesn’t really get canceled. It just means they shift the debt” from “the people who took out the loans to you and me and everyone else who’s a taxpayer,” Stephen Moore, a senior fellow at FreedomWorks and former economic adviser to President Donald Trump, told “Washington Watch” guest host Joseph Backholm on Tuesday. “It’s a taxpayer bailout. That’s what we should call it.”

In many cases blue-collar workers, who never went to college, will have to pay the debts of wealthy families who racked up student debt, sometimes while pursuing degrees in exotic subject matter.

“The idea that we’re teaching a whole generation that you don’t have to pay back your debts is just irresponsible. But more importantly, it’s completely unfair to the people who did pay back their student loans the way an upstanding person would do,” Moore told Backholm, “Also, given the fact that we already have a $24 trillion national debt, the idea of adding $300 billion more debt is astonishingly fiscally imprudent.”

If would cost the government $300 billion to expunge $10,000 of debt to Americans under the announced income specifications, or $329 over a 10-year period, according to an estimate from the Penn Wharton Budget Model. Some also warn the plan will worsen record-breaking inflation levels. “Student loan relief is not free,” said former Obama economic adviser Jason Furman. “Part of it would be paid for by the 87% of Americans who do not benefit but lose out from inflation.”

Economists believe bailouts create moral hazards, with many on the Left accusing big business of “privatizing profits and socializing losses.” A 2014 study found that banks bailed out by the federal government’s Troubled Asset Relief Program (TARP) went on to “initiate riskier loans and shift assets toward riskier securities after government support.” However, due to the way they changed their portfolio, “these banks appear safer according to regulatory ratios, but show an increase in volatility and default risk.”

“You don’t reward bad behavior,” Moore stated. “The collaborators in this scam are the universities themselves. The universities should pay the money back, not the not the taxpayers.”

The move would top the largest single act of debt forgiveness in the history of the Department of Education which took place on June 1, when Biden wrote off $5.8 billion in student loan debt for students who attended Corinthian Colleges. On August 16, Biden canceled another $3.9 billion for former students of ITT Technical Institute. Last week, Biden proposed a separate “Fresh Start” program, which would make 7.5 million who already defaulted on their student loans eligible for additional loans and Pell grants.

Moore warned the Biden administration’s profligate spending is unsustainable. “Just in the last three weeks, they just passed a $600 billion spending bill. Now they went $300 billion more. Last year. Biden spent and borrowed $3 trillion,” Moore stated. “It is going to bankrupt this great country of ours if we stay on this path.”

Members of the Democratic Party’s progressive wing have said the plan is too limited. The NAACP lobbied the president to wipe out $50,000 of student loan debt per person. Rep. Cori Bush (D-Mo.), a democratic socialist, tweeted, “POTUS must cancel student debt. All of it.” Today, some 44 million Americans owe more than $1.74 trillion in student loans. Roughly one in three owe less than $10,000, and half borrowed less than $20,000.

Forgiving student loans may be a prelude to even greater government control of the education system. “What the Left wants — they’ve wanted this for 25 years — is ‘free’ college,” warned Moore. “They want the taxpayers to pay for everyone’s college, and this is a big, big step in that direction.” Senator Bernie Sanders (I-Vt.) campaigned for president touting his “College-for-All” plan and a complete eradication of all student debt. Hillary Clinton adopted the plan in 2016, and in 2020, more than a dozen candidates supported taxpayer-funded college tuition and/or proposals to write-off all student loan debts.

Bush’s fellow socialist, Rep. Jamaal Bowman (D-N.Y.), justified having the U.S. taxpayer pick up the tab for college loans, claiming it would touch off an economic renaissance. “If we cancel student debt outright or a large chunk of it, people will then feel more confident in starting families, or investing in the market, or starting their own businesses, and would really inject capital into the economy, which is what we need now,” he told MSNBC.

“I do believe the Democrats think this is a way to win votes. But … people are really, really angry about this,” Moore concluded. “It’s totally contrary to the American ideal. If it is being done for political purposes, I think it’s going to boomerang against the Democrats.”