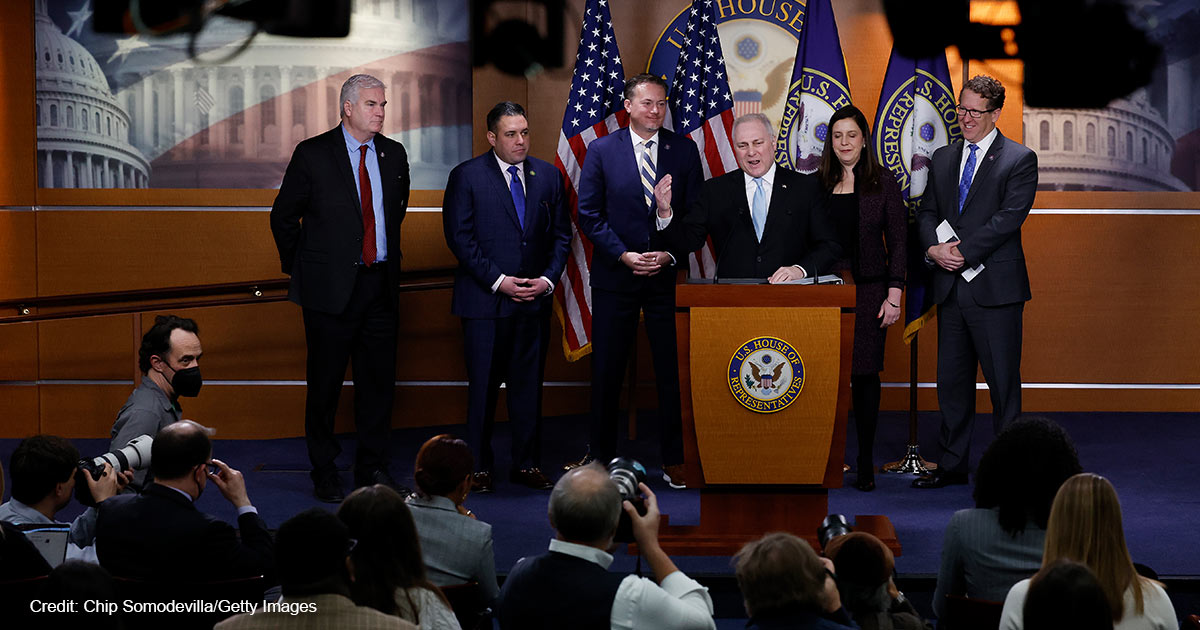 For all of the false starts, the House’s new leadership team is more than making up for lost time. With last week’s drama in his rearview mirror, Speaker Kevin McCarthy (R-Calif.) is hitting the ground running with an armload of bills — all thanks, Majority Leader Steve Scalise (R-La.) says, to the Republicans’ decision to stand up and fix the process.

“We needed to change the way that Washington works to empower members of Congress to actually fight for the people who are struggling out there,” Scalise told Family Research Council President Tony Perkins on “Washington Watch.” Was it messy and uncomfortable? Absolutely. “But frankly,” he pointed out, “this is a debate that’s been years in the making.” As far as he’s concerned, the four days it took conservatives to hash out a new rules package were nothing compared to what Americans got in return: more accessibility and accountability.

“I think people who watched last week were encouraged that they heard real debate on how Washington should work better.” Democrats “were going nuts,” Scalise agreed, because they knew “their party was over.” No more “thousands of pages of bills [like] omnibus spending bills [worth] $1.7 trillion dropp[ed] by the dark of night [and] voted on the next day, when nobody has a chance to read it. All kinds of unrelated items that have nothing to do with basic government funding. That’s the kind of stuff people have been sick of for a long time.”

Ultimately, Scalise insisted, “spending a few days to fix what’s broken with Washington so that we can spend the next two years fighting so that Washington can stand up for the people who are struggling across America is refreshing.” If Democrats are ready to be a part of the solution, then they can thank House Republicans for letting them have the input conservatives did not.

Republicans started by killing the president’s plan to more than double the size of the IRS. You know, Scalise half-joked, “I have never gotten one phone call in all my years in Congress of anybody asking me to add more people to the IRS. I get a lot of people calling saying we’d like more Border Patrol agents.” By a vote of 221-210, Republicans took the first step in putting the expansion on ice. And the reality is, Scalise warned, the IRS isn’t going to go after the millionaires and billionaires with this plan. They’re coming for the small business owners and single moms. How does he know that? Because Republicans offered an amendment stopping these new agents from targeting lower income families. “And every Democrat voted against it,” Scalise pointed out.

There’s no reason to believe the two parties will find any consensus on life either, Senator Lindsey Graham (R-S.C.) explained later in the program. “After Dobbs, the Democrats introduced — and we voted [on it] — a taxpayer-funded abortion bill up to the moment of birth. The exceptions were a joke. … And every Democrat voted for it. And I thought, ‘Okay, this is the most extreme position. This is North Korea and China.’”

As the House gears up to fight that agenda with a series of pro-life bills, Graham believes this is “a defining moment for the movement.” “There are people who are saying that abortion should be a state issue. No, it’s a human rights issue.”

But real, meaningful change takes time. Remember, Graham explained, “[the] partial-birth abortion ban took about 10 years.” Americans can’t get impatient. “This is a cause worth fighting for,” he insisted, and eventually, “I believe the American people are going to soundly reject taxpayer-funded abortion all the way up to the moment of birth [because it’s] extremely radical and out of sync with the character of [our country]. … And I’m telling my Republican colleagues who are running in 2024, if you can’t label the Democratic Party extreme on this, you’re not very good.”

In the weeks after Dobbs, Perkins pointed out, the GOP struggled to find a unified message on life — or any message at all. “I don’t think Republicans were prepared for the success that came through Dobbs,” he said. “…[T]oo many Republicans were silent. It was kind of like the dog that caught the car [and] didn’t know what to do once they got it. We had Roe overturned, and … [conservatives in Congress] really had not thought through that scenario.”

Graham’s 15-week abortion limit, which struggled to get traction in the aftermath of the Supreme Court’s ruling, was a way of building consensus and moving the ball forward. But “the Republican Party was not ready,” Graham lamented. “I had a hard time, quite frankly, getting my Republican colleagues to sign up. [They bought into] a narrative out there I totally reject — that somehow the abortion issue hurts Republicans. I don’t buy that.”

Other conservatives worried the bill didn’t go far enough. But as Perkins — who believes life should be protected at conception — pointed out, “You’re just setting a minimum.”

Exactly, Graham replied. “The key to my bill, and I want people to understand this [is], yes, I’d like to do more. But my bill allows states to do more. The Democratic approach destroys every state pro-life protection at the state level, so I’m getting cover to do more in those states where we can.”

Now that Republicans have momentum in the House, pro-lifers hope the hesitancy to build on Dobbs is over and conservatives can get on the same page. Because “the worst possible outcome for the pro-life movement,” Graham argues, “[is] to surrender the nation’s capital to the radical Left. … If we surrender Washington, that’s the end of the pro-life movement.”