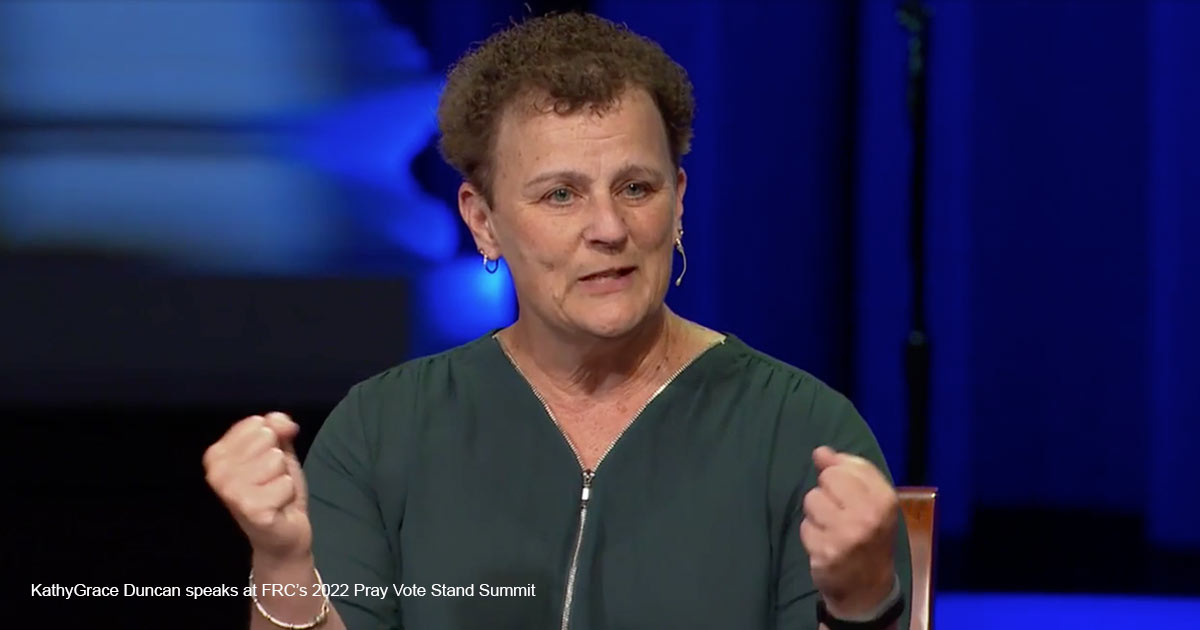 “Being a woman is good, despite what culture says.”

KathyGrace Duncan, who once lived as a man, is now an advocate for women who identify as transgender at Portland Fellowship in Oregon. Recently, she gave her testimony as part of a panel discussion on the transgender movement at Family Research Council’s annual Pray Vote Stand Summit.

Raised in an abusive household, Duncan had learned at a young age that being a woman was unsafe. “I hated being a woman. I hated everything about it. I was very detached from my emotions. Even as a kid, it felt like I just existed,” she said. In the early 1980s, at the age of 19, she started taking hormones and changed her name to Keith. Upon transitioning, she was harassed by her family for three months and lost the job she began working at.

Even as the dust settled around her change, her relationship with her parents remained strained. But 11 years later, she was confronted with the truth about herself and decided to detransition from her male status. In an interview with FRC President Tony Perkins, she attributed her change of heart to the Lord and the work of the Holy Spirit.

Duncan told The Washington Stand that many who struggle with gender identity long to “find acceptance, love, and a sense of belonging.” She went on to say that the younger generation today tends to isolate with social media, which can drive the “gender confused” towards trauma bonding, a strong sense of belonging with traumatized individuals, and activism. “It’s almost a death trap, if you can’t find a way out,” said Duncan.

While social media and culture are quick to affirm those who want to transition their gender, Duncan advocates for a different view. She sees gender identity not as a sexual issue, but a relational one. Like Duncan, many in the trans movement come from abuse and deep-seated trauma experienced in childhood.

Reflecting on those hurting children, she said, “We don’t provide [kids] a space to be heard.” As she says, doctors and psychiatrists, who want to help these children, often provide the wrong diagnosis and fail to evaluate their mental health. For this reason, she calls the apparent rise in trans identifying youth a “mental health crisis, not gender dysphoria.”

As a women’s ministry leader, Duncan also understands women who feel like they don’t fit the cultural expectation of “feminine” and the identity crisis that can come from that. “It’s time for women to break the mold,” she said. “We don’t have to look feminine, we just need to draw it out,” she explained. Duncan quoted Psalm 139:13-14 to clarify the innate feminine design of women. She encourages women to “embrace their beauty,” which she views as a reflection of God’s beauty.

Duncan also had a word for the church. She cautioned Christians against “putting a timeline on healing or saying what it needs to look like.” Duncan added that detransitioning is not an overnight change. However, those who are detransitioning need “accountability and community,” while believers should be mindful of “preaching to them, and not at them,” said Duncan. Above all, churches need to “provide a safe place to be,” and a “judgment-free zone.” She encourages those who struggle with their identity to open up to pastors and to seek out vetted Christian counselors, especially those who are trauma informed.

“We should be a hand up or a hand out, but it shouldn’t be a fist,” Duncan commented on the approach people should take when they’re trying to help detransitioners. She warned believers against bombarding the gender confused with Scripture. Instead, she recommends letting these individuals wrestle with their healing journey in the context of a healthy discipleship.

Ultimately, “it is the Lord who knows them the best and loves them the most,” she said. Considering her own journey, Duncan said, “I wouldn’t be here if it wasn’t for Him.”