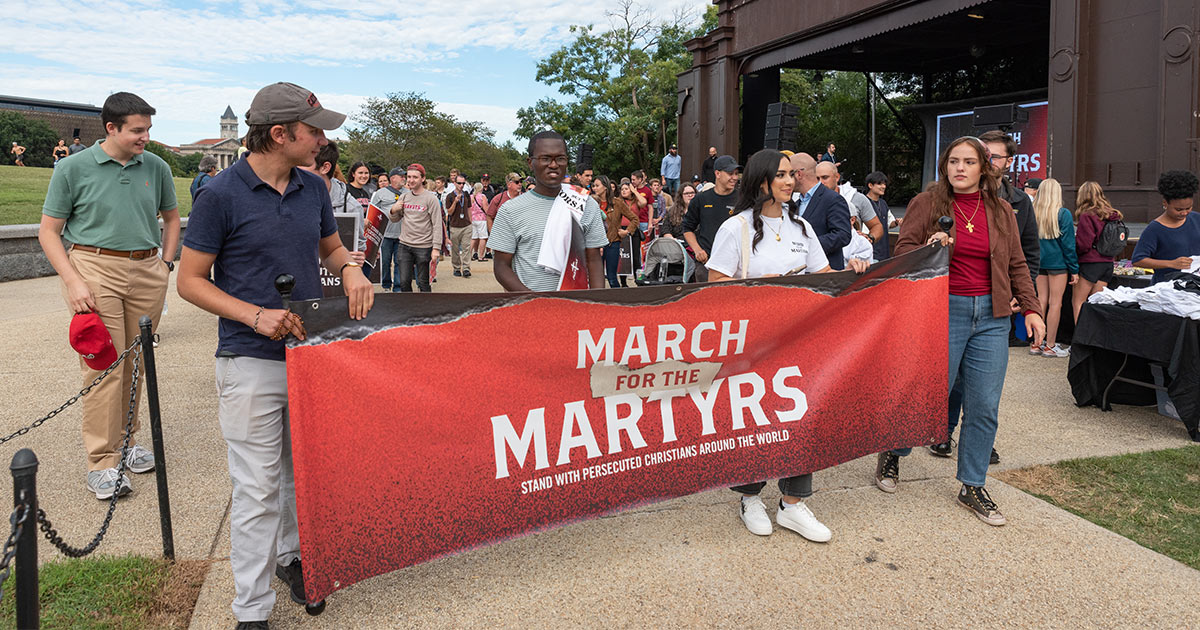 “Every two hours a Christian is killed,” said Gia Chacon, founder of For the Martyrs at the third annual March for the Martyrs that took place this past Saturday in Washington, D.C.

The event kicked off with a rally at the Sylvan Theatre, featuring worship, prayer, and encouragement from pastors and evangelists before attendees marched in solidarity for persecuted Christians worldwide. The march ended at the Museum of the Bible, where survivors and speakers shared their testimonies and educated the public about religious persecution in Turkey, China, and the Middle East.

Chacon founded For the Martyrs in 2017 after hearing the stories of refugees who had endured horrible acts of violence and persecution because they refused to denounce their faith in Christ. As Christian persecution continues to grow, Chacon’s goal is to bring awareness and aid to suffering believers around the world.

In 2021 alone, more than 360 million Christians have suffered persecution and discrimination, 5,898 Christians were killed for their faith, 5,110 churches and Christian buildings were attacked, and 4,765 believers were detained without trials, arrested, sentenced, or imprisoned.

“It’s such an honor to stand and advocate for the persecuted church. While we live in immense luxury in the West, so many of our brothers and sisters face intense levels of persecution just for proclaiming the name of Christ. As one body in Christ, if one part of the body suffers, we all suffer. It’s important to always keep them in our prayers and help them in their trials and tribulations! So proud of the work For the Martyrs and my friend Gia Chacon is doing for the body of Christ!” Kangmin Lee, conservative Christian commentator and influencer, told The Washington Stand.

Following the march, attendees got to hear from Esther Zhang, a Chinese refugee who, in 2014, escaped Chinese Communist Party imprisonment with her then 13-month-old daughter. Her father, a pastor, was sentenced to 12 years in prison (ending in 2025) for not being willing to compromise his faith and the biblical integrity of his church. Zhang went on to tell the story of her father’s frightening journey from sanity to near insanity, as he began taking mysterious “white pills” administered by the CCP.

Even though her love for her father and fellow Christians in China has left her torn between the two continents, she remains steadfast. “I’m praying that God will have me do whatever He wants me to do. That anybody who hears my story will be led to think ‘What’s God’s plan in their Christian life? Why do we have freedom in the U.S.? Why is there no freedom [in China]? Why are Christians different?’ That’s why I’m telling my story,” she said.

Former NBA player and freedom activist Enes Kantor Freedom (who legally changed his last name) shared his story of growing up in Turkey and his reasons for raising awareness about persecution around the world. Surrounded by cultural hatred toward Jews, Christians, and Americans, Kantor Freedom said it took living in the United States to correct the lies he believed as a child. But it was in America, as an NBA star, where he soon had to pay the price for standing up for his beliefs. His pro-freedom, anti-tyranny activism may have cost him his career and relationship with his family back in Turkey. However, he, like Esther Zhang, remains committed to speaking up for those who cannot speak for themselves.

Closing the evening, Pastor Andrew Brunson, who spent two years in a Turkish prison, turned the attention from Christians abroad to Christians in the states, addressing persecution from a believer’s perspective. Persecution on the scale of Turkey or the Middle East may not be an immediate threat in America, yet Brunson encouraged Christians to prepare for the times ahead.

He told TWS, “What matters is the next billion years in heaven rather than the price I pay here. And if you can strengthen yourself with this kind of mentality, then you’re more likely to be willing to pay the price. I think what most makes us willing to pay the price is if we love God, because love will drive sacrifice, it will drive perseverance. [Love] makes us willing to take risks. If we love him, we will stand for him. … You know, that eternal mindset puts things in the right perspective. Think about that. Think about the next billion years, as opposed to the price you pay here.”