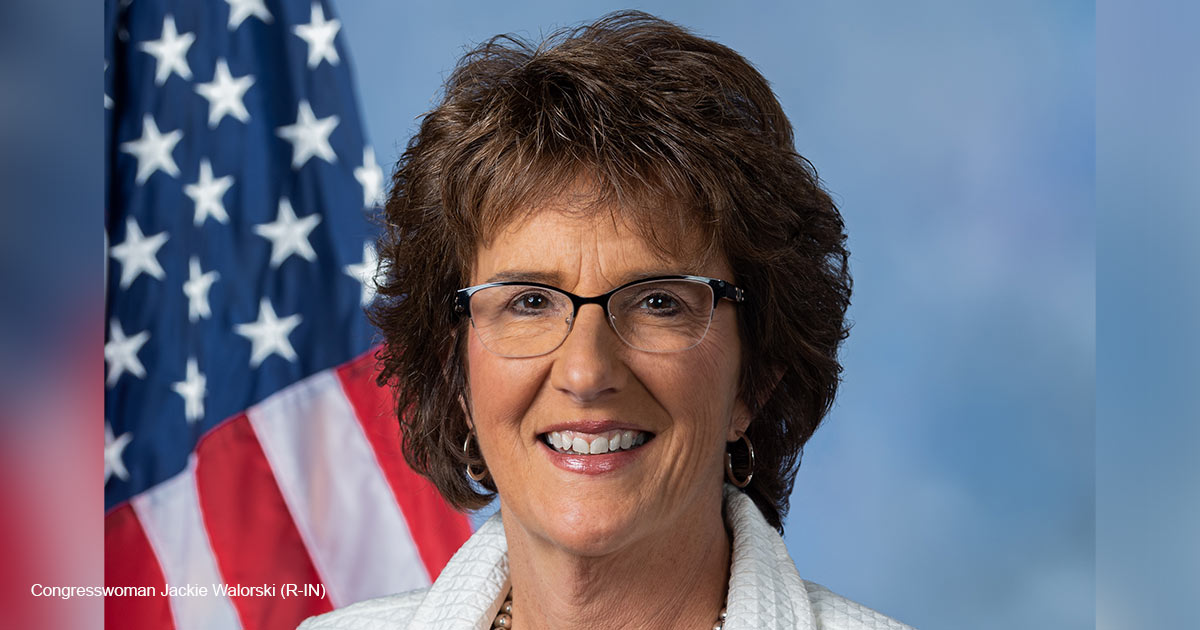 A pro-life member of Congress, Rep. Jackie Walorski (R-Ind.), died in a car crash on Wednesday in northeastern Indiana. Two staffers in her vehicle — Emma Thomson, 28, and Zachery Potts, 27 — also perished in the accident in Elkhart County after a driver reportedly went left of center and crashed into Walorski’s SUV on State Route 19 at 12:32 p.m. The driver of the other vehicle, 56-year-old Edith Schmucker, also lost her life.

Walorski, who was just two weeks away from her 59th birthday, scored 100% on FRC Action’s Scorecard in 2018. “We thank Rep. Walorski for consistently voting to defend and advance faith, family and freedom,” said Family Research Council President Tony Perkins, as he presented her with the “True Blue” award. “Rep. Walorski deserves praise for her unwavering commitment to stand for life, family, marriage, and religious liberty.” Walorski replied, “Family is the foundation of a strong society, and I am committed to defending the true American values of faith, family, and freedom.”

Walorski graduated from Taylor University and worked as a reporter for WSBT-TV in South Bend. She and her husband, Dean Swihart, served for four years as missionaries to Romania and established a foundation to aid impoverished children. Elected to Congress in 2012, she succeeded Rep. Joe Donnelly, a Democrat. She had also served for five years in the Indiana House of Representatives.

“She lit up every room she was in and she brought joy, passion, brilliance to everything,” said Brady. He served with Walorski — whom he dubbed the “happy Hoosier” — on the Ways and Means Committee, where Brady is the ranking Republican member. Walorski was “a champion for the innocent unborn. She was a warrior for religious freedom. She especially had a heart for adoption and foster children,” Brady recalled. “She helped lead our efforts to make sure state and federal governments couldn’t cancel out faith-based organizations, who were merely trying to practice their faith and connect foster kids and other children to their forever home.”

Walorski’s colleagues remembered the five-term Republican fondly as a legislator and as a friend. “She’s such a wonderful person,” Rep. Ron Estes (R-Kans.) told Backholm earlier in the program. “She was one of the first members of Congress to help me when I first ran for office. And she puts her heart and soul into the work she did for her constituents in Indiana and continuously works to make things better for America.”

Those who worked with her described her as a faithful believer who modeled servant leadership. “Jackie was a true public servant — selfless, humble, and compassionate. She was a devout Christian, a passionate advocate for life, and a leader among Hoosier representatives,” said her colleague, Rep. Jim Banks (R-Ind.), the chairman of the conservative Republican Study Committee, of which Walorski was a member. “Everything Jackie did was to serve others.”

Condolences and expressions of grief poured in from around the country in the hours following the congresswoman’s passing. Former Vice President Mike Pence, an Indiana native, said he and his wife, Karen, were “heartbroken by the tragic passing of our dear friend Rep. Jackie Walorski. She served Indiana in the Statehouse and the Congress with integrity and principle for nearly two decades and will be deeply missed.”

Pro-life leaders also mourned the loss of Walorski, who would likely have coasted to re-election in the fall. FRC's Perkins said, "Jackie was a strong, committed and fearless believer who has left an indelible impact.  She was a champion for protecting mothers and their unborn children and helping families adopt children in foster care. She will be remembered for her dedication to faith family and freedom.”

Jeanne Mancini, president of the March for Life, agreed, writing, “Rep. Walorski was an ardent pro-lifer and often attended the March for Life." “Praying for her family as they face this sudden and unexpected grief. RIP good and faithful servant.“ Kristan Hawkins of Students for Life noted, “My heart and the hearts of my team @StudentsforLife & @SFLAction are with the family of @RepWalorski, who tragically passed in a car accident this afternoon. We are grateful for Rep. Walorski’s strong commitment to the pro-life cause and dedicated years of public service.”

The unexpected death offered a rare moment of bipartisan consensus wrapped in regret. Transportation Secretary Pete Buttigieg, a former two-term mayor of South Bend, where Walorski began her reporting career, wrote, “I’m shocked and saddened to hear of the tragic death of Congresswoman Jackie Walorski. My thoughts and prayers are with her family and the other victims of this terrible crash.”

Yet Walorski’s staff highlighted the hope that sustained the late legislator, and all Christian believers. “She has returned home to be with her Lord and Savior, Jesus Christ,” Walorski’s official Twitter account announced this afternoon. “Please keep her family in your thoughts and prayers.”