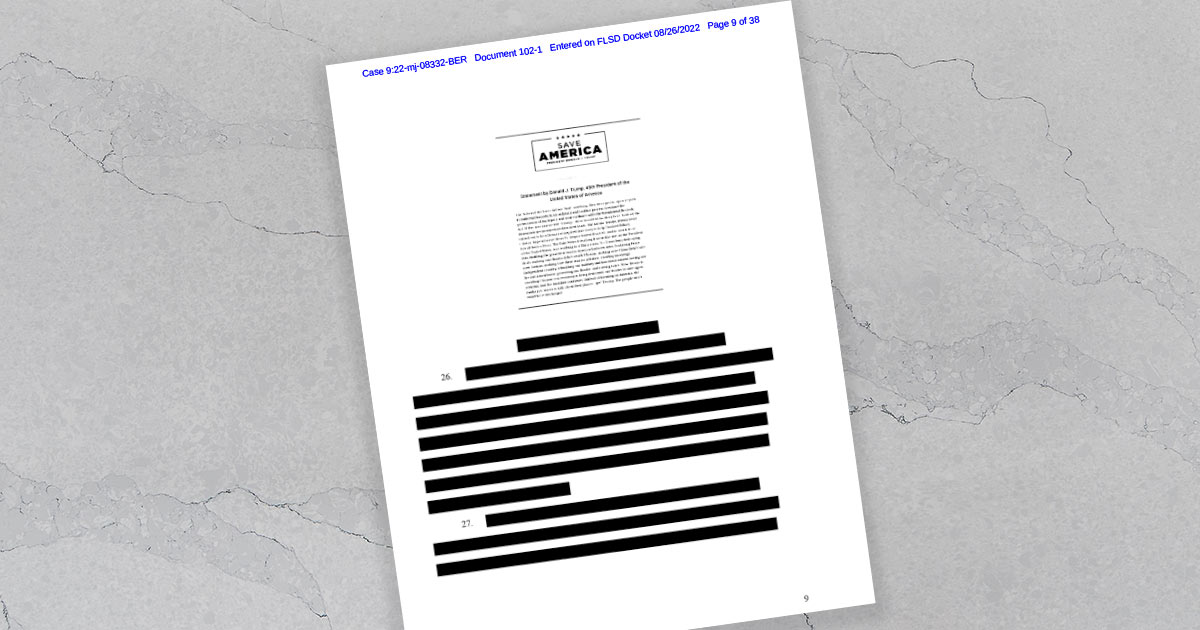 Facing intense public backlash, the Biden administration on Friday released a heavily redacted version of the affidavit justifying the unprecedented raid on President Donald Trump’s home. The amount of material blacked out has convinced a leading congressman “there were very likely political motivations” behind the action, a concern shared by a former high-level Justice Department official.

On Friday afternoon, the administration released a 36-page document that contained two pages of addenda. But “about two-thirds of it is simply blacked out,” John Daukas, a former acting assistant attorney general for Civil Rights at the Justice Department, told “Washington Watch” guest host Joseph Backholm shortly after its disclosure.

Pages 9-16, 18, 20-21, 24-28 are virtually all redacted. The Biden administration censored large portions of several other pages, as well — a move officials claimed was necessary to protect those involved in the investigation. “The materials the government marked for redaction in the attached document must remain sealed to protect the safety and privacy of a significant number of civilian witnesses, in addition to law enforcement personnel,” asserted U.S. Attorney Juan Antonio Gonzalez.

President Donald Trump called the affidavit “a total public relations subterfuge by the FBI & DOJ” in a Truth Social post. “Judge Bruce Reinhart should NEVER have allowed the Break-In of my home. He recused himself two months ago from one of my cases based on his animosity and hatred of” Trump, the 45th president said in a post on Truth Social. “What changed? Why hasn’t he recused himself on this case?”

Trump faulted the document for omitting too much of the text and noted that it did not verify allegations that he had pirated away the nation’s nuclear launch codes. The document instead justifies the raid on the grounds that the signatory did not “believe that any spaces within the PREMISES have been authorized for the storage of classified information.” It also states that “probable cause to believe that evidence of obstruction will be found,” but any reasons to believe this have been elided from the public record.

There is “something very fishy about all this,” Rep. Jim Banks (R-Ind.), chairman of the conservative Republican Study Committee, told Backholm earlier in the program.

“It’s never happened before in American history that they would raid the home of a chief political adversary, who happens to be the former president of the United States of America. And to this day, Merrick Garland and Christopher Wray have not given an adequate response or a reason why. That’s why many of us wanted this affidavit to be made public,” said Banks. “But then when we got our eyes on it just a few minutes ago to see that most of it is marked out and redacted, because they don't want to provide that transparency. It tells us something is very fishy about all of this.”

Banks pointed out that even the form of the affidavit differs from standard legal documents of its kind. “The redacted affidavit doesn’t have footnotes at the bottom that explain why they redacted all of the information that they did, which is the normal procedure of a situation like this,” he said.

He and Daukas slighted the federal government for its history of dispensing two-tiered justice, depending on the status of the perpetrator. “The track record of the DOJ under Joe Biden, even before the highly politicized nature of their activities in recent years, means that we shouldn’t give them the benefit of the doubt. We should demand greater answers and transparency,” Banks said. “And in this case, the fact that they’re not giving us that transparency tells us that there were very likely political motivations for why they raided the former president’s home.”

Daukas agreed that “the FBI, through its misconduct during the Russia collusion hoax, has greatly damaged its credibility.” Furthermore, “the Department of Justice has been leaking, leaking, leaking information for the past many weeks now. And yet it goes then goes to the judge and says, ‘Well, we’ve got to keep all this material secret.’ So, it’s a very unfair situation at this point.”

Banks vowed to thoroughly investigate the raid if House Republicans prevail in the November midterms. “If there’s ever been the right guy in the right place at the right time, it's going to be Jim Jordan chairing the House Judiciary Committee come the first of January when we take back the majority, because the Judiciary Committee has the oversight of the Department of Justice,” said Banks. “Those are going to be primetime committee hearings that you’re going to want to watch on TV,” Banks told Backholm. “The top leaders of the DOJ and the FBI are going to be forced to answer the questions that they don’t want to answer today.”