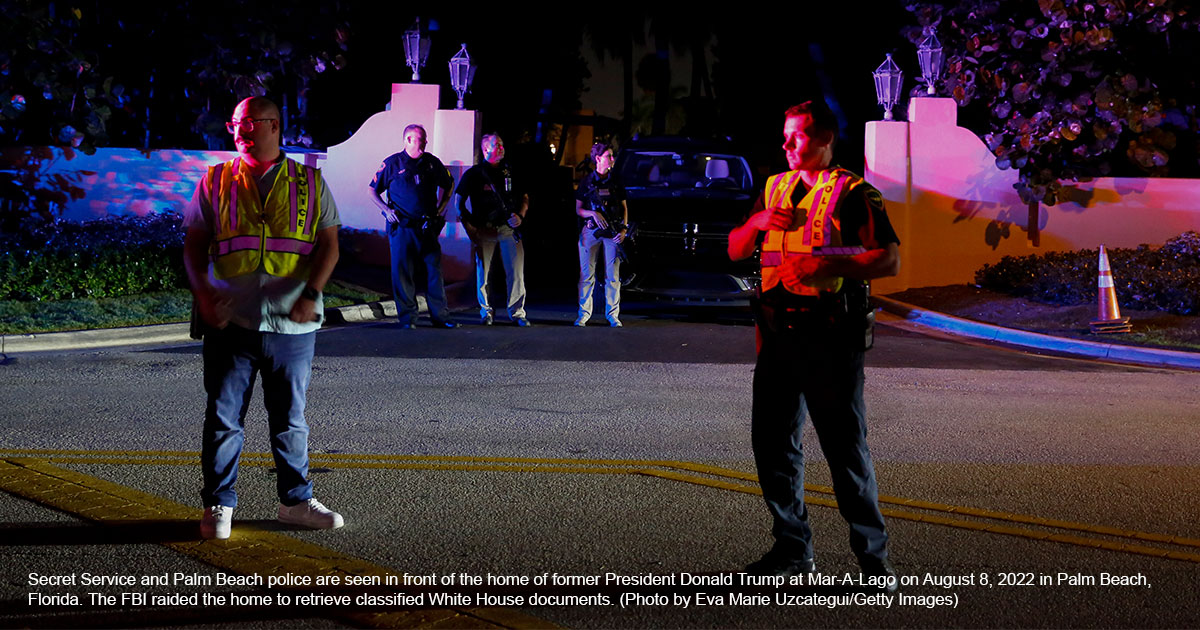 Here’s What the FBI Seized at Mar-a-Lago

The Biden administration released the full text of the search warrant that led to the FBI’s raid on President Donald Trump’s home, Mar-a-Lago, including a full receipt of the files the agents seized.

The first item listed on the “receipt for property” is Trump’s executive grant of clemency to Roger Stone. The second simply listed “Info re: President of France,” Emmanuel Macron, with whom Trump had a conspicuously contentious relationship.

The estimated 30 agents who searched the president’s 58-bedroom Palm Beach mansion on Monday carted off 21 boxes of material, as well as multiple binders of photographs, a “leatherbound box of documents,” a “potential presidential record,” and a “handwritten note.” Federal officers took four sets of documents they say were marked “top secret/sensitive compartmented information,” three sets of papers marked “secret,” and three marked “confidential.”

“It was all declassified,” said Trump in a statement.

Although Attorney General Merrick Garland said during a brief statement Thursday that he “personally approved the decision to seek a search warrant in this matter,” the released warrant is the first concrete information released by the administration in the five days since the action. The ongoing fallout has led numerous people — including such Democrats as former New York Governor Andrew Cuomo — to demand more information, information that has largely not been forthcoming. The New York Times reported, “The White House is staying quiet about the FBI search in an effort to make sure the operation is not seen as partisan.”

“We see this on issue after issue after issue with this administration: Don’t believe your lying eyes,” said Chad Wolf, the former acting DHS secretary who now serves as an executive director of the America First Policy Institute.

Among the groups pressing the Justice Department to release all non-classified documents about the raid is Wolf’s think tank. The FBI raid “takes our democracy to a dangerous place,” said AFPI CEO Brooke Rollins. “This marks the third recent election in which the FBI meddled in the outcome — each time against the 45th President of the United States (2016 ’Russiagate,’ 2020 Hunter Biden Coverup, and now 2022).” On Tuesday night, AFPI demanded the Biden administration release “all emails between the FBI and relevant DOJ components and between members of the January 6th committee and their senior staff.” It also requested “all emails from reporters for the Washington Post, New York Times, and ABC News who appear to have received leaked information from the FBI about this raid, attorney Mark Elias and the law firm of Perkins Coie,” the law firm that funneled funds from the Democratic National Committee to finance the production of the Steele Dossier.

“Unfortunately, over the last 16 or 17 months, what we are seeing is as the weaponization of the levers of government,” Wolf told “Washington Watch with Tony Perkins” on Friday. “It’s not just in this one case, but what this one case actually is bringing it to the light now is: How do you selectively use your law enforcement discretion to go after your political opponents” and “and use the level the levers of the federal government to come after them?”

Legally persecuting one’s political enemies, Wolf said, explains everything from the January 6th Committee hearings, to the arrest and strip-searching of former Trump trade adviser Peter Navarro, to threats of using the federal government to investigate parents complaining at school board meetings for violating the Patriot Act. “These things are only happening to one select group of individuals, and that’s conservatives or those on the Right,” Wolf told Perkins. That violates “a basic premise of fairness. … Most Americans are saying something doesn’t smell right here.”

Concerns of politically-motivated prosecutions, which marked the Obama-Biden administration, have resurfaced since January 2021 and reached a crescendo this week. “The next step in this process is going to be that people who are supporters of Donald Trump or just conservatives complaining about this … are going to begin to get labeled as potential insurrectionists and are going to begin to get harassed by law enforcement. That’s the next step in this playbook, sadly,” said Senator Marco Rubio (R-Fla.).

Perkins called the raid of a former president’s home “unprecedented and unsettling,” adding that he would not want to see a member of the opposite party mistreated by law enforcement officials, either.

“This seems to me to be very much in order with what we’re seeing from these new kind of Democrats,” Larry Taunton, the executive director of the Fixed Point Foundation, told Perkins later in the show. “We’re dealing now with Marxists.”

Many critics of the hours-long search pointed out the hypocrisy of federal officials, who never searched the home of former Secretary of State Hillary Clinton, although she transmitted classified national secrets over an unsecure e-mail server from her home in Chappaqua, New York. “It’s very much a tactic of the Left to accuse you of the very things that they’re doing. They commit violence; they accuse you of violence. They put out all kinds of false information; they accuse you of doing it,” explained Taunton. He said bureaucrats in the Deep State would proceed, “in a steady-drip fashion, to release salacious information, things they think will be damaging about Trump, that they [allegedly] saw at Mar-a-Lago.”

“It’s about hanging on to power no matter what,” Taunton said. “And that means intimidating your opponents. That means hiring additional IRS agents in order to seize their assets. It means violence in the streets. We’ll see more and more of this, and we’ll see an escalation of it.”

The raid came as much from abject fear as loathing of the 45th president, Taunton assessed. “This raid on Mar-a-Lago reveals the obvious fact that they fear him most of all as a political opponent in 2024. And since they weren’t getting what they wanted out of the January 6th hearings, they decided that this perhaps would give them that bump,” Taunton stated. “And, of course, it’s resulted in exactly the opposite: It’s galvanized support for Trump.”