NBA Player: ‘I Lost My Whole Career’ Standing Up to China

Playing for the NBA gave him a platform — using it cost him his career. That’s the latest chapter in the unlikely story of Enes Kanter Freedom, the outspoken basketball center who’s spent the bulk of his 11 years in the league fighting for human rights. Heading into this season, he knew it might be his last — not because of his play on the court, but because of his refusal to back down off it. “You have shoe deals. You have endorsement deals,” his managers warned. “If you want to get another contract, we cannot attack Nike. We cannot talk about China.” Enes did anyway — and doesn’t have a single regret.

In a special sit-down interview with Washington Stand reporter Marjorie Jackson, the recently released free agent talked about the cost of his convictions. “I pretty much lost my whole career to just stand up for the innocent people in China,” he explained. The Turkey native, who became a U.S. citizen this past November and added “Freedom” to his surname in celebration, has spent a lot of personal capital shining a light on the Uyghur genocide.

Before the Beijing Olympics, he got the world’s attention for wearing shoes on the court dripping with painted blood, the message “Made with Slave Labor” on the side. The league called him, begging him to take them off. Enes refused. Halfway through the first game he played wearing them, he got a text that China had blacked out every Celtics game for the rest of the season. “It took one-half of a Celtics game, with me wearing these shoes, on the bench, for the games to get banned,” he said later. 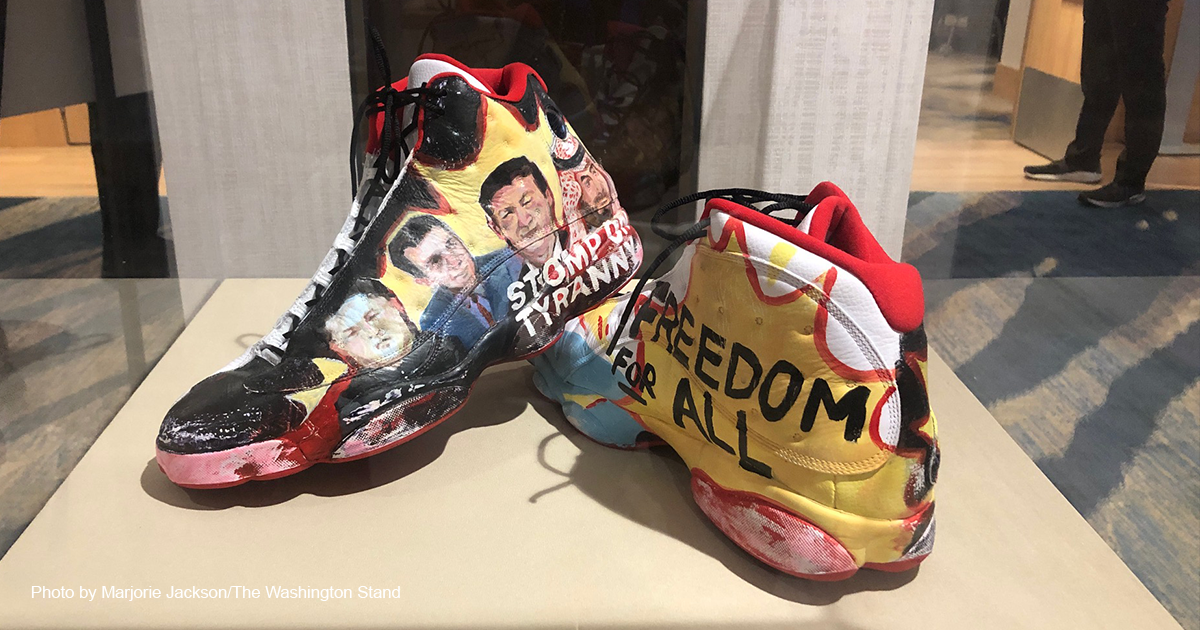 On Wednesday, several pairs of Enes’s “Freedom Shoes” were on display at the International Religious Freedom Summit in Washington, D.C., one set featuring the world’s dictators with the words “Stomp on tyranny!” spelled in white letters. Kanter Freedom explained to Jackson that when he was a kid, “whenever I watched an NBA game, the first thing I was looking at were the shoes — what color [they were], what brand it [was] … So I wanted to create these shoes where I was going to inspire millions of kids out there.” Working with artists who’ve been “oppressed by their government,” he says he tries to tell their stories. “It became a huge trend, and that definitely got a lot of attention.”

Not all of it good. Enes’s stance hasn’t just made teams reluctant to sign him, it’s also exacted a price on his immediate family. His dad, a scientist, was fired from his job and held in Turkish custody. His sister, a medical student, can’t find a job. His little brother, also a basketball player, was kicked off his team. “And the Turkish government … sent police to my house, and they raided the whole house, [taking] every [piece of] electronics away… They revoked my passport, put my name on the Interpol list. And that was just for [speaking up about the corruption] in Turkey.” Calling out the NBA’s cozy relationship with China was something else entirely.

“All of these owners pretend they care about social justice,” Kanter Freedom told a group of Republican lawmakers earlier this month. “But all they care about is money and business.” So when he chose to “be the voice of all of these innocent people who don’t have a voice,” the NBA — who’s been all too willing to go along with China’s brutal and dehumanizing policies for the big market it represents — threatened his career. “They said, ‘Enjoy this year. Enjoy your last year.’”

To Enes, though, it was never about his career. It was about doing the right thing. “Whenever I’m done with my career, my one goal was, when I look back, I wanted to look back and see [that] I did not really care about… how many points I averaged, or how many rebounds… The one thing that I care about [was] how many lives have I changed?” he said. “How many hearts [have I] touched? Or how many kids [did] I inspire? …We have to educate our kids. And so, that is definitely my number one motivation.”

One way Kanter Freedom plans to do that is with his new foundation, which he officially launched last week. “Unfortunately, when you look at some of the countries around the world,” he explained, “there is no freedom of speech, religion, expression of protest. … In some countries out there … like China … when you live your religion freely, then you will be in jail the next day.” And yet, the same NBA that prides itself on activism and progressive values looks the other way.

While millions of Uyghurs go to bed every night “preparing for death at any moment,” the NBA sits in its self-righteous palace, unmoved by the stories of gang rape, live organ removal, child sodomy, medieval torture, forced sterilization, and other inhumanities. It’s why Enes insists the league “is the most hypocritical organization in America.” If they want to blackball him for it, fine. As he told Jackson, the important thing is “to stand up for what you believe in, even if it means sacrificing everything you have.” People can call him crazy to lay his career on the line for two million Uyghurs he’s never met, but as far as he’s concerned, “This is bigger than [me]. This is bigger than basketball — and this is bigger than the NBA.”

“So I think to all the athletes out there watching this, they need to stand up for the right things — even if it affects their business or their endorsement deals or their next paycheck. Because when you worry about your next paycheck, on the other side of the world, people are losing their lives, losing their loved ones, and losing their homes. We definitely need to have some morals, values, and principles.”