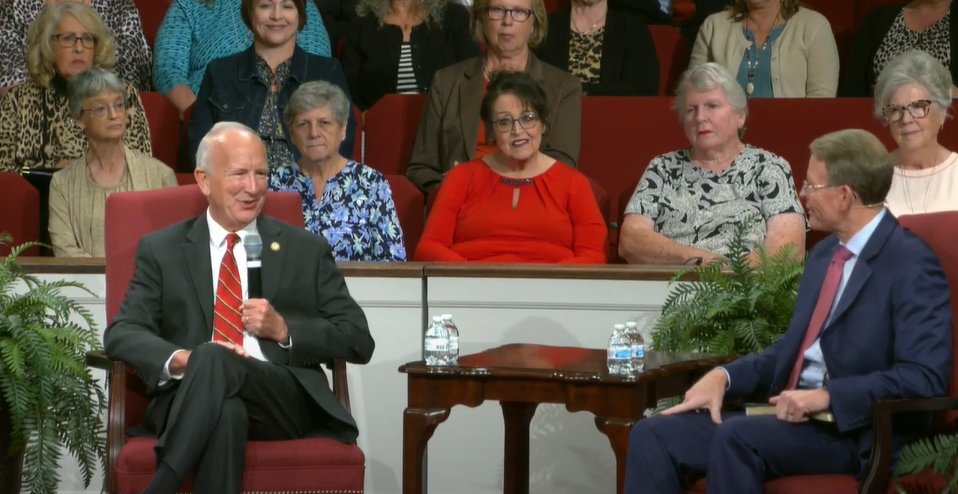 As North Carolina becomes an increasingly critical battleground state three weeks before the midterm elections, Family Research Council hosted a Pray Vote Stand event on Sunday evening at Trinity Baptist Church in Mooresville, North Carolina. At the event, Chief Justice Paul Newby of the North Carolina Supreme Court underscored that human rights are bestowed by God, that judges are not “elected to be kings,” and that all Christians are called to the “public duty” of praying for their country and voting for biblical values.

During his conversation with Newby, FRC president and event moderator Tony Perkins noted that secular culture frowns on “bringing [the Bible] into discussions about what happens in public. But the Bible has a lot to say about the character of judges and what we should be looking for in judges.”

Newby concurred. “[In] Exodus 18, Moses’s father-in-law gave him some very wise advice. He said, ‘When you choose leaders, they need to be capable based on their education, training, and experience. They need to be people of integrity.’ … But most importantly, it says they need to be individuals who fear God. Why is fearing God important? Well, the fear of the Lord is the beginning of wisdom. And so when we go to assess candidates who are running for public service, it’s vital that we ask ourselves, ‘Has this person shown in their lives that they are someone who understands walking in the fear of the Lord?’ It seems to me that the fear of the Lord helps us walk with humility.”

Perkins went on to observe a growing trend in legacy media that refers to Christians involved in politics as “Christian nationalists” because they are “trying to impose some kind of biblical standard on our nation. But the North Carolina Constitution speaks very clearly about morality [and] biblical truth.”

Newby agreed. “The preamble to our state constitution begins this way … ‘The people of the state of North Carolina, are grateful to Almighty God, the sovereign ruler of nations, for the preservation of American Union and the existence of our civil, political and religious freedom, and acknowledging our dependance upon God for the continuation of those blessings to us and to our posterity.’

Perkins asserted that the use of the term “Christian nationalism” is an effort to suppress Christians from participating in elections, because “we are now living in a time when every vote matters.”

“I earned my nickname ‘Landslide’ easily,” Newby joked. “I ended up winning the election for Chief Justice in 2020 by 401 votes out of 5.5 million. That’s 0.007%. … [I]t was the closest race in North Carolina history with regard to a statewide race. And just imagine if 400 folks had decided, ‘Well, you know, I’ve got other things I need to do today.’”

Newby went on to share how he felt called to file to fill a vacant seat on the North Carolina Supreme Court in 2003.

“1 Timothy 2 says, ‘We’re to pray for those in authority over us.’ Well, to what end? ‘That we can live quiet and peaceful lives and all godliness and holiness.’ That’s religious freedom. God didn’t want anybody to perish. ‘But all should come to know Him because there’s one God and one mediator between God, man, the Lord Jesus Christ, who gave himself a ransom at just the right time.’ That’s freedom of speech. That’s our ability to go and share. And as I prayed that God would raise up people, I had this sense, ‘Well, what about you? Are you willing to do it?’ I’m like ‘No.’ ... But God paved the way.”

So why are judicial races becoming so competitive, with ever increasing amounts of money being spent on them?

“What’s happened is judges are swerving over into the legislative lane and making policy determinations and policy decisions as opposed to leaving that to we, the people,” Newby explained. “We need judges who are humble, who understand that nobody elected them to be king, that they are simply there to apply the law as intended and allow the process to work. The public square is not neat and tidy often, but the public square is to be protected for us to vocalize our own worldview, which for us would be a biblical worldview and allow those ideas to compete freely in the public square. Because as we know, that’s truth, and we need to stand for the freedom for that.”

He went on to warn what can happen when judges are expected to interpret the Constitution: “Once we give that responsibility of judges interpreting the Constitution, you’ve got to ask yourself, ‘What are the constraints from them just imposing their views and calling it [the] Constitution?’ The only constraint that I’ve been able to find is self-restraint. … [We need judges who have] that fear [of] the Lord and are humble before him, allowing whatever the process to be, allowing the process to work.”

Newby further elaborated on the calling that he believes Christians have in a free republic. “As I talk to my brothers and sisters of faith, we are called to pray. We are called to vote, rendering to Caesar what is Caesar’s and to God what is God’s. We belong to God. We give ourselves to him. And when we do so, then when we do our public duty, we vote and we stand.”