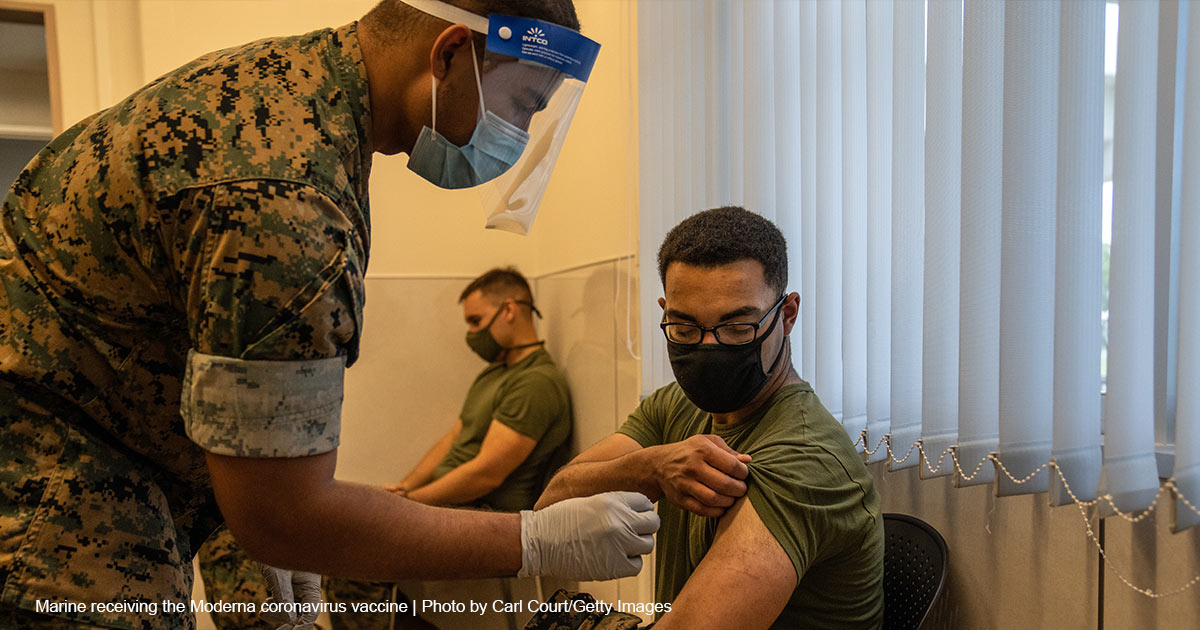 In a major setback for the Biden administration’s vaccination mandate, a federal judge has ruled that military brass cannot punish any Marine who refuses to receive the COVID-19 vaccine for religious reasons.

U.S. District Judge Steven Merryday, an appointee of President George H.W. Bush, granted a preliminary injunction to the thousands of Marines denied a religious exemption to the shot while the case percolates through the judicial system. Last August 24, the Biden administration announced the Marine Corps mandate, which required active-duty Marines to be fully vaccinated by November 28, 2021, and members of the reserves to follow suit by December 28. No active Marines received an exemption, noted Liberty Counsel, a religious liberty watchdog which brought the class-action lawsuit.

“U.S. Marines who filed for religious exemption and were denied, at least at the first level, are now protected,” Mat Staver, the founder of Liberty Counsel, told “Washington Watch” guest host Joseph Backholm on Monday. “They cannot be forced to take the shot against their sincere religious objections. They cannot be intimidated, coerced; they cannot be discharged, and they cannot be harassed in any way at all.”

Merryday noted the Biden administration had been excessively restrictive, issuing a near-blanket denial of all claims issued under the 1993 Religious Freedom Restoration Act (RFRA). “The Marine Corps has granted only 11 accommodations, less than three-tenths of a percent (0.295%) of the 3,733 applications. The record presents no successful applicant other than a few who are due for retirement and prompt separation,” wrote Merryday in his 48-page ruling.

The judge strongly implied that Biden officials had decided in advance to refuse any religious accommodation, a blatant violation of Marines’ freedom to express their religion. “Is it more likely than not — in nearly all 3,733 cases — that no reasonable accommodation was available?” Merryday asked. “One searches without success for a wholesome hypothesis that both accounts for these facts and complies with RFRA.”

Since “the record reveals the substantial likelihood of a systemic failure by the Marine Corps to discharge the obligations established by RFRA, a classwide preliminary injunction is warranted.”

That means much of the military may continue to exercise the right to religious liberty that its members fight to defend. “There are now classwide protections for the members of the Navy, the Air Force, [and] Space Force. The most recent one is the United States Marines,” said Staver. “We’re working now to finish out the six branches with the Coast Guard and the U.S. Army.”

Staver detected sinister motivates behind such a lopsided record. “At this point, it makes no sense legally, logically, or rationally for the military to continue these COVID shots,” Staver argued. “They’re doing it not because of health or safety, but to try to purge the men and women who are Christians and people of faith from the service,” Staver told Backholm.

“We have had a persistent pushback from the Biden administration and his Department of Defense. And then that boils down to the brass of the various military acting as though they’re above the law.”

That created serious issues for enlistment, as the military continues to miss its recruitment goals. “There is a real serious military readiness problem being created by the Biden administration,” said Staver. “These are honorable men and women in all branches of the government that love God, love America. These are the kind of people we want in the service. These are the kind of people that Biden wants to purge from the military. We’re not going to stand for it whether they are in or out. We’re going to fight for them to get justice.”

Many pro-life Americans refused to take the COVID-19 vaccines available in the United States because of their use of fetal cells derived from abortion in the testing or production stages. The Johnson & Johnson vaccine was designed, developed, and produced using the PER.C6, a cell line derived from an abortion performed in 1985. Modern and Pfizer each tested their vaccines on the HEK293 cell line fetal kidney cells derived from an 1973 abortion.

The Biden administration pushed back that military orders flow down from the commander-in-chief and cannot be adjudicated. But Merryday highlighted the fact that the president’s orders must be bound by law, including RFRA. “When Congress acts to preserve liberty, especially a liberty historically and constitutionally fundamental to the United States, the courts — the intended preserve of liberty — must not evade or equivocate, must not, so to speak, sacrifice the fundamental right of thousands of privates to Free Exercise in order to gratify the preference of a few generals,” Merryday added. “The military must acquiesce to the command of Congress and the [p]resident.”

Staver noted that the faithful religious Marines had risked discharge, court-martial, and termination from the USMC. The ruling offers them protection that is “strong,” “powerful,” and “exceptionally broad.”

Staver said he believes the legal process will make the temporary legal protections permanent. “We’ve never lost a preliminary injunction on this particular issue so far, and I anticipate that this will become permanent,” he said. “I have no doubt we will win this.”