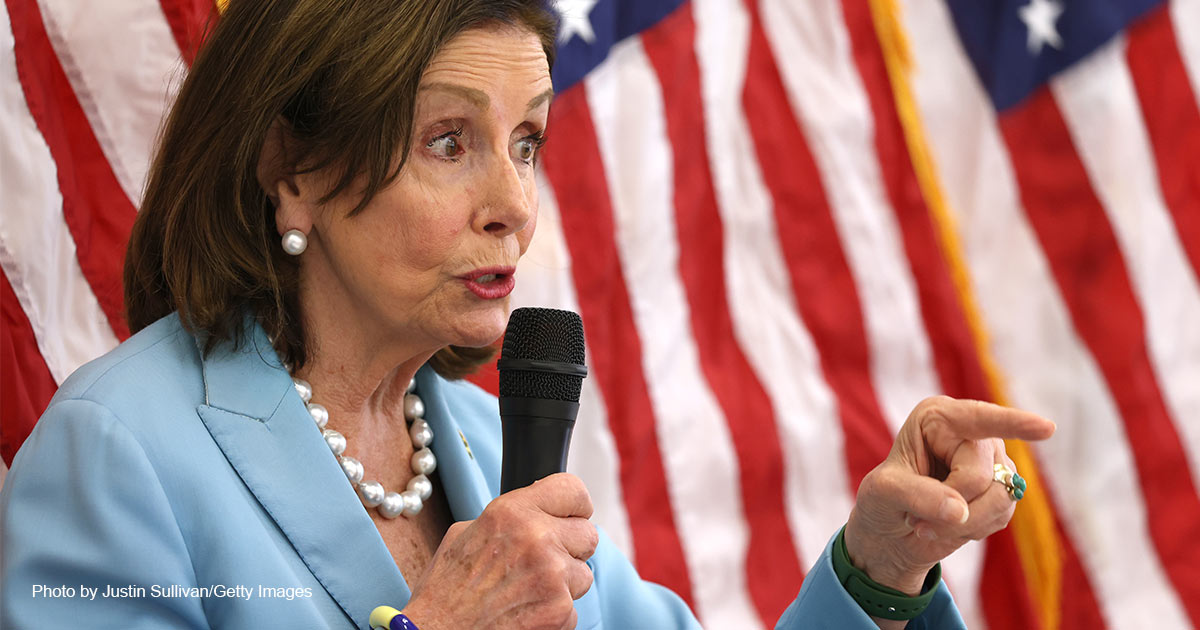 “It’s wrong that [people] would be able to say to women what they think women should be doing with their lives and their bodies. But it’s sinful, the injustice of it all.”

House Speaker Nancy Pelosi (D-Calif.) remarked on the “sinfulness” of restricting abortion last Friday when she joined Democratic Rep. Jackie Speier (Calif.), a House Pro-Choice Caucus member, for a “reproductive health” roundtable discussion with several doctors at the University of California in San Francisco. “A day where we’re here to [talk] about women’s freedom,” Pelosi opened her Women’s Equality Day address, “women’s freedom to vote, as the amendment to the Constitution provided, women’s freedom to make their own decisions, their health care decisions, and that will be part of our discussion today …”

“We take pride in California’s leadership on reproductive health … A beacon of hope and refuge in a time of widespread fear. Emboldened by the radical Supreme Court, extreme MAGA Republicans are inflicting unimaginable pain on women and their families …”

The speaker continued, “But one word that pervade through all of the discussion was the word ‘justice.’ The fact that this is such an assault on women of color and women — lower income families — is just sinful. It’s sinful. It’s wrong that they would be able to say to women what they think women should be doing with their lives and their bodies. But it’s sinful, the injustice of it all.”

“The idea of Nancy Pelosi being the arbiter of what is sinful is laughable at best and insulting to people of faith at worst,” Family Research Council’s Joy Stockbauer, a policy analyst with the Center for Human Dignity, commented to The Washington Stand. “In California, the state that she represents, abortionists can end the life of an unborn child up until the moment of birth. If she wants to talk about sin, that would be a great place to start.”

As for women’s rights and equality being suppressed through lack of abortion access, Stockbauer disagrees, stating, “The pro-life movement cares deeply about mothers and their babies and wants to give both the support they need to flourish and thrive as respected members of the human race — no deceit or manipulation necessary.”

Pelosi’s California is one of 14 states that lists the “health of the mother” as legal grounds for an abortion, with health being defined to include “mental and emotional health.” In 2017, the Guttmacher Institute approximated that over 130,000 abortions were carried out in the state, though official statistics are hard to come by, since California does not report data.

Though a self-identifying Catholic, Pelosi has continually and openly championed issues that are at odds with the her church’s teachings. This past May, the Archbishop of San Francisco barred the speaker from participating in communion due to her staunch support of abortion. The official notification read, “Christians have, indeed, always upheld the dignity of human life in every stage, especially the most vulnerable, beginning with life in the womb. … I am hereby notifying you that you are not to present yourself for Holy Communion and, should you do so, you are not to be admitted to Holy Communion, until such time as you publically repudiate your advocacy for the legitimacy of abortion and confess and receive absolution of this grave sin in the sacrament of Penance.”

Despite the official prohibition, she did take communion at the Vatican in June.

David Closson, FRC’s director for the Center for Biblical Worldview, says Pelosi is missing the mark when it comes to the definition of sin. “Nancy Pelosi is redefining what the word sin means in Christian theology. A sin is an offense against God, against God’s law, against his eternal law.”

Closson explained to TWS that Pelosi’s definition of sin does not line up with Christian traditions or Scripture. St. Augustine defined the word, saying, “Sin is an utterance, a deed, or a desire contrary to the eternal law,” and 1 John 3:4 reads, “Everyone who makes a practice of sinning also practices lawlessness; sin is lawlessness.”

“When you listen to what Nancy Pelosi said, she fundamentally doesn’t understand how the Bible and how her own church understands what sin is, which is a violation of God’s decreed, revealed law. She is a practicing Catholic, and the Catholic Church has actually said that it is a sin to get an abortion. So, it’s topsy-turvy, standing up morality on its head. It’s calling good what is evil, and evil what is good. Sin is lawlessness, a violation of God’s will, whereas Pelosi is calling sinful [that] which is actually in accord with God’s will, which is the protecting of human life.”