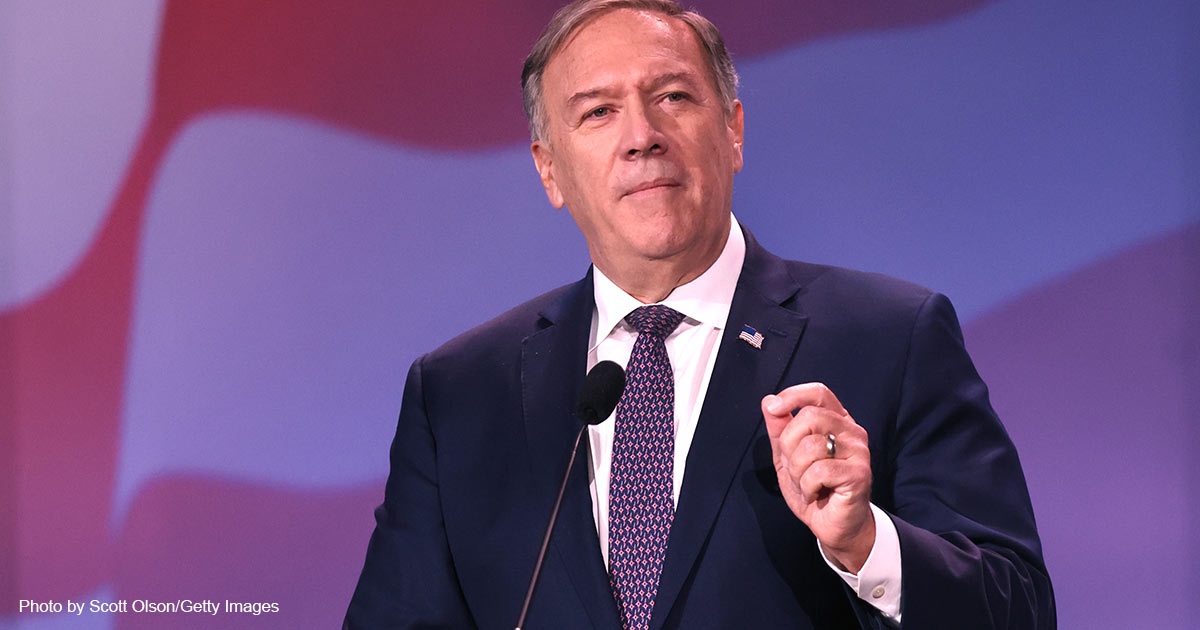 Pompeo: We Can’t Get China Wrong

His old boss told him to “shut up” about China, but former Secretary of State Mike Pompeo has done anything but that in his two years out of government service. Xi Jinping’s country has constantly been on the radar of the one-time CIA director, who said in a new interview with Family Research Council President Tony Perkins that China is the “one external threat that can change the way we live in America.”

Pompeo, who’s the only American to have served as both head of the CIA and secretary of State, has been laser-focused on China for the past several years, warning about everything from the country’s controversial land buys to the Chinese Communist Party’s troubling influence in higher education. He sounded that alarm as recently as this week, telling an audience at a New York Sun event that “no American university would exist today” without Chinese money and suggested that “the 360,000 Chinese students currently studying at those universities… were a point of leverage and information for the Beijing regime.”

Xi, Pompeo insists, is “the most dangerous man in the world,” a fact the new conservative House majority is already taking quite seriously. In a surprise move, GOP leadership (with the help of 146 Democrats) voted to establish an entire bipartisan committee dedicated to study and investigate the communists’ economic, technological, and security advantages.

“I’ve heard my colleagues on both sides say that the threat posed by Communist China is serious. I fully agree,” Speaker Kevin McCarthy (R-Calif.) said at the time of the resolution. “This is an issue that transcends political parties. And creating the select committee on China is our best avenue for addressing it.”

Congress will have plenty of fact-finding to do, especially with the explosive allegations that China is operating secret police outposts in cities all across the U.S. to monitor their population overseas. “We are aware of the existence of these stations,” FBI Director Christopher Wray told senators last fall. “To me is it outrageous to think that the Chinese police would attempt to set up shop in New York, let’s say, without proper [legal] coordination. It violates sovereignty and circumvents standard judicial law enforcement cooperation.”

Just this month, the FBI stumbled on one of the 100 “off the books” outposts believed to be in the U.S. It is, Wray insists, part of a troubling pattern of the Chinese government “exporting their repression right here in the U.S.” “We’ve had now a number of indictments as you may have seen of the Chinese engaging in uncoordinated law enforcement actions right here in the United States, harassing, stalking, surveilling, blackmailing people who they just don’t like or disagree with the [Jinping] regime.”

Even North Korea Dictator Kim Jong Un is in China’s clutches, Pompeo told Perkins. In his visits there, which Pompeo talks about in his new book, "Never Give an Inch," the former secretary said that “it became very clear that he wasn’t his own man — that he was working at the behest of Xi Jinping in the Chinese Communist Party. Every time we would meet with them, he would go to Beijing both before and after our meetings.”

Ultimately, that translated into Kim Jong Un walking away from the nuclear deal, because he didn’t “have the degrees of freedom that he hoped he would” to negotiate with the U.S. The two sides never could agree to a framework, and “I think it was because his instructions he received from the Chinese Communist Party,” Pompeo explained.

And when it comes to religious freedom, “we know there is no darker place than China,” Pompeo agreed, pointing to the genocide of the Uyghurs and other persecuted religious minorities. “We have an enormous amount of religious freedom here,” the secretary insisted. “We have our First Amendment. We have a surveillance state that is unique compared to what the Chinese Communist Party has, and we have creativity and ingenuity. China wants to undermine every one of those things.”

And so, he warned, “if we get this one wrong, they have the scale — 1.3 billion people. They have an economy that is first- or second- or third-biggest in the world. This is truly something that impacts us right here at home. They’re trying to buy land in the United States adjacent to American military facilities, and we’ve let them do that for too long. These are the kind of things we should push back on. And when we do … [Xi’s] not 10 feet tall. We’ll defeat him. But it’s going to take a determined America that doesn’t let them walk all over us for the next 50 years the way we did for the last 50 years.”