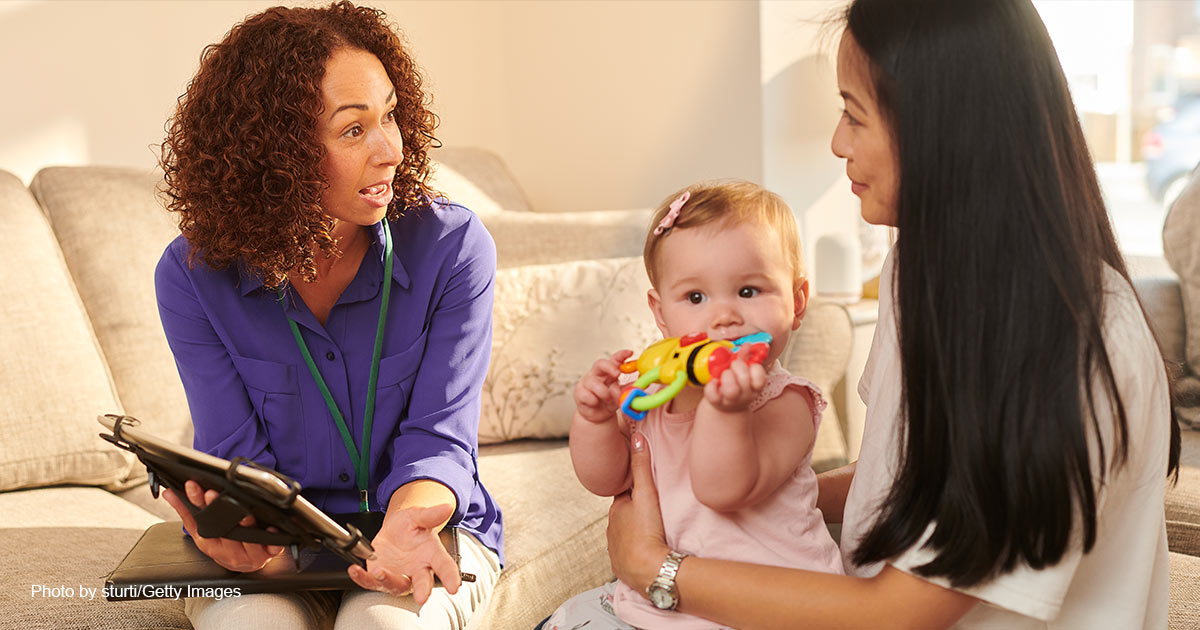 Preparing for an Unplanned Baby Boom: Adoption in the Post-Roe Era

In the spring of 2021, marketing professionals Michael and Bernadette Bobrowski decided to begin the adoption process following five years of unsuccessful fertility procedures. The young couple residing in Maryland were fortunate to have friends and family who were adoptive parents to guide them. But for many, the process of adopting a child is elusive.

According to Adoption Network, approximately 135,000 children in the United States are adopted annually. Apart from stepparent adoptions, around 59% are children from the foster system, 26% are international adoptions, and 15% are voluntarily relinquished American babies.

At the moment, only 4% of women with unwanted pregnancies place their children for adoption. But with the recent overturning of Roe v. Wade, social workers at pregnancy resource centers expect this number to increase due to a potential post-Roe unplanned baby boom. With this possible rise in domestic infant adoptions, a pertinent question has emerged: Is America prepared for a plethora of adoptable babies?

Becky Sheetz, the executive director of First Care Women’s Health in Manassas, Va., shared that many of the women she serves who have unplanned pregnancies have a very limited understanding of adoption, and she sees it as her role to inform them of their options.

“Most often what you hear is, ‘Oh, I could never give my baby away.’ And I’ve learned we had to address that and explain, ‘Adoption isn’t giving your baby away, it’s making an adoption plan like you would make a parenting plan.’”

In 1851, the Adoption of Children Act became the first modern adoption legislation enacted in the United States. Adoption being in the best interest of the child and adoptive parents being required to have the “ability to furnish suitable nurture and education, appropriate to the child’s nature” are some of the precedents originally set in Massachusetts that are still in effect to this day.

Domestic infant adoption is the voluntary and permanent placement of a baby for adoption by their birth mother. In this type of adoption, the birth mother selects the adoptive family with whom the child will be placed.

Adopting an infant in the United States can either be done through an agency or independently. State laws around adoption vary and often influence where individuals decide to adopt children from. The Bobrowskis decided to adopt through an agency in Texas despite residing in Maryland.

“We did discern to not adopt within Maryland because Maryland has a 30-day relinquishing period where the mother can choose within the first 30 days whether or not to take her child back,” Michael told The Washington Stand. “It’s good for the baby. But for us, it was something that was difficult to sort of imagine. So we chose an agency in Texas, actually, because they have a 48-hour relinquishing period.”

Alternatively, in closed adoptions, there is no contact or exchange of information between both parties. Semi-open adoptions cover any situation that is not entirely closed or open. This often involves trading non-identifying information and having limited contact that is mediated by an adoption specialist.

Hamilton, Mich. residents Keri Boeve and her husband opted to have an open adoption for their two sons.

“We’re friends with their birth mother on Facebook and she can contact us whenever she wants to,” said Boeve, who works for Family Research Council. “I think one of the benefits of an open adoption is it allows the birth mother to see that her child is growing well in a safe home.”

“Once you start the process, it can be really lengthy and intense,” Michael Bobrowski shared.

“Tons and tons of paperwork is involved, [so] he [Michael] really was and has continued to be like our point person for receiving information, keeping things organized,” Bernadette said.

Apart from submitting documentation, a process that can take months to complete, the couple must have a home inspection. This is when a social worker visits the adoptive parent’s home to ensure that it is suitable and safe for a child. In preparation for this, the Bobrowskis had to childproof their home in October last year. This included getting a fire extinguisher and installing a safety lock box and smoke detectors as well as having their water inspected.

Once the home is approved, the interviewing stage commences, which gauges the preparedness of the parents and the child’s potential living environment. Initially, the Bobrowskis had a social worker interview them via Zoom. Later on, they met with an adoption agency representative separately for a 45-minute interview where they were questioned about everything from parenting style to financial habits.

She shared that this part of the adoption process is emotionally taxing and she is grateful to have her husband to lean on for comfort. The couple also had relatives and friends speak to the adoption agency to vouch for their good character.

The Bobrowskis had finalized their home study and were deemed an active adoptive family in February 2022. They joined an estimated two million families who are currently waiting to be paired with a child. The time period that a family waits varies drastically depending on the cases available.

“There’s so many families that want to adopt and these moms just need to know that there’s someone out there who will love their child,” Bernadette said.

Alternatively, the Boeves waited only two months before they were paired with a birth mother and brought their sons home.

“It was very fast,” Boeve recalled. “We had to set up the nursery and purchase all the baby items quickly, but we are very grateful to have our boys.”

Bernadette and Michael are still waiting. They have an online profile set up for the placement agency to connect them with a birth mother. It could take anywhere between one to five years to finalize an adoption.

“When our first case came around, we were excited because it kind of matched our sort of discernment of who we’re looking for,” said Bernadette. “But then we just found out the mom decided on another family. I think the consoling, hopeful thing throughout it all is just knowing that there’s a child that God has in mind for us specifically.”

Among the bills Kemp signed was House Bill 114, which increased the tax credit for families that adopt a child from foster care from $2,000 to $6,000 per year for five years. Another measure, House Bill 154, lowered the age at which Georgians can adopt children from 25 to 21, making it easier for older siblings to adopt their younger sister or brother. A further notable bill was Senate Bill 107, which waived in-state tuition for foster and adopted students whose families receive adoption assistance from the state.

At the bill signing ceremony, Kemp told reporters, “By making it more affordable to adopt, reducing bureaucratic red tape and championing the safety of children across our state, we can ensure that Georgia’s children are placed in those homes.”

It remains to be seen whether Georgia’s efforts will increase adoptions and lower the amount of children in foster care, and if other states will take similar measures in an effort to promote adoption.

Mary Beth Waddell, director of Federal Affairs concerning family and religious liberty at Family Research Council expressed concern over the issue of faith-based adoption and foster care agencies being discriminated against by state regulators because of the agencies’ beliefs regarding marriage and sexuality.

“In post-Roe America, adoption is more critical than ever,” she told The Washington Stand. “Sadly, we have seen repeated and consistent attacks on faith-based adoption and foster care agencies for more than a decade. Some of these organizations have been doing the work of caring for children in need for as long as a century. Some of these agencies have won awards for their outstanding work. We must have as expansive and diverse a system as possible to properly serve the women, children, and families in need.”

“The government should not mandate a one-size fits all approach that imposes a radical ideology on those that wish to help their communities,” Waddell continued. “Faith-based agencies should not be forced to either sacrifice their First Amendment rights or leave women and children in need.”

She went on to note that the religious beliefs of birth mothers placing their children for adoption should never be ignored.

“Adoption is a wonderful thing, but a difficult road to walk,” Waddell observed. “Birth mothers must be able to find a place where they feel safe, heard, and loved. Many desire a faith-based agency to help them walk through one of the most difficult times in their lives. They know they need spiritual help in addition to practical resources and assistance. Also, many desire to place their child in a religious home. The government should not make things more difficult for these women by stripping away the resources they need or, at the very least, making them harder to access.”

The Future of Adoption

Bernadette Bobrowski expressed optimism about the outlook for adoption in the U.S. going forward. “I think America is ready to receive babies that would otherwise not have a chance at life,” she told TWS. “So I think it’s a huge gift to be able to be a family that could welcome another little one that wouldn’t otherwise have a chance.”

Challenges still remain in the battle to curb ignorance about adoption with education. In speaking with various pregnancy centers, unfamiliarity both from birth mothers and families regarding the adoption process was a recurring theme, which will add difficulties to making adoption a more accessible and feasible option in the post-Roe era.

Susan Gallucci from the Northwest Center in Washington, D.C. offered insight into the role birth mothers have in the adoption process. In her position as the executive director of a pregnancy resource center, Gallucci works to empower women by informing them that have the ability to choose who their child is raised by and where they live.

“I know a mother who in different training sessions said she really loved horses. And she made an adoption plan for her child to be with a family who had a horse farm,” Gallucci said.

Gallucci recognizes that sometimes mothers are afraid to place their child for adoption because they fear that their child may end up with an abusive adoptive family.

“I think we hear on the news about some horrific case of kids who were adopted or in foster care who were locked in the basement and starved,” said Gallucci. “These sensational stories, they do happen every once in a while, but they’re rare. But they stick in your mind because they’re so egregious, so letting [birth mothers] know how thorough the adoption process is with home visits, medical checks, and background checks [is important].”

In addition to education, the effort to make adoption more affordable so that it can be a viable option for most middle-income families poses a significant challenge. The cost of adopting a newborn in the U.S. can reach up to $45,000 or more.

For the Bobrowskis, they count themselves fortunate to both be working well-paying jobs in order to afford all the medical expenses, legal fees, and travel costs that come with adopting. But even they say it would be extremely difficult to adopt more than one child given how expensive the process is.

Some argue that state laws should focus on making adoption more financially feasible so that more families would consider adopting a child, while others say a more cautionary approach should be taken to ensure that children are not placed in financially unstable homes. Ultimately, it seems likely that legislators and adoption agencies will need to continue partnering to ensure that adoption becomes an increasingly viable and attractive choice for Americans in this post-Roe era.