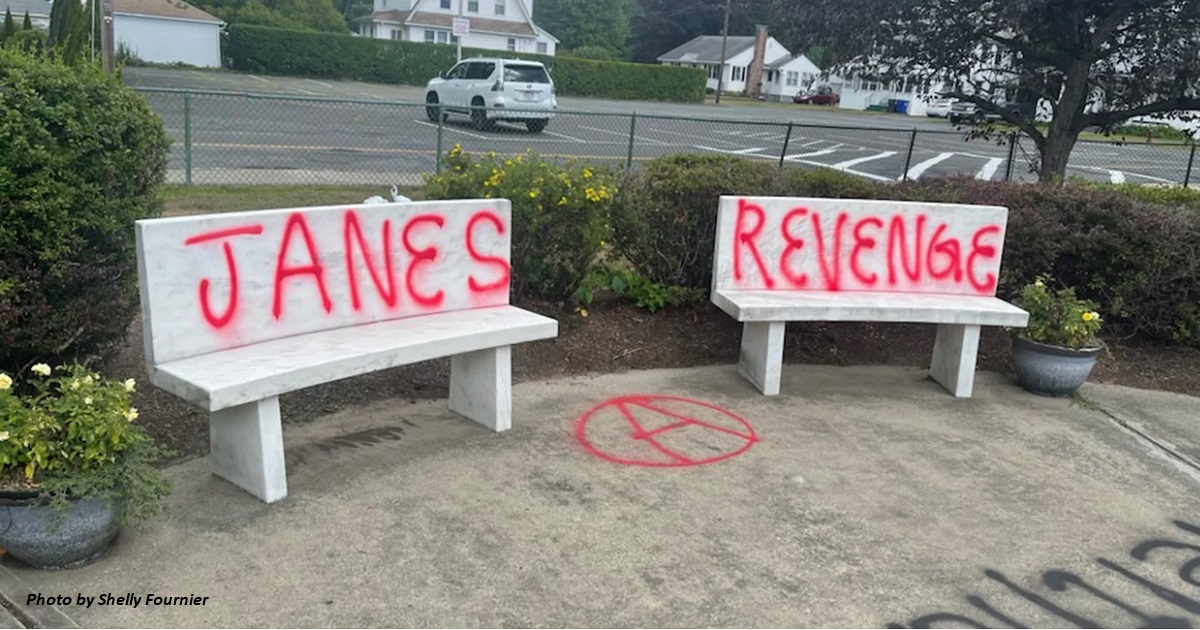 A vandal used black spray paint to write this message on the ground outside the pro-life center: “If abortions aren’t safe, neither are you!”

Someone also wrote the words “Janes Revenge” [sic] in red paint on two white marble benches outside the center.

Jane’s Revenge is a militant pro-abortion group that advocates vandalism, firebombing, and other acts of arson at targets that have included crisis pregnancy centers and churches.

The Easthampton Police Department confirmed the attack on Bethlehem House, telling The Daily Signal that the incident is the subject of an “ongoing investigation.”

Bethlehem House, founded in 2006, is “a nonprofit, faith-based organization that provides confidential services to pregnant women and men in need,” the website for the pregnancy center says.

The pro-life pregnancy center in Easthampton does “amazing things,” Shelly Fournier, who lives within two blocks of Bethlehem House, told The Daily Signal.

“I don’t know what kind of person would try to target somebody that’s helping newborn mothers with needs,” Fournier said. “I’m a mother myself, and I just can’t believe anybody would do that to them.”

Police officers knocked on her door asking for access to her security camera footage in hopes that one of the cameras outside her home captured images of the vandals.

Bethlehem House is not the first pro-life center in Massachusetts to be targeted by pro-abortion vandals.

Jane’s Revenge reportedly was behind vandalism in July at Clearway Clinic in Worcester, 47 miles west of Boston.

In that incident, security cameras showed two individuals using a hammer to break the pro-life pregnancy center’s doors and windows. Someone spray-painted the words “Jane’s Revenge” on the ground outside the front doors.

“The vandalism must be publicly condemned by our state legislators,” Michael King, director of community alliances for Massachusetts Family Institute, told The Daily Signal, adding: “We haven’t heard anything from state legislators on this issue.”

U.S. Sen. Elizabeth Warren, D-Mass., told reporters July 12 that pro-life pregnancy centers should be shut down, not only in her state but across America. Warren said:

Warren is “culpable, she’s responsible,” King told The Daily Signal, adding: “Her words have encouraged … domestic terrorist groups like Jane’s Revenge to feel justified in their intolerant and dangerous actions.”

The Daily Signal is seeking comment from Warren’s office.

Jane’s Revenge also is believed to be responsible for vandalism at the Blue Ridge Pregnancy Center in Lynchburg, Virginia.

In that case, vandals left a similar message spray-painted on the ground, writing: “If abortion ain’t safe, you ain’t safe.”

“Anybody who thinks that it’s OK to vandalize a center that’s aimed at helping women [in] their most desperate needs are cowards by every definition,” Virginia Attorney General Jason Miyares said of the Lynchburg vandals in a visit to that center.

Bethlehem House is one of about 40 pro-life organizations to have been attacked since May, when someone leaked the Supreme Court’s draft opinion in the case called Dobbs v. Jackson Women’s Health Organization.

That draft previewed the high court’s official 5-4 decision, released June 24, which ended abortion on demand and returned the question of abortion to Americans and their  elected state representatives.