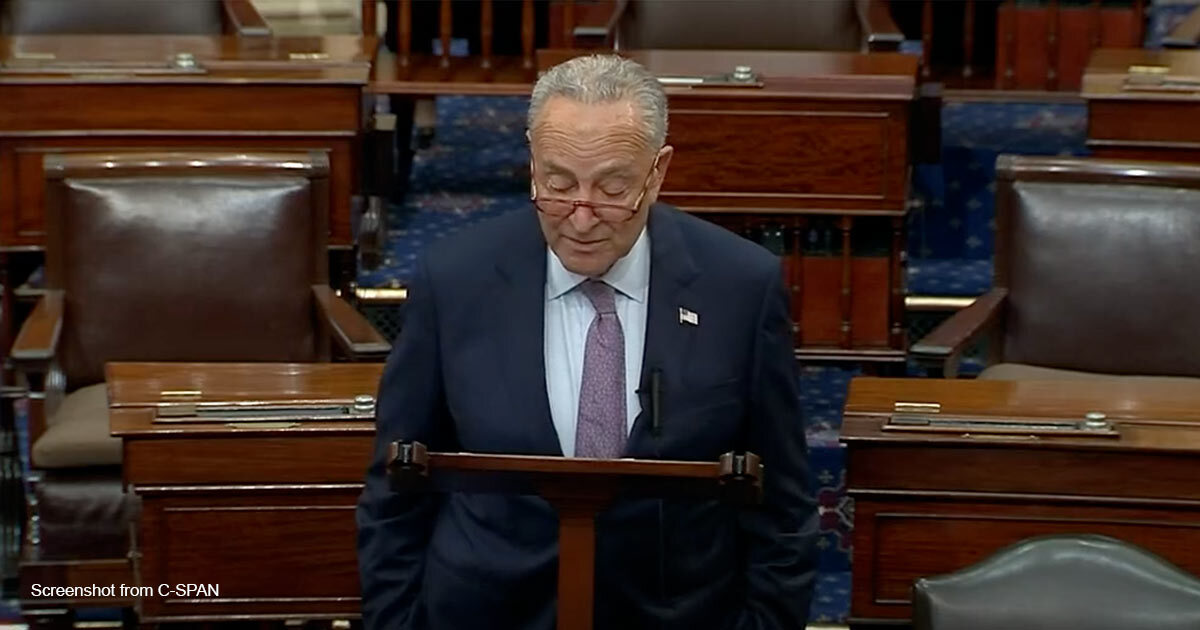 In a blow to religious freedom, the U.S. Senate voted to overcome a Republican filibuster against an amendment to the so-called “Respect for Marriage” Act, clearing the way for the passage of a bill that critics say is “dangerous,” “deceptive,” and “harmful” to Christian businesspeople and nonprofits soon to face legal harassment.

After a two-and-a-half hour vote Monday evening, the Senate agreed to end debate on the supposed religious liberty “fix” to H.R. 8404 by a vote of 61-35, teeing up a Tuesday debate on three crucial Republican amendments. Twelve Republicans joined all Democratic senators present in supporting the bill. (Senator Raphael Warnock, D-Ga., who voted for the bill in a prior vote, skipped Monday’s vote to campaign for reelection against Republican Herschel Walker in next month’s runoff election.) The bill repeals the Defense of Marriage Act and forces all 50 states to recognize any marriage recognized by any other state.

A coalition of senators offered a weak substitute to Senator Mike Lee’s (R-Utah) religious liberty amendment on Monday. Lee’s amendment, which is expected to get a floor vote on Tuesday, offers robust legal protection for believers, stating that the federal government “shall not take any discriminatory action against a person, wholly or partially on the basis of” that person’s views of marriage and let Christians sue if the government violated their rights. “This simple protection would take the tax issue entirely off the table,” assessed Roger Severino, a former Trump administration religious liberty official who is now at the Heritage Foundation, “which is precisely why the bill’s sponsors steadfastly refuse to adopt it.”

In its place, the Senate considered a substitute “religious liberty” amendment from Senators Tammy Baldwin (D-Wisc.), Kyrsten Sinema (D-Ariz.), Susan Collins (R-Maine), Rob Portman (R-Ohio), and Thom Tillis (R-N.C.). Their alternative measure stated that their bill would not “diminish” any religious liberty or conscience protection that already exists “under the Constitution of the United States or [f]ederal law.” Religious institutions and nonprofits “shall not be required to provide services, accommodations, advantages, facilities, goods, or privileges for the solemnization or celebration of a marriage,” it said.

But religious liberty advocates note that nonprofits do not usually take part in the “celebration of a marriage.” And they have already faced discriminatory — and costly — litigation under current law since Obergefell v. Hodges. “This clearly does not protect religious schools like Yeshiva University, which is now being forced by the state of New York to recognize student clubs with charters contrary to the university’s expressed Jewish character and history and despite protections for religious corporations in the New York law,” explained Family Research Council. “It does not protect adoption and foster agencies that help place children in homes with a married mother and father.”

Not only does the bill not recognize the religious rights of private businesspeople to refuse to participate in a ceremony they view as sinful, but it gives aggrieved activists a right of private action to sue Christian business owners. The bill, critics say, will force people who hold to the historical view of marriage as the lifelong union of one man and one woman to choose between living their faith or losing their business.

“The current version of the Respect for Marriage Act being pushed by Senator Chuck Schumer is designed to provide strong protections for same-sex marriage — but it fails to protect those of us who believe marriage is between a man and a woman,” said Rev. Franklin Graham in a Facebook post Saturday. He called the bill “a smoke-screen” and “very deceptive.”

“We desperately need senators to demand the Lee Amendment be added to the current version of the Respect for Marriage Act before it is finalized,” said Rev. Graham.

The nation’s largest Christian church agreed. “The Respect for Marriage Act’s rejection of timeless truths about marriage … would also betray our country’s commitment to the fundamental right of religious liberty,” said the U.S. Conference of Catholic Bishops in a letter to the Senate ahead of Monday’s vote.

Although the bill’s proponents say it “codifies” the Supreme Court’s opinion in Obergefell v. Hodges, which asserted that the U.S. Constitution contains a right to same-sex marriage, it goes well beyond the ruling’s terms. “Obergefell did not make a private right of action for aggrieved individuals to sue those who oppose same-sex marriage. It did not create a mandate for the Department of Justice to sue where it perceived an institution opposed same-sex marriage, but the Respect for Marriage Act will,” Senator Lee and 20 other Republicans wrote to their colleagues.

Cases such as those of Masterpiece Cakeshop owner Jack Phillips, or Aaron and Melissa Klein, show the “Respect for Marriage” Act makes it untenable for Christians to remain in any business that impacts marriage or weddings, its opponents say.

“This legislation does not move the needle in terms of the rights of same-sex couples. They can already marry in every state in the country,” stated Senator John Cornyn (R-Texas). “All it will do is force religious organizations to make an impossible choice: abandon your beliefs or face the wrath of the U.S. government.”

Another section of the substitute amendment says that the federal government shall not deny nonprofits tax-exempt status or any other benefit “which does not arise from a marriage.” But most hostile legal action comes at the state and local level. “To date, at least eight states and localities have taken hostile action toward adoption, foster care agencies, and foster families on the basis of sincerely held religious beliefs or moral convictions that marriage is between a man and a woman,” said FRC. Critics say the phrase “which does not arise from a marriage” is legally ambiguous and invites even more litigation against people of faith.

Religious nonprofits would still face the revocation of their tax-exempt status, legal experts say, because the “Respect for Marriage” Act would establish that the government has a compelling interest in opposing those who do not accept same-sex marriage, according to Severino. The bill would “tacitly vilify millions of Americans who still believe in natural marriage by labeling that belief as ‘sex discrimination’ and tantamount to racism,” warned FRC.

The bill amounts to the United States “explicitly declaring the Bible is wrong,” Rabbi Yaakov Menken, director of the Coalition for Jewish Values, told The Daily Signal’s Mary Margaret Olohan.

While the “Respect for Marriage” Act lacks the support of the nation’s orthodox religious communities, it has earned the backing of drag queens. Andy Spaulding, a Florida drag performer currently rehearsing for an “upcoming Christmas drag performance,” says he “hopes eventually everyone will agree” to pass the bill, according to a southwest Florida NBC affiliate.

At least some of the Republican senators may face a backlash over their lame duck vote. A new poll showed a plurality of voters in five states — Indiana, Iowa, Utah, West Virginia, and Wyoming — do not support the bill, and 70% of Republicans say they want their representatives to vote against it. A majority (53%) of residents in those states oppose the “Respect for Marriage” Act when they learn it could punish individuals who believe in natural marriage; 51% oppose the bill’s provisions that could threaten religious nonprofits’ tax-exempt status. The states’ Republican senators voted for a previous version of the bill, which lacked the religious liberty amendment: Senators Joni Ernst (R-Iowa), Cynthia Lummis (R-Wyo.), Shelley Moore Capito (R-W.Va.), Mitt Romney (R-Utah), and Todd Young (R-Ind.).

Monday’s vote disproved a prediction from one of the bill’s primary supporters: Senator Tammy Baldwin (D-Wisc.) forecasted, “I actually think you’ll see the strength of support grow throughout the debate.” Ultimately, the same “dirty dozen” Republicans joined all 50 Senate Democrats in voting to end debate during a cloture vote on November 16.

In addition to Lee’s proposed changes, a series of religious freedom amendments are expected to be offered Tuesday from Senators James Lankford (R-Okla.) and Marco Rubio (R-Fla.) to correct the bill’s serious deficiencies. A vote on final passage would likely to take place later this week. If the bill squeaks through the Senate in its amended form, it would then return to the House of Representatives before landing on the desk of President Joe Biden, who has promised to sign it.

Tony Perkins, president of Family Research Council, urged voters to keep the pressure on Senate offices. “Republicans clearly acknowledge that this legislation is a threat to the First Amendment or they wouldn’t be pushing for a vote on stronger GOP amendments. What will they do if the final bill doesn’t include them? How will they defend their support for a law that they admit is dangerous to religious freedom?”

The 12 Republican Senators who voted for the “Respect for Marriage” Act are:

The 47 House Republicans who voted for the “Respect for Marriage” Act are: