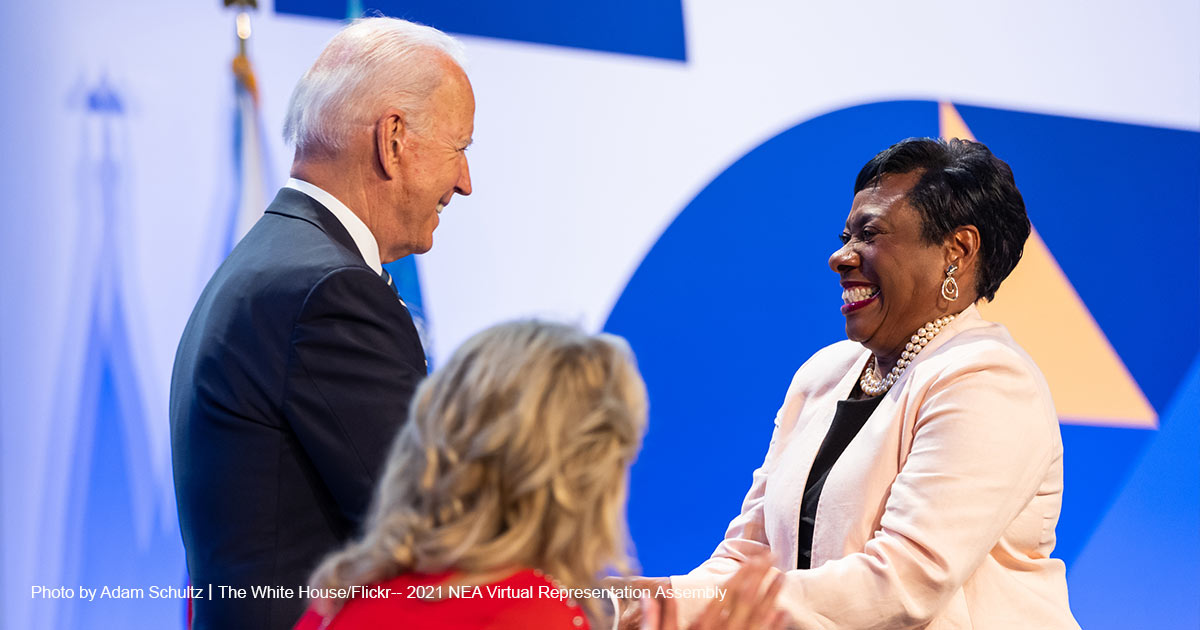 Teachers Union: ‘NEA Will Publicly Stand In Defense of Abortion’

The nation’s largest teachers union voted on Wednesday to defend abortion-on-demand, capping off a politically charged convention that encouraged teachers to “validate” children experimenting with transgender ideology and homosexuality.

By a nearly three-to-one vote on Wednesday, the National Education Association (NEA) adopted a resolution stating the “NEA will publicly stand in defense of abortion and reproductive rights and encourage members to participate in ... rallies and demonstrations, lobbying and political campaigns, educational events, and other actions to support the right to abortion.”

The “NEA is a social justice union that is a majority female and trans and gender non-confirming folx,” said the ”rationale” for adopting this resolution, New Business Item 34. It did not mention any commitment the union may have to educating children.

“This organization has a left-leaning political agenda that they are very proud of and that they will support to the bitter end,” Meg Kilgannon, senior fellow for education at the Family Research Council, told “Washington Watch with Tony Perkins” on Wednesday. “It’s the leftist/progressive political agenda that’s being pushed on children at the expense of their education.”

The controversial resolution, one of many that passed on the final day of the NEA’s 2022 Annual Meeting and Representative Assembly, echoed the priorities outlined by NEA President Becky Pringle in a fiery speech calling on delegates to “fight unceasingly” for a liberal agenda.

“We will fight tirelessly for the right to choose. We will never stop,” she said.

“We will say gay! We will say trans!” she bellowed in a reference to Florida’s “Parental Rights in Education” law, signed by Florida Governor Ron DeSantis (R). The law, which opponents erroneous dub a “Don’t Say Gay” law, merely says teachers may not “encourage classroom discussion about sexual orientation or gender identity” with children before the fourth grade, nor in a way that is not age-appropriate with older students.

Pringle defiantly vowed that teachers “will use the words that validate our students” and “encourage them to walk in their authenticity,” though she did not specify how this would comply with state law.

Unlike in years past, the text of the NEA delegates’ resolutions has been made private, but excerpts have gone public. These include the NEA’s support for minors’ gender transitions and fighting for “intersectionality,” “equity,” and “environmental justice” — concepts culled from critical race theory.

“The NEA will publicize our continuing commitment to LGBT youth and all young people’s right to learn about and develop their own sexual orientation and gender identity,” says New Business Item 41. It does not mention parental consent or notification, a hot-button issue at school board meetings. But the union promises “to take all necessary steps to overturn the ‘Don’t Say Gay’ law in Florida and other homophobic and anti-transgender laws.” New Business Item 63 would replace the terms “mother” and “father” with “birthing person” and “non-birthing person” in the union’s legal contracts. The union also lashed out at the relative absence of gun ownership restrictions and Russia’s invasion of Ukraine.

Pringle also asserted that Supreme Court rulings recognizing the religious liberty of teachers to pray privately “attack religious freedom,” that vouchers “threaten the right to a universal public education,” and that justices chose to “hijack the fundamental freedom” of abortion-on-demand.

“If they’re saying this in public, what are they doing in the classroom?” asked Perkins.

Pringle called on NEA delegates to “build our power” by enrolling everyone “in our righteous cause.”

One person willing to march with the NEA was Vice President Kamala Harris, who claimed DeSantis’ law took “freedom away from a kindergarten-to-third-grade teacher in Florida to love openly and with pride.” Such “extremist so-called ‘leaders’” in Florida and other states where a majority of legislators take stands she disfavors should be forced to sit through civics class “to remember how a democracy works,” said Harris.

The NEA spent $25 million of members’ dues on campaign donations in the 2020 election cycle, overwhelmingly to Democrats. The three-million-member teachers union receives most of its dues from public school teachers, who in turn receive their salary from taxpayers. “What you have here is an elaborate sort of money-laundering operation that’s giving public dollars to left-wing interest groups,” noted Kilgannon.

“This is an incredibly partisan organization that has a lot of muscle, and they use it on behalf of their friends in the Democratic Party,” she said.