After months of denying or downplaying inflation, President Joe Biden has kicked off a 32-day campaign to convince voters that he holds the key to taming the nation’s skyrocketing prices. Biden outlined his economic plan in the Wall Street Journal Monday and reiterated his concerns during a meeting with top economic officials on Tuesday. But experts say his proposals are insufficient to lower costs or to protect the United States from an impending recession.

“The Federal Reserve has a primary responsibility to control inflation,” wrote Biden. During brief remarks with Federal Reserve Chairman Jerome Powell and Treasury Secretary Janet Yellen the next day, Biden promised to “respect the Fed and respect the Fed’s independence … I’m not going to interfere with their critically important work.”

Biden said the Federal Reserve will “address the rising prices for the American people.”

Consumer prices rose 8.3% over the last year, but runaway inflation pushed the cost of household necessities even higher. Energy prices increased 30%. The cost of groceries increased 10.8%, and the cost of eating out rose at the fastest clip since November 1980. “Prices for meats, poultry, fish, and eggs increased 14.3%, the largest 12-month percentage increase since … May 1979,” according to the Bureau of Labor Statistics.

“The worst is yet to come,” Rep. Andy Harris (R-Md.) predicted on “Washington Watch” Tuesday afternoon. “I’ve talked to farmers in my district. They’re telling me that when the crops come in this year, they’re going to be expensive, because the fertilizer is expensive. The fuel is expensive.” 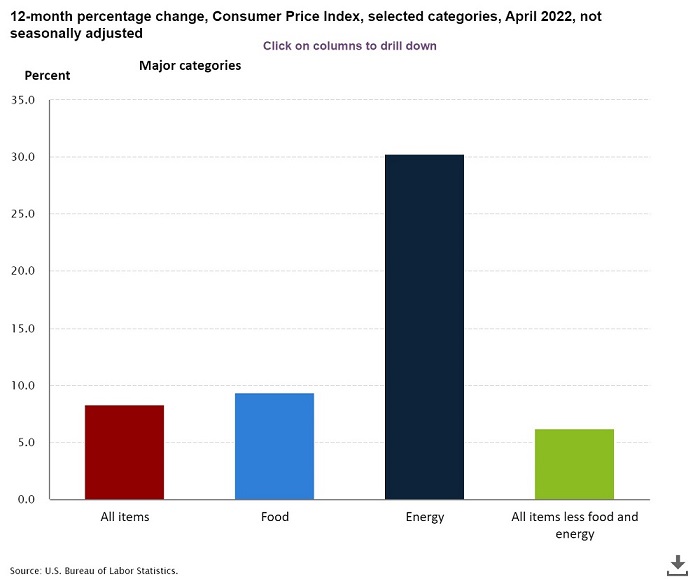 Critics accuse the president of passing the buck and trying to saddle the Fed with the blame for anticipated interest rate hikes. As part of its mandate to control inflation, the Federal Reserve raises interest rates to soak up the excess money in circulation. Earlier this month, the Federal Reserve raised interest rates by half a percent — the first time it had authorized such a large hike in 22 years — and it looks primed to raise rates another half-percent over the summer. Such increases always carry the possibility of triggering a recession.

“I’m really worried about the economy slipping into recession,” said Stephen Moore, a former economic adviser to President Donald Trump who is now a senior fellow at FreedomWorks, later in the show. He’s far from alone. Some 85 percent of Americans believe a recession will break out within the next year.

“The president’s now focusing on the economy, because all of the polling shows [inflation] is a top issue for the American public,” said Family Research Council President Tony Perkins. The center-Left polling website FiveThirtyEight found that voters name inflation as their top concern — with more Democrats than Republicans saying inflation worries them more than any other issue. Fully 87% of all Americans express concern about increasing prices in a Fox News poll released early in May.

Now, the White House promises a public relations outreach aimed at reassuring the jittery public. “For [the] month of June, we are just really communicating how in touch we are with what Americans are dealing with and how it’s our number one economic priority,” a Biden administration official told CNN.

That means more articles like Biden’s op-ed, but “there were a lot of falsehoods in that piece,” explained Moore. He said Biden wrongly claimed credit for “reducing the federal deficit,” when the Biden administration has actually increased the national debt from $21.9 trillion last January to $30.4 trillion today. The extra $8.5 trillion in debt came without passing nearly any of Biden’s signature legislation, such as the $3.5 trillion “Build Back Better” plan and his nearly $6 trillion proposed budget.

“There’s no president in modern times who has increased the debt in his first 15 months in office more than Joe Biden,” Moore pointed out. “It’s actually almost laughable that he keeps claiming that he’s some kind of fiscal conservative.”

While the Congressional Budget Office’s projected deficit for 2022 fell by $118 billion since last July, the nation debt will skyrocket by $2.4 trillion more than previously expected between 2022 and 2031, thanks to Biden’s legislative changes.

Rising prices are likely to have a major impact on the 2022 midterm elections. “The American people are going to be furious, because they have figured it out,” said Harris. “When you spend that much money, and you print it at the Treasury, this is the logical result.”