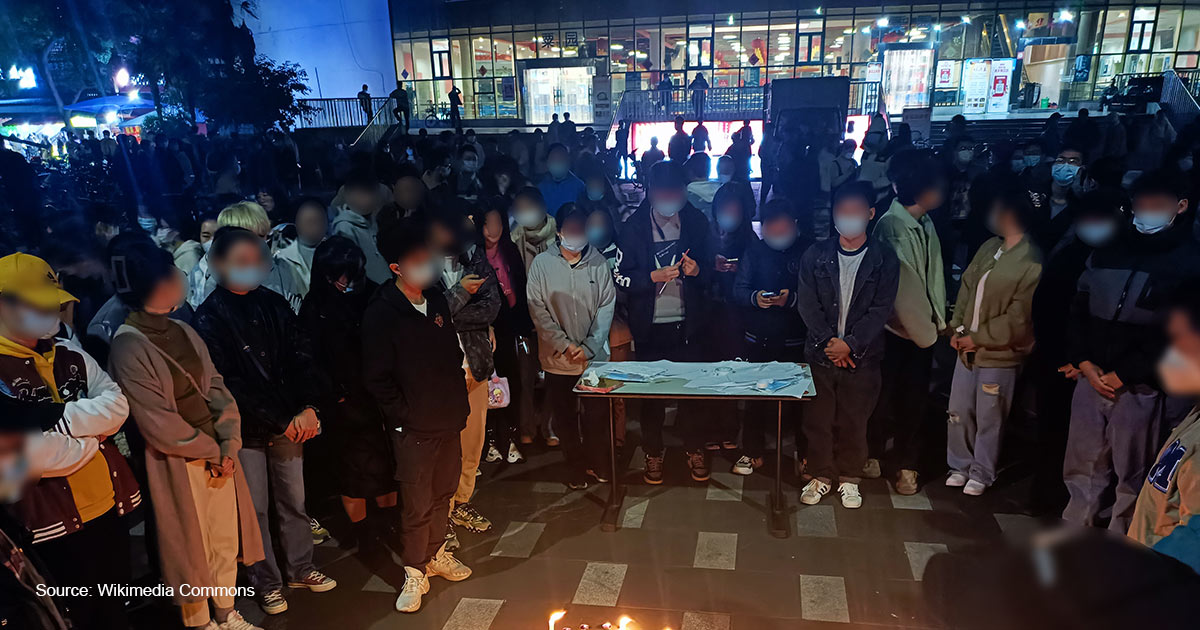 The Chinese regime is gradually escalating a nationwide crackdown after a fatal apartment fire in the city of Urumqi flared up into widespread protests against the central government. Sparked from a power strip on the 15th floor, the fire killed 10 people and injured nine, in part due to the Chinese Communist Party’s (CCP) “zero COVID” policy. Quarantine barriers obstructed firefighters from approaching the building, and mandatory locked doors (was it a prison?) prevented the victims from escaping. Despite relatively low infection rates, authorities in Urumqi, capital of the Xinxiang region, maintain strict quarantine measures.

The protests initially took authorities by surprise, with hundreds of protestors gathering in cities across China on Friday, Saturday, and Sunday. Many of the protestors called for the removal of Xi Jinping and the CCP, a rare occurrence in China. Xi was just elected to an unprecedented third term and given sweeping powers. Other protestors raised blank sheets of paper, a creative way to protest the CCP’s regime of censorship.

But the regime’s tolerance of protests is nearly gone. “The CCP has a long history of crushing any rebellion,” warned Family Research Council President Tony Perkins, host of “Washington Watch.” On Monday, protests dwindled as police continued to assault, pepper spray, and arrest protestors. Chinese police reportedly beat and arrested BBC reporter Ed Lawrence in Shanghai on Sunday night. The Washington Stand obtained a screenshot from a CCP-controlled WeChat message group, in which officials in the Xuhui District in Shanghai were urged to be on duty from 5 p.m. to 1 a.m. at strategic checkpoints to delete VPNs and “illegal” (uncontrolled) messaging apps like Twitter. Anyone caught with an illegal app would be warned not to reinstall them and reported to the police.

Bob Fu, FRC’s senior fellow for International Religious Freedom told The Washington Stand, “The crackdown will be precise, swift, and severe under Xi’s ruthless rule. Protesters will be quickly identified with the face recognition digital surveillance system that CCP builds during COVID. There will be massive arbitrary detention and many students will be punished with dismissing and other harsh disciplinary measures.”

Yet even while preparing to smother the protests, the CCP is incrementally pulling back on the draconian pandemic lockdowns that provoked them. In Urumqi, public transportation partially restarted on Monday, and delivery services resumed on Tuesday. In Beijing, officials promised not to lock residential buildings for longer than 24 hours at a time (how gracious of them). These conciliatory gestures may indicate the CCP would rather not quell a more severe uprising.

“The Communist Party has a number of problems. It’s lied to the Chinese people. It’s lied to the world, and it’s now boxed in,” China watcher Gordon Chang said on “Washington Watch.” “It doesn’t have an effective way of stopping disease other than isolation.” China’s vaccines, Sinovac and Sinopharm, are simply ineffective (even compared with American vaccines), and the government refuses to accept Western vaccines because doing so would tacitly admit the superiority of capitalist vaccines. Of the vaccines they do have, China’s centralized control structure has done a surprisingly poor job of vaccinating the elderly, the population most vulnerable to COVID.

Neither is the CCP willing to achieve herd immunity naturally. “The Communist Party, from the early months of the pandemic, tried to weaponize its handling of the disease by saying, ‘Look, the low numbers of infections and deaths in China proved the superiority of Chinese communism over American democracy,’” said Chang. “And so, they can’t allow any sort of herd immunity because that would raise the numbers and that would threaten Communist Party legitimacy.” Perkins noted, “Science would tell us … that if you don’t reach that level of herd immunity, you’re never going to get over the hump on this.”

The CCP seems to believe it can simply beat science into submission, but science is not a person that can be brutalized. For Mao’s adherents, political power might come from the barrel of a gun, but not the power to defy science. Reality is reality whether anyone is brave enough to stand up and acknowledge it or not. If a government defies reality for long enough, even its own subjects will cease to obey. China now has reached a point where “people are not putting up with Communist Party rule, whether we’re talking Hong Kong or whether we’re talking mainland China,” Chang said. The continuing protests demonstrate that the Chinese people “can be intimidated, they can be coerced. But once they see an opening, they go for it.”

The China protests carry serious ramifications both for the communist regime and other dictators. Chang explained that, “in 1949, the communists were able to take over China against a superior Chiang Kai-shek and his nationalists because the nationalists had lost people’s hearts,” and now the party has lost its support. “I can’t say that this month or next month the Communist Party will fall, but eventually it must, because this is now a struggle between the people and the regime.” China is “an instigator and influencer of many other dictators,” Perkins added. “If they teeter, it sends a huge message” about the dangers of oppressing a population.

China’s instability carries economic ramifications as well. The Dow Jones fell almost 500 points (1.45%) late Monday, as investors reacted to news of the protests in China. They feared that a combination of COVID lockdown measures and crackdowns on protests could stall production at factories in China, negatively impacting American companies. For instance, Bloomberg reported that disruptions at an iPhone factory would cause Apple to miss its production goals by six million units.

The fatal Urumqi fire, where residents died in locked apartments high above the ground, eerily echoes another fiery tragedy, the Triangle Shirtwaist Fire of 1911, where more than 100 garment workers died in a Manhattan factory because their employers had locked them in to prevent them from taking unauthorized breaks. The catastrophe galvanized support for America’s first workplace safety standards. While far less deadly, the Urumqi incident highlights the distorted priorities of putting a building’s residents at risk of death by fire, compared to the risk of mild sickness (to most young, healthy people) of COVID. Its long-range consequences remain to be seen.

Meanwhile, the rapidity with which the Urumqi fire swept across China, kindling blazes in more than a dozen major cities, indicates the population of China is full of dry kindling, ready to catch fire. The Chinese Communist Party would like to write the incident’s obituary under the title “Fahrenheit 1949: The Temperature at which Freedom Burns.” On the other hand, its embers just might kindle an uncontrollable conflagration of discontent, fumigating the world’s most populous country of Marxist oppression.