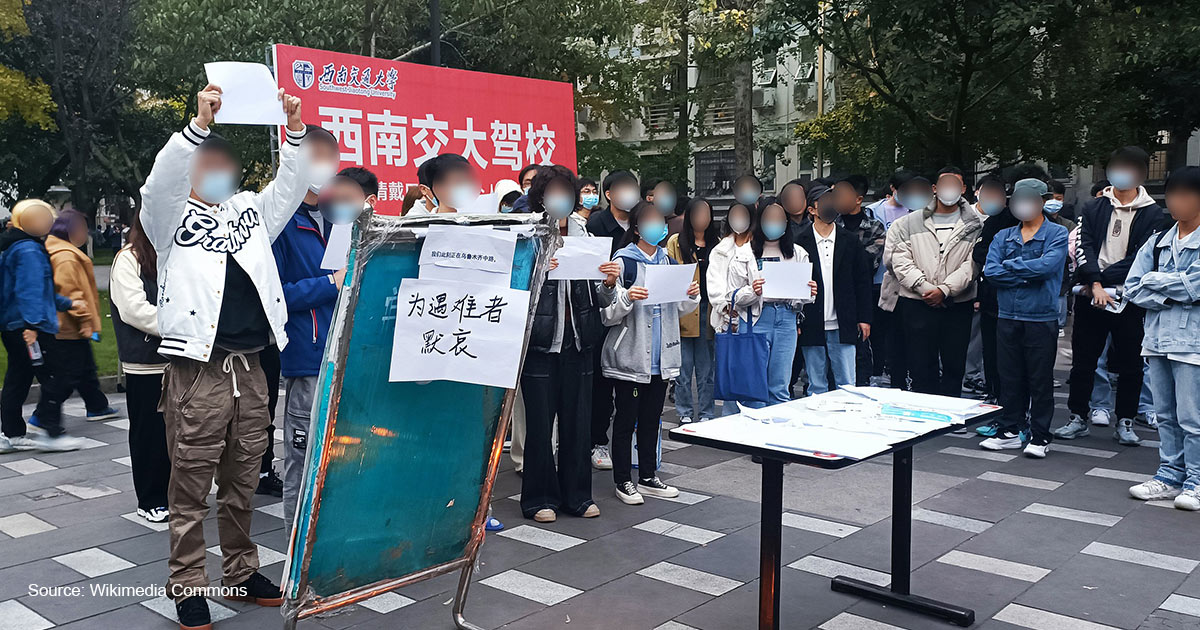 Rare protests across China were sparked on Saturday against the Chinese Communist Party’s (CCP) ongoing draconian COVID-lockdowns. The Chinese people have endured exceedingly tight restrictions affecting daily life since the beginning of the pandemic. One incident in the city of Urumqi seemed to be the final straw — igniting pushback after 10 people were killed in a fire when rescue efforts were hampered by the government’s “zero-COVID” policy.

On Saturday, hundreds of people gathered in Shanghai for a candlelight vigil to remember the victims. Black sheets of paper were held up across the crowd, symbolizing a protest against censorship. Some chanted, “Need human rights, need freedom!” Others called for President Xi Jinping to resign.

Three years of mass testing, quarantines, and frequent lockdowns have been a source of increasing strain for the Chinese people, who want life to get back to normal. Protests over the weekend occurred in more than a dozen cities. While police allowed the protests to take place on Saturday, several were arrested.

Of course, anyone in China wanting to express an opinion critical of the government will be censored on the internet or face swift arrest in person. Consequently, protestors have gotten creative. On the state-controlled internet, protestors ironically utilize positive messages, such as “yes,” “good,” and “correct” to signal their disagreement with government policies. At Tsinghua University in Beijing, students held signs with a math equation created by Alexander Friedmann, a Russian physicist whose name in Chinese sounds like “free man.”

Thus far, the Biden administration’s only statement has come from a U.S. National Security Council spokesperson, who mainly addressed China’s COVID policies, saying, “We think it’s going to be very difficult for the People’s Republic of China to be able to contain this virus through their ‘zero-COVID’ strategy.” However, the spokesperson did affirm a general right to peaceful protest, adding, “We’ve long said everyone has the right to peacefully protest, here in the United States and around the world. This includes in the PRC (People’s Republic of China).”

By Monday, a heavy police presence was deployed across major Chinese cities to shut down any protests, stifling the open unrest. Chinese state media is making a propaganda push by reinforcing support for Xi Jinping’s rigid pandemic strategy. The widespread protests provide an opportunity for U.S. leaders to pick up where protestors left off and magnify their protests, even if Chinese authorities are successful in shutting them down. It takes a great deal of courage to take a stand while living under a powerful and oppressive government. The free world should not let the brave risks of these protestors go to waste.

For years, Chinese leaders have operated under the idea that as long as the government facilitated economic opportunities for the Chinese people, citizens would tolerate a certain level of political repression and restrictions. Current unrest across the country might signal the beginning of the end of this thinking. The Chinese people deserve the freedom and basic human rights that they’re asking for. We must join them in boldly calling for the end of tyranny in China.