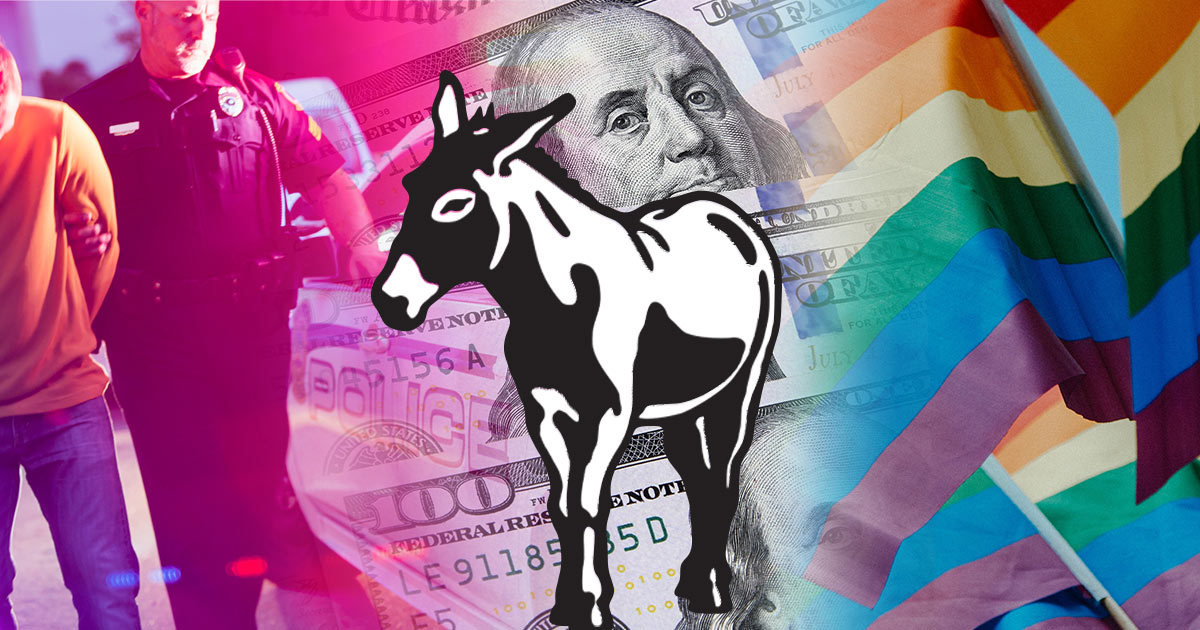 President Biden on Wednesday reprised his “Emperor Palpatine” speech at Independence Hall with another ominous message delivered at Union Station in Washington, D.C., where he warned that “democracy itself” was at stake if “extreme MAGA Republicans” triumphed in the 2022 midterm election. Despite democracy’s obvious popularity among voters, the president’s warning doesn’t seem to be breaking through; final polling shows Republicans poised to win the U.S. House, and possibly the U.S. Senate, in a medium- to large-sized “red wave.”

Wafting through the speech was the Democrats’ aroma of desperation as they struggle to find any winning issue to stump through Election Day. Since July, Democrats have piled all their chips on abortion, hoping voters would punish Republicans for the overturning of Roe v. Wade, overriding usual midterm trends. They spent nearly $320 million in political ads on abortion, 10 times more than they spent on inflation. Despite the emphasis, the highly anticipated “Roevember” has turned out to be as imaginary as a “medically necessary” abortion. When Democrats leaned into abortion, the issue proved to be a paper wall.

Without abortion, Democrats don’t have much to campaign on. They can’t win by talking about inflation, the economy, crime, immigration, the military, or even education. Confident in abortion’s potential for electoral success, Democrats leaned into partisan priorities like climate spending and transgender ideology, steadily alienating persuadable voters on all the other issues.

Democrats have resorted to scraping the bottom of the barrel to find arguments voters don’t hate them for. Biden claimed on Friday that Republicans “want to cut Social Security and Medicare,” resurrecting a decades-old talking point largely irrelevant to the most pressing issues. They have also resorted to impoverishing the nation with widespread handouts. In recent weeks, President Biden has further depleted the strategic petroleum reserve, illegally cancelled student loan debt, and issued mass pardons for drug-related offenses.

Some Democrats have suggested they have failed to connect with voters because of messaging. Hillary Clinton said Thursday on CNN, “The work that is being done by the Democrats … is truly impressive, and we’ve got to get that message across more effectively.” Senior Biden advisor Keisha Lance Bottoms agreed Sunday on CBS, “There’s been a lot of misinformation flooding the airwaves … so it is more difficult to get the message out, but I’m sitting here today getting the message out.” And Stacey Abrams suggested Sunday on MSNBC that she was lagging in the polls because “Black men have been a very targeted population for misinformation.” Democrat messaging only fails because it is drowned out by “misinformation,” they suggest.

But a candid moment from a Biden speech on Sunday suggests a different explanation. The president responded to an anti-oil heckler, “There is no more drilling. I haven’t formed any new drilling.” The impromptu comment was intended to deflect what Biden felt was an unjustified criticism of his record, but it undercut the regular White House narrative. Regularly on the defensive about high energy costs, only last week the president remarked, “I know we have a lot of leases out here in New Mexico for oil companies. And we haven’t slowed them down at all. They should be drilling more than they’re doing now.” That confusing blame-shift was unconvincing because it contradicts what voters know — energy costs remain high.

The messaging problems run deeper than confusion and contradiction. Undeterred, Biden on Friday promised more devastation for America’s energy industry, predicting, “We’re gonna be shutting these [coal] plants down all across America, and having wind and solar.” That’s an odd closing message to an electorate whose chief concern is rising costs. It isn’t that voters don’t know what Democrats stand for. Rather, they do know — both their policies and their future intentions — and they aren’t impressed.

Democrats have the same tarnished image on crime. Last week, New York Governor Kathy Hochul (D) dismissed the crime problem as a “conspiracy” by “master manipulators” (she later retracted the statement). But the rising crime isn’t made up. Major felony arrests are up 25.8% this year (39,742) over the same period last year (31,582), according to the NYPD — after skyrocketing in 2020 and 2021. Violent assaults have even marred the gubernatorial race: Republican challenger Lee Zeldin was attacked at a rally, his teenage daughters were home alone when a shooting occurred outside, and one of his supporters was assaulted at a Hochul event Monday. Yet one Democrat operative criticized New York City Mayor Eric Adams (D), who campaigned on law and order, for being “an essential validator in the city to make [Republican] attacks seem more legit and less partisan.”

Also last week, The New Yorker Magazine ran the derisive headline, “I, a Conservative, Am Terrified by the Crime in a City I’ve Never Been To.” But distant Republicans aren’t the voters they have to convince. Rather, it’s urban minority voters and suburban independents who are poised to give Democrats grief over crime, by either staying home or voting for their opponents. A recent Pew study found 82% of black Democrats considered crime a top issue, compared to 33% of white Democrats. You can’t spin voters on issues they have personally experienced.

The same political calculation holds across issue after issue. There is no crisis at the southern border, argue national Democrats. Voters near the border disagree, and some signs indicate that Latino voters in Nevada, Arizona, and southern Texas are transferring their allegiance to the GOP. Our democracy is in crisis, warn Democrats and media voices. Yet more voters see Democrats (33%) as a “major threat to democracy” than Republicans (28%), according to a New York Times-Siena poll from October. To voters, inflation is the most important of all. Yet Democrats were reluctant to acknowledge it as a problem, and even more reluctant to do anything about it — like cutting deficit spending. Their so-called “Inflation Reduction Act” actually had an impact “statistically indistinguishable from zero.”

Democrats’ extremism is most vivid on social issues. While not the most dominant election issues, they remain highly important to certain voters, including the most religious voters. President Biden has promised to make extreme abortion legislation, preventing any state restrictions and guaranteeing taxpayer funding, his top legislative priority for the new Congress if Democrats win both chambers of Congress. But 65% of Americans would rather ban abortion after 12 weeks — or earlier. Leading up to the election, President Biden sat down at the White House with a teenager who identifies as transgender to promote gender transition procedures for minors. But 79% of Americans believe minors should wait until they turn 18. Yet Democrats are campaigning straight into the teeth of such overwhelming majorities, hoping their “messaging” will somehow carry the day.

Some Democrats are frustrated with their party’s decision-making and understand this will cost them dearly at the polls on Tuesday. “I’m a loyal Democrat, but I am not happy. I just think we did not listen to voters in this election, and I think we are going to have a bad night,” admitted Hilary Rosen on Sunday. “When voters tell you over and over and over again that they care mostly about the economy, listen to them. … Voters have told us what they wanted to hear. I don’t think Democrats have delivered this cycle.” Democratic think tank Third Way found in late October that 56% of likely voters (with an oversample of swing voters) “say Democrats are not focused enough on the economy.” They summarized their findings, “voters see Democrats as just as extreme [as Republican candidates], as well as far less concerned about the issues that most worry them.”

Somehow, many Democrats have convinced themselves that their problem remains, primarily, one of deficient messaging. But voters have gotten the message loud and clear — and rejected it. Voters prefer a party that is willing to tackle the kitchen table issues, and less willing to indulge in social extremism. They appear poised to award control of Congress — at least the House — to Republicans. The main unanswered question is, will Democrats and Republicans learn from this election the important lesson of listening to voters’ concerns, and solving problems rather than spinning them?